Responding to the need 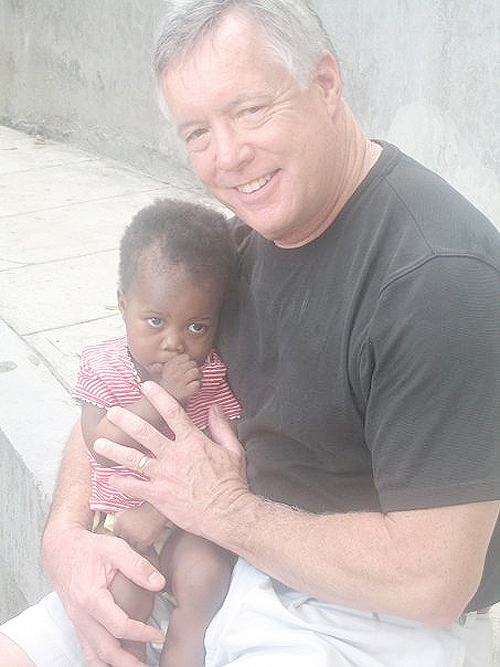 Parishes and schools in the diocese provide help for Haiti

Health care, political scandals, basketball championships — the stream of news has carried on since the Jan. 12 earthquake in Haiti dominated the headlines.

But the rubble, the thirst and the need are still there.

On Friday, March 19, Bishop Robert J. Cunningham and Joe Slavik, diocesan director of Catholic Charities, presented a check for $617,877.31 to Catholic Relief Services (CRS). The donations are still coming in.

Bishop Cunningham said the money raised is a sign of the generosity of the people of the diocese and their willingness to help those in need. “It’s a great sign of our solidarity as a church that Catholic Relief Services was in Haiti, that they were right there to help,” Bishop Cunningham said.

Slavik said the money came from parishes, business contributions, individual donors, and even from Catholic school students who donated the change they had saved for chocolate milk and ice cream.

Students at Our Lady of Sorrows/Seton campus collected medical supplies and raised $1,000 to donate to CRS. The Church of the Holy Family in Vernon donated part of their Lenten fish fry proceeds to Haiti. Students at Holy Cross School in DeWitt donated the proceeds from a crazy hat day, paying a few dollars to wear a hat to school.

St. Bernard’s Parish in Waterville has donated nearly twice the amount of its weekly collection to help those in Haiti. The parish of about 300 donated almost $4,500, and that’s without a special second collection. The money was put in a poor box in the church.

“I was astounded,” said Father Thomas Servatius, pastor St. Bernard’s. He said he believes the generosity stems from his parishioners’ empathy for the Haitians. “I think part of it is that we have a number of farming families who also know what it’s like to struggle, and we have a fair amount of rural poverty in the area, and I think people can relate to that.”

St. Elizabeth School of Radiography in Utica held a bake sale that raised over $1,700 for Haiti. The event was organized by clinical instructor Theresa Brindisi and students Kayla Elsasser and Deanna Hillman.

Over $1,000 came from a fashion show held by Bilaya Jackson and Me’lisa Matthews at Delavan Art Gallery. Jackson was in attendance at the CRS press conference in the Syracuse Diocesan Chancery. “I thought we should just donate the money to the people in Haiti because they need it more than we do,” she said.

Maureen McCullough, regional director of the northeast and mid-atlantic regions of Catholic Relief Services, said the organization has received over $100 million for Haiti so far. “To me that is a remarkable, remarkable testament to the love that the American Catholic community and others have,” she said. “Ninety-four cents out of every dollar that is raised and contributed to Catholic Relief Services goes to direct programs on the ground. We work with the people there and we benefit so much from the generosity of the people here.”

In an interview after the press conference, McCullough said the money raised for Haiti represents the largest emergency relief effort in CRS’s history. She said 60,000 people have received emergency shelter so far with a goal of providing shelter for 200,000 by the end of April.

Access to fresh water and sanitation services has been provided to 10,000 families so far, but CRS has a long-trem goal of expanding that  help to reach 40,000 families.

Over 277,000 people have received food through CRS, but within the next six months that number is expected to reach 600,000.

There are also safe spaces available for children to play and be together. The goal is to provide 25,000 child-friendly spaces.

Slavik said he hopes to incorporate more of CRS’s educational programs in the diocese. “We just want to let people know of the importance of CRS,” he said. “We want to have a close tie.”

Other parishes throughout the diocese have formed ties of their own to Haiti through parish twinning programs.

St. Michael/St. Peter Church in Syracuse has been twinned with Immaculate Conception Parish in Chauffard for about 10 years.

Deacon Greg Cross has gone to Haiti twice to help those in Chauffard, which is a tiny village located in the mountains southwest of Port-au-Prince and very close to the earthquake’s epicenter. He hopes to go again within the next month or so to help the community rebuild.

“Needless to say the parish and the buildings they had there are pretty much destroyed,” he said.

Deacon Cross and his two daughters have gone to Haiti as part of a medical clinic that was set up to help people, many of whom had never been seen by a medical professional before.

While the people the Crosses became friends with were unhurt, the damage to the village is profound. There are 1,900 elementary-aged children throughout the parish, Deacon Cross said, and now classes are being held outside because the school is no longer structurally sound. The church is also unsafe, and Masses are being celebrated outside as well.

Deacon Cross said he hopes to be able to go down to Haiti in another month to six weeks.

“Once you’re there and you see how faithful and appreciative the Haitians are, you’re completely in love with these people,” he said.

This is a love Deacon Cross’s daughters feel, too.

“It was amazing to me. I’ve lived in suburbia all my life and I’d never seen anything like that,” said Catherine Cross. “It’s absolutely heartbreaking. You see kids walking in the street and you know they have no one. You’d see a six-year old holding the hand of a three-year old and they’re walking around trying to find food.”

Catherine accompanied her father on both of his trips to Haiti, and she said they were the most important trips she has ever taken.

“You come home and then all of the little things you find annoying, like the traffic or whatever, you have to compare it to these people who have absolutely nothing in their lives and they are so happy,” she said, “And you think, ‘What should I really be concerned with in my life?’”