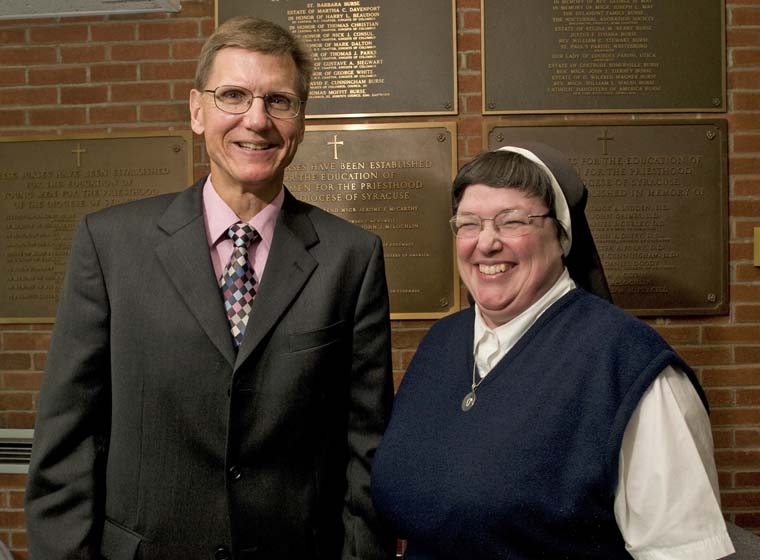 Editor’s note: At the Catholic Schools Office’s Light the Way dinner Jan. 23, attendees paused for a moment of silence to honor a dedicated educator who gave much to the diocese over many years.

Sister James Therese Downey, OSF, taught at schools in Syracuse, Fulton, Oswego and East Syracuse, as well as schools in Camden and Clayton, New Jersey. Most recently, she served at Bishop Grimes Jr./Sr. High School for 18 years as a teacher, assistant principal and principal before leaving to become the Formation Minister for the Sisters of St. Francis of the Neumann Communities.

Sister JT passed away Jan. 14; her Mass of Christian Burial was celebrated Jan. 20 at Holy Family Church in Syracuse. Msgr. George Sheehan, former Bishop Grimes principal and Vicar for Catholic Educational Advancement, offered the homily, which he has allowed the Sun to reprint here.

On behalf of the Downey family, expressions of thanks go to her Franciscan sisters at St. Mary of the Angels in Williamsville, especially Sister Margaret Therese and the medical and support staff at Roswell Park Cancer Institute, and, closely following, her dear friends Sister Alvera, Sister Helen and the entire community of the Sisters of St. Francis. Thanks also to Father Prior, Father Hage and the staff here at Holy Family for making possible the funeral.

To the Downey family go our prayers and condolences from Bishop Cunningham, priests, deacons, men and women religious, as well as the people of the diocese. We also wish to thank you, her family, for sharing Sister JT’s life and gifts with us. How she loved her family, and in a special way her nieces and nephews.

However, since Sister JT will no longer be a regular customer, two companies plan to downsize: Oreo cookies and Idaho potatoes.

This afternoon, I ask that you reflect with me on the life and miracles surrounding this woman religious steeped in Irish tradition from Tipp Hill.

In prayer many — most — of us were focused on one miracle, one cure — cancer. It happened, we believe, through the intercession of St. Marianne Cope — even though she [her remains] was being transferred back and forth from Hawaii to New York to Hawaii.

So let us go back to where the journey began. On October 7, 1956, Maurice and Jeanne presented their daughter Margaret Philomena to the Holy Family parish community for baptism, making her a child of God and heir to God’s Kingdom, thus securing her a place among many of God’s dwellings. Anointed with Sacred Chrism, the words “As Christ was anointed Priest, Prophet and King, so also you” became the pathway of her life. Priest: one who serves.

Prophet: one who teaches. King: one who leads.
Priest: one who serves. Being open to the needs of others was a spiritual trait learned early in life as the big sister. Focusing on others made her ever aware of her mission of service – to see the needs of others. Her presence brightened every occasion with a captivating smile, with heartwarming laughter, and she even made a “no” response seem like a “yes.”
Prophet: teacher. The highly educated became the educator for 30 years, but not behind a desk. Her teaching was far beyond content — she was a salesperson for Jesus Christ. Christ was the fabric of her constitution, weaving always a simplicity of life wrapped in the garment of Francis and Clare — a Franciscan in spirit long before her final vows August 6, 1984.
King: leader. Today, this church is filled with individuals whose lives she touched by bringing them closer to Christ and Christ closer to them with gentle words of encouragement and forgiveness. She loved people, especially kids. But the strength of presence, in imitation of Virgin Mary, reflected the words of St. Francis: “Preach the Gospel, and when necessary, use words.”

After serving in schools and assisting in parishes in the Dioceses of Syracuse and Camden, New Jersey, the leadership of her community, recognizing this Spirit-filled person, called her to be the formation minister, preparing women to take on the mantel of Francis and Clare.

However, a new and incurable sickness and miracles claimed her future and life. From a Gethsemane of pain, her life at Roswell confirmed Christ’s mission for her: priest, prophet, king.

The bed of pain became the pulpit of life for residents and staff who were captivated by her patience, appreciation, kind “thank you’s” and quiet suffering which led her to inspiring the many — a miracle.

On Monday, January 12, Sister JT was anointed and received the Eucharist, and was asked, “Sister JT, what do you want to do?” With a gentle smile and clear response she said, “I want to go home.” Tuesday the word went out to staff — doctors, nurses, aides, maintenance — and with tears, smiles, goodbyes, staff and residents filled her room. Her gifts to them were her love and the last shipment of Oreo cookies from Bishop Grimes.

Against all odds, the miracle ride began and she journeyed home — a long ambulance ride from Buffalo to Syracuse. Upon an earlier than expected but timely arrival, her Sisters at Franciscan Villa filled the foyer to sing the welcoming song of Hawaii with tears, laughter, applause. She made it home! A miracle.

On the following day, she sought her promised, permanent dwelling place as an anointed priest, prophet and king, a faithful daughter of Francis and Clare, and she heard the Gospel message of Jesus: “Welcome Sister James Therese Downey — remember I told you I was going to prepare a place for you.” Welcome home!