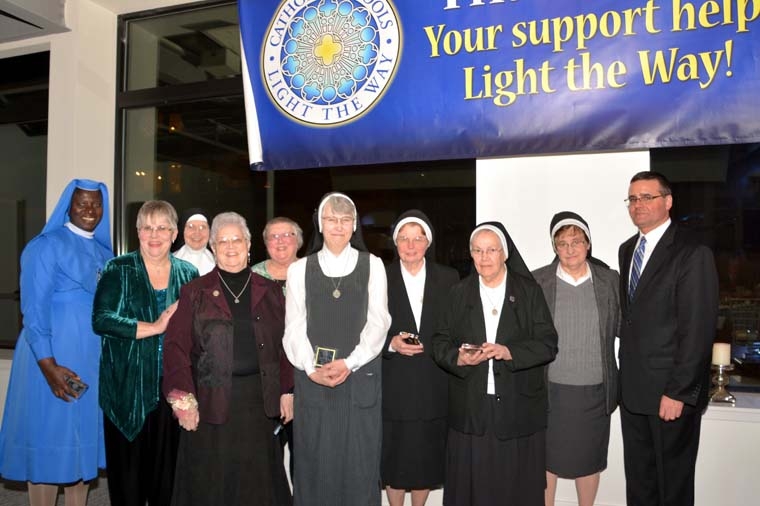 Some shining lights in Catholic education were honored Jan. 23 as the diocese’s Schools Office held its annual Light the Way dinner.

More than 400 people filled the SKY Armory Event Center in Syracuse that evening in order to celebrate educators, volunteers and alumni who have made meaningful contributions to Catholic education in the Diocese of Syracuse.

“We are proud that our 22 schools open their doors to our youth, challenging them to take up the torch of faith extending from the beacon of Christ’s message to all of us,” Superintendent Bill Crist told the crowd. “This evening we recognize our angels who light the way, acknowledging a quiet shadow of accomplishment, dedication and service to the children and families throughout our Catholic schools.”

This year’s Light the Way Award, honoring an individual or organization that “has served the Catholic schools of the diocese with distinction over a period of years,” was presented to 21 women religious who serve in the diocese’s Catholic schools.

“Sisters have been part of our Catholic schools in the Diocese of Syracuse since its inception. While many more sisters and their related communities have contributed to our schools over the years, tonight we honor those sisters who in this school year play a positive role in our schools’ success,” Crist said, noting that, together, the sisters honored “have totaled 803 years of service to our schools in supporting their mission of Catholic education.”
The women religious honored are:
• Daughters of Charity Sisters Helen Gertrude Carroll and Paula Gallant, both of whom minister at Notre Dame Jr./Sr. High School in Utica;
• Felician Sister Therese Marie Kodz, who serves at Notre Dame Elementary School in Utica;
• Immaculate Heart of Mary, Mother of Christ Sister Mary Joana Baidoo, whose ministry includes reaching out to refugee and immigrant families and assisting them through transition and education;
• Missionaries of the Heart of Jesus Sister Brigid O’Mahony, who teaches at Seton Catholic Central School in Binghamton;
• Franciscan Sisters Marcia Barry of Bishop Ludden Jr./Sr. High School in Syracuse; M. Nicolette Vennaro of Blessed Sacrament School in Syracuse; Alvera O’Grady of Holy Family School in Fairmount; Bernadette Joseph Kupris of St. Mary’s Academy in Baldwinsville; Mary Jogues Goldsmith of St. Rose of Lima School in North Syracuse; Laurita Kelly of St. Rose of Lima School; and Catherine Laboure Miller, principal of St. Rose of Lima School;
• Sisters of St. Joseph of Carondelet Rosemarie Freitag, of Bishop Grimes Jr./Sr. High School in East Syracuse; Mary Ellen Shirtz, who has ministered at Bishop Grimes, Bishop Ludden and the Catholic School Office; Anna Mae Collins, principal of Notre Dame Jr./Sr. High School; Jacqueline Johnas of Notre Dame Jr./Sr. High School;
• Sisters, Servants of the Immaculate Heart of Mary Sisters Agnes Shaw of All Saints Catholic School in Endicott; Mary Ann Remus, who ministers in the Broome County Catholic Schools; Sister Helen Ann Charlebois, principal of Cathedral Academy at Pompei in Syracuse; Sister Joan Ottman of Most Holy Rosary School in Syracuse; and Kathleen Joy Steck of Seton Catholic Central in Binghamton.

Father Richard P. Morisette of St. Stephen the King Church in Oswego and Patricia Schramm of Bishop Ludden Jr./Sr. High School were honored with the Witness to Faith Award. The award is presented to a Catholic school educator who “is not simply a professional person who systematically transmits a body of knowledge in the context of a school; ‘teacher’ is to be understood as ‘educator’ — one who helps to form human persons.”

Father Morisette “is described by his many supporters as an exceptional role model for the students, faculty and staff at Trinity Catholic School in Oswego,” Assistant Superintendent Cheryl Canfield said in presenting his award. “Since his retirement, Father Morisette has volunteered as the school chaplain. He is always willing to do whatever he is asked to do to support the school.” Having served at 10 parishes over more than 50 years as a priest, Father Morisette can now often be found “eating lunch, reading in the classrooms or singing songs with the students.”

Schramm began her service at Bishop Ludden some 38 years ago as a counselor in the Alcohol Abuse Prevention Education Program; she has also served at Holy Trinity, Pompei, St. John the Baptist and Cathedral Academy at Pompei Schools. Schramm “is described as having a keen sensitivity to all children. She has always treated all students with great gentleness and utmost respect. She has the gifted ability to communicate with children and parents at sometimes the most difficult times in their lives,” Canfield said. Schramm said she was honored and grateful to receive the award, and thanked her family, friends, colleagues, students and spiritual teachers. “I celebrate each one of you for saying yes to God’s call,” she said.

The Distinguished Alumni Award, given to an alum of a Catholic school within the diocese who has “successfully used the values they learned in Catholic school to make a positive impact on the world” and who has remained connected to Catholic education, was presented to Terry Gallagher, Broome County Catholic Schools, Class of 1989.

“Terry was nominated by St. James School in Johnson City for being a true example that Catholic education can be used both inside the building and outside on the athletic field. He has given back to the community by creating the Little Saints youth sports program where elementary school children learn the values of good sportsmanship and teamwork on the athletic fields,” Canfield said. A principal at the law firm of Gallagher & Thompson, PC, Gallagher is also a member of the Catholic Education Foundation of the Southern Tier School Board.

Gallagher said he did not deserve the award but accepted it as an honor to his parents. “Catholic education was not one choice of many – it was the only choice,” he said. Gallagher recalled Catholic schools as a place of enjoyment and lifelong friendships for him and his siblings, as well as a place of daily affirmation and strengthening of faith. Seeing his children form the same bonds he made with his Catholic school classmates reinforces daily the decision to send them to Catholic schools, he noted with thanks to the families and staff who work to make Catholic schools great.

Paul Quinlan of St. Mary’s School in Cortland was presented the Superintendent’s Service Medal, honoring “a member of the school community who has given a significant amount of service to the school in the form of volunteer hours.”

Quinlan “always exemplifies the spirit of Christian service and volunteerism,” Canfield said. A graduate of St. Mary’s School and later SUNY Cortland, Quinlan served in the U.S. Navy and the Cortland Fire Department. President of the parents’ guild and a benefactor of the school, Quinlan “assists once a week at lunch and volunteers wherever he is needed,” Canfield added.

“Although I was selected to receive this award this year, I did not do this by myself,” Quinlan said, offering thanks to former principal Sister Harriet Hamilton, OSF, current principal Denise Hall, teachers and staff who have endured his “horrendous jokes,” and his wife Linda for allowing him to “exercise my passion for the school.”