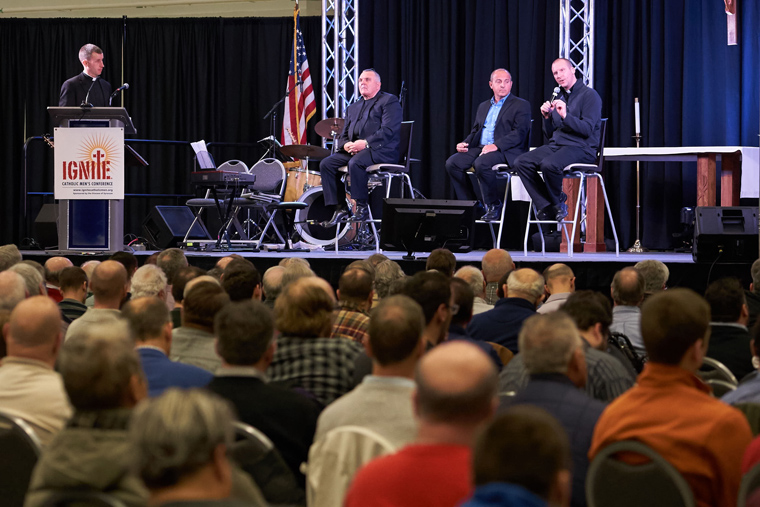 Hailing from every corner of the diocese and beyond, more than 800 men gathered at Syracuse’s SRC Arena March 19 for the 8th annual IGNITE Catholic Men’s Conference. The theme of this year’s event, fitting for the Jubilee Year of Mercy, was “Merciful like the Father.”

The daylong conference began with Mass celebrated by Bishop Robert J. Cunningham, who reflected on a well-known father figure whose feast day coincided with the conference: St. Joseph.

“St. Joseph has much to say to us. He is an example of a person who gave himself to God by giving himself to his family,” Bishop Cunningham said in his homily. “He stands before us as a dreamer and puts us in touch with the very dream of God Himself. As we celebrate Holy Week, may we know more fully in our lives the ‘dream of God’ by taking time to be with Him more in prayer, especially in the Eucharist, to participate more fully in family life and the life of the Church.” [Editor’s note: Read the full text of Bishop Cunningham’s homily on page 3 of this issue.]

The day’s first speaker was Randy Raus, president of LifeTeen and a longtime youth minister. A convert to Catholicism, Raus was brought to the faith by his wife.

Raus also spoke of a once-in-a-lifetime meeting with soon-to-be-saint and great example of mercy Mother Teresa. During her visit to Atlanta to open a Missionaries of Charity home, Raus had the opportunity to pray with her, speak with her, even hold hands with her. The experience changed his life and deepened his faith, he said.

Raus urged attendees to take the Year of Mercy as a time to reflect on their faith and how they can be the difference in the life of another. “God’s mercy is as vast as the ocean,” he said.

Following lunch, Father Joe Freedy lit up the stage with a fast-paced, high-energy talk. Vocations director for the Diocese of Pittsburgh, Father Freedy started with a tale from an airplane, where he met a man unhappy despite his successes and wealth. Father Freedy told the man how God loved him and had a plan for him and how “none of these [worldly] things are fully going to satisfy your heart because that’s not actually what your heart is made for,” he said. “Fellas, the first thing I want to say to you is this: That we all want God. That we’re all looking for God. That’s the deepest desire of the human heart… We’re made for an infinite love, and the only one who can love infinitely is God.”

Fear is the root of all sin, Father Freedy explained. “Jesus Christ’s love is the only thing that can cast out your fears,” he said.

The “only way we can receive the love of God is to be vulnerable to it,” he told the crowd before leading them in a special prayer: “Jesus, help me allow you to love me.”

“That receptivity of his love is what will bring your heart to life and make you the man that you know you are called to be,” he said.

The legendary Rudy Ruettiger rounded out the speaking lineup, charming the crowd with his personal challenges and triumphs, a story made famous by the film “Rudy.”

One of fourteen children growing up in a Catholic family in Joliet, Ill., Ruettiger dreamed big. His heart was set on playing baseball with the Yankees, on going to the moon, on playing football for Notre Dame. But he struggled academically, only learning later that he had dyslexia, and he began to believe the unkind things his classmates said about him.

Ruettiger worked at a power plant after high school, then joined the Navy. There, his positive attitude and work ethic got him noticed — and encouraged. He started to dream about Notre Dame again, he said, though he didn’t have the money or even the SAT scores. “I refused to listen to the negative and the devil,” Ruettiger said. “I listened to the voice of empowerment, the voice of positive. You outwit the devil through positive thinking…. You look at what you’re going to be, not what you’re not. You look at what you can be, not what you can’t be.”

After the Navy, he chased his Notre Dame dream. After four successful semesters at Holy Cross Junior College and persistence with the Notre Dame staff, he was finally accepted — and was able to play for the Fighting Irish.

Ruettiger was finally able to dress for a game in his senior year. And in the last 27 seconds of the only play in the only game of his college football career, Ruettiger sacked the quarterback. His teammates carried him off the field.

Those shining seconds would later be recreated in the movie “Rudy,” another dream chased to fruition by Ruettiger — all the way to a screening at the White House.

“So stretch, and reach for the positive,” he said. “And stretch and keep stretching. Because it’s going to happen, if you visualize where you want to be.”

Next year’s IGNITE Catholic Men’s Conference will he held March 25, 2017. Speakers will include Msgr. Jim Lisante and Mark Houck.