Brady Faith Center off to the farm 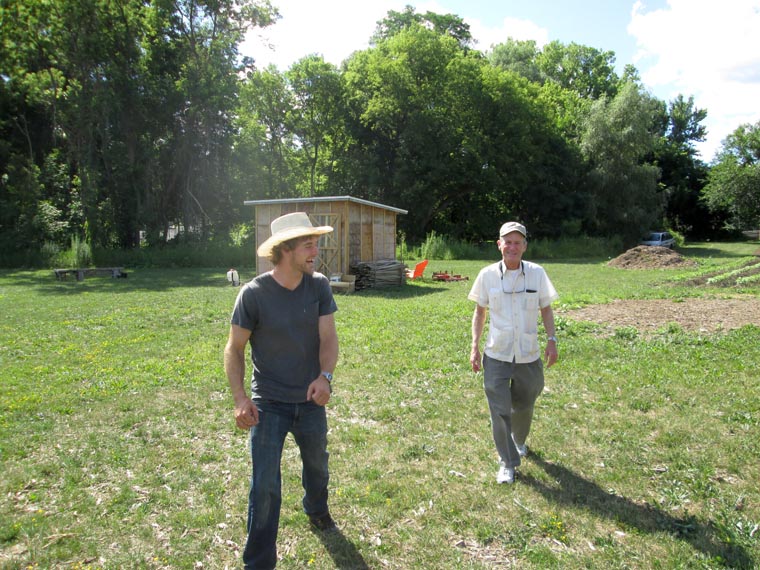 The Brady Faith Center, ever fond of gardens, has graduated to the farm.

In the Valley of Syracuse, a mouthwatering collection of plants has sprouted, drawing startled looks.

On a 5.8-acre lot where there was nothing but some grass and the ghost of a razed housing complex, the Brady Faith Farm team has tilled and filled. The manager even gets a thrill out of it.

“Quite a tract for an urban setting,” said Roy Durgin, who manages the farm, which borders Onondaga Creek, the Southside Academy Charter School, and a residential neighborhood.

Since farming is such an unusual practice in the city, in July the Brady Center obtained a zoning variance in order to start planting.

The Brady Faith Center’s mission is to offer programming — including Bible studies, a bakery, and youth outreach — for people on Syracuse’s South Side. So how does a farm aid that mission?

Farm Coordinator Jessi Lyons described it this way to neighbors in a pre-planting letter:

“The goal of the project is to take advantage of this unused open space to create jobs, grow nutritious and affordable food, create more outdoor and hands-on educational opportunities for kids and adults, and create a place for neighbors to enjoy.”

In an interview last week, Lyons added that Brady’s mission is to serve South Side people in mind, body, and spirit, and food is critical to all those things.

Lyons, Durgin, and the farm’s major donor, Charles Reller, of Reller Risk Management LLC, of East Syracuse, also said that the soil has been tested and found to be uncontaminated. Durgin said clean fill has been spread on the ground.

The farm is not technically an organic farm, but Lyons said the farm practices pest-prevention by using naturally derived chemicals.

The Brady Center leases the parcel with an option to buy from Home HeadQuarters, Inc., in Syracuse. The farm has a handful of full- and part-time employees now, and the organizers hope the staff grows. Schoolchildren have also helped out this season.

When harvest time comes, the object is to sell a big portion of the crops at a discounted price to people who live on the South Side.

“Our goal is to be as low [in price] as anybody or right around there, or hopefully even lower because it’s local,” said Brady Faith Center Executive Director Kevin T. Frank.

The farm has already sold some produce at Onondaga Park and Kirk Park in Syracuse, and at off-site stands.

Since this is the first season of operation, the sales model is not complete, but other possible outlets are farm stands, stores, restaurants, and participants in community-supported agriculture, known as CSA.

CSA means that people commit to buying a box of food weekly or biweekly at a pickup center. It is a very popular way of supporting local farms, Lyons said.

She said most people who visit the farm get some type of treat. But the farm is not economically viable, she said, unless it obtains donations and grants.  A grant from the Onondaga County Agriculture Council, for example, will help with production and distribution of the crops, Lyons said.

Frank said he hopes that the farm is 60 percent self-sustaining. One way to supplement that would be to find sponsors who would pay half the price of a box of food for 10 families.

The idea is to infuse the farm with funds that supplement Reller’s contribution.

The farm took years to develop. One of the earliest inspirations for it was a youth who told Frank that the South Side needed some energy.

“We just thought there’s so much energy around plants that grow,” Frank said.

Reller, who lives in Manlius, agreed. He had been searching for a mission and a partnership with a not-for-profit. One day he attended a Brady breakfast at the invitation of a board member.

Reller developed a good feeling about Brady, and he walked the neighborhoods with Frank, mentioning his interest in urban agriculture.

And now the farm is functioning, even if some people consider it a large garden. “It’s a developing farm,” Reller insisted with a chuckle.  His donation, Lyons said, allowed the farm to remove trees, install a water supply, buy a tractor, and build a tool shed. Reller even helps with the work. After pounding stakes into the ground, “I went home very, very tired that evening,” he said.

Reller gave credit to Josall Roofing, of Syracuse, and Slate Hill Constructors, Inc., of Warners, for their assistance with the farm project.

Brady does have two other gardens, one tiny one right next to the center on South Avenue, and a bigger one called the Stone Soup Community Education Garden on Gifford Street in Syracuse.

“The Lord has given us this earth,” he said. “What we DO with it is our choice. It can be good, or it can be bad. Our choice is: Do something good with what God has given us. We didn’t make it; God did.”

If they are the “nacho chip” and “little tortilla” of gardens, the farm off Valley Drive is the “big enchilada,” Brady Center Coordinator Trevor Williams said.

The farm stretches for about 200 yards. Strong plants poke up through carefully laid out black tarp, grapes climb where the workers are putting in a tiny arbor, and beans and tomatoes try to hold on against the onslaught of deer that raid at night. One day there might be a fence to prevent the deer’s predations. Durgin would like to add a greenhouse too.

The fennel is a frilly plant that looks fuzzy from a distance. Other crops include shiitake mushrooms, berries, watermelons, pumpkins, broccoli, beans, corn, okra, chard, purple and green cabbage, carrots, cucumbers, zucchini, and yellow squash. Swiss chard features wrinkled leaves with red veins, as if it’s grown with wine and not water.

The whole enterprise bakes in the sun under the keen eye of the manager, Durgin.

“I love it,” Durgin said of farming. “I love being immersed in the plants.”

The neighbors love the farm too.

“They’re doing a good thing for the community, and it’s also making the community look nice,” said Sheashona Begeal, who lives on Medora Place only about 100 yards from the farm.

“I even went down there to speak to them, and asked them if I could help,” she said.

“It’s different in there and it makes the place look good,” said Charles Cox, also of Medora Place.

Asiano Serrano, who was celebrating his eighth birthday Aug. 8, lives on Ford Avenue, right next to the farm. He said he likes either big carrots or little ones.

His brother, Luis Hernandez, noted that the farm provides a peaceful scene. “I think that’s something better to look forward to,” he said.

The boys’ mother, Yahaira Flores, said that before the farm went in, the space “was plain. And nobody played there.”

She’ll appreciate the farm’s green peppers and red peppers. She adds them to one of her favorite meals: Spanish rice and beans.

“The Lord has given us this earth,” he said. “What we DO with it is our choice. It can be good, or it can be bad. Our choice is: Do something good with what God has given us. We didn’t make it; God did.”

Harvested crops pile up in a wheelbarrow at the Brady Faith Farm. Farm Coordinator Jessi Lyons says cover crops grow at the edge of the field in order to increase the fertility and drainage of the soil. PHOTO COURTESY CHUCK WAINWRIGHT

Tomatoes are among the crops at the Brady Faith Farm. Major donor Charles Reller has provided seed money for the farm, but the farm team also is constantly looking for donations and matching grants in order to be economically viable. PHOTO COURTESY CHUCK WAINWRIGHT

Brady Faith Farm Manager Roy Durgin checks plants Aug. 2 at the Brady Faith Farm off Valley Drive in Syracuse. Durgin has experience growing crops in places including Australia, the Hudson Valley, and the Catskill Mountains. Durgin hopes to obtain a permit so that he can put up a fence to keep deer from raiding the farm. – SUN PHOTO | TOM MAGUIRE