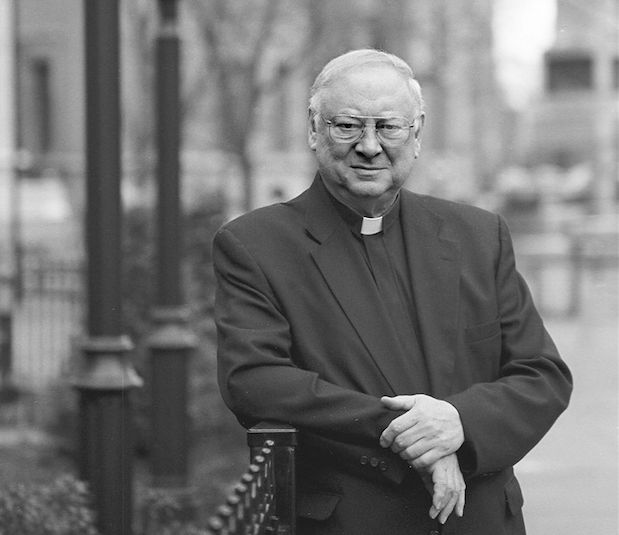 Auxiliary Bishop Thomas J. Costello stands outside the Cathedral of the Immaculate Conception in Syracuse in this file photo. (Sun photo | Matt Coulter)

In the mid-1970s, then-Father James T. O’Brien enjoyed firsthand the kindness and generosity of Syracuse’s future auxiliary bishop. Then-Msgr. Thomas J. Costello had completed 15 years as superintendent of Syracuse’s Catholic schools in 1975 and was appointed pastor of Syracuse’s Our Lady of Lourdes Church. Father O’Brien succeeded him as superintendent, and Msgr. Costello invited the young priest to live at the rectory in the Valley neighborhood. The younger priest lived at Lourdes about two and a half years.

“He provided a wonderful home, a wonderful house, a wonderful rectory,” said Msgr. O’ Brien, now pastor at Pope John XXIII Church, Liverpool. “I came to appreciate what a wonderful, pastoral man he was. He was a very personable, hospitable, caring person.”

When people sought counsel, food, or other help, Bishop Costello “would provide whatever was necessary,” often dipping into his own pocket. “He was generous and did not pass things off,” Msgr. O’Brien said.

More than 40 years later, Msgr. O’Brien recalls Bishop Costello shoveling snow from the sidewalks before Mass. “It always gave me an insight of what a genuine, regular, down-to-earth man he was,” he said of retired Auxiliary Bishop Costello, who died Feb. 15 at age 89.

Friends, colleagues, and Catholics who knew him or knew of him (including thousands of confirmands) remember Bishop Costello as an ebullient, generous priest who often introduced himself simply as “Tom Costello.” Over a nearly 65-year ministry, Bishop Costello influenced people through energetic homilies, prepared speeches and protests, personal interaction, quiet support, and private letters. He cared for people through gestures public and private, large and small.

Bishop Costello served as assistant pastor at Lourdes 1954-1959 and pastor 1975-1978. He called the years at Lourdes, his only parish appointment, “idyllic — absolutely the best five years of my priesthood.” Speaking after the closing Mass at Lourdes in October 2017, he described “great camaraderie in the rectory (and) great spirit among the people. … I finally got a chance to be the priest that I wanted to be, and the people were very receptive, very kind to me.”

He considered his tenure (1960-1975) with the diocesan school system another high point. When Bishop Walter Foery (1890-1978) appointed him in 1960, the diocese had 75 schools with 37,000 students. Within a few years, the diocesan school system grew to 96 schools with 42,000 students. Local growth paralleled national trends in Catholic education, with enrollment peaking in the early 1960s, according to the National Catholic Education Association.

“In the early ’60s, it was fun,” Bishop Costello told the Catholic Sun in 1975. “The wind was at our back. We were in the mainstream, part of a swelling trend. Enrollments were up; money wasn’t so hard to come by.”

That assessment was right on target, according to his successor. “He was able to see the beginnings of things, those little threads of development of economics, demographics, and the beginning changes in personnel for the schools,” Msgr. O’Brien said. “Because of his closeness with the work, he saw those trends developing.”

Bishop Costello’s clarity “helped me understand why things were the way they were and what he thought needed to be done as we moved on,” said Msgr. O’Brien, schools superintendent 1975-1982. “I have great gratitude to him for support and help and wisdom in assuming a job I was probably ill prepared for,” he said.

Bishop Costello was also “a bedrock of support” for religious educators, said Sister Kathleen Eiffe, CSJ, former diocesan director of the Office of Faith Formation. For years he spoke to catechists or led workshops at the annual Journey of Faith conference.

Bishop Costello put a lot of energy into Confirmation services, said Sister Eiffe, a member of the Sisters of St. Joseph province leadership team, in Latham. “He always wanted to make sure it wasn’t just pro forma,” she said. “When he asked the question, ‘Do you believe in God?’ he’d say, ‘I don’t hear you. Say it like you mean it.’ He revved them up, called them to be what they were called to be.”

Following the celebration, “he would stay afterward as long as any of our confirmands wanted to talk to him and take pictures,” she said. “He was a gracious man.”

Sister Eiffe appreciates Bishop Costello’s support for her and other women religious. “I don’t think there is a women’s religious community in the diocese that could not give an example of his support,” she said. “He was friends with many of us. There was a personal connection with many of the sisters.”

Danielle Cummings worked with Bishop Costello since 1996, first as diocesan director of communications, adding the job of diocesan chancellor in 2014. But her relationship goes back to her days at the former St. Anthony School, which she attended through eighth grade. She remembers Bishop Costello, then schools superintendent, visiting her second-grade class. “He was a huge figure,” she said. “I remember him walking in, truly engaged with all the kids.”

In those days, school officials tried to avoid confrontations between St. Anthony and Roosevelt School students. She remembers walking home along Midland Avenue, and a car driving slowly by. “It was then-Msgr. Costello making sure we got home safely,” she said.

For more than 40 years, Bishop Costello lived in the rectory of St. Anthony of Padua Church. “He had such strong connections with people on the South Side, the South Side ministers, the Office of Black Catholic Ministry,” she said. “He’s been that friend, that history, of the diocese. To the day he died, he did not forget a name or a place.”

Bishop Costello confirmed Cummings, presided at her 1997 wedding, gave her a silver baby cup from M. Lemp Jewelers for her first child, and presided at her mother’s 2015 funeral. “He was the only man other than my dad that I allow to call me Dani,” she said.

As colleagues, they “worked on hard issues and had hard conversations,” she said, including about clergy sex abuse. She recalls preparing a media response to an accusation of sexual abuse by a retired priest. Bishop Costello called the priest, and ended the conversation with, “I love you, man.” Cummings, mother to two young children, was furious.

“My insides were boiling,” she recalled. “I said, ‘This is a man we now know sexually abused a child.’” Bishop Costello replied: “I do. I love the sinner.” Cummings wasn’t having it. “You better put yourself in a momma’s shoes,” she said.

He said, ‘You’re right. I’m not a parent,’” Cummings recalled. “He educated me about the Church and priests and how they didn’t understand. He always thanked me for giving my insight on the parents’ perspective.”

Many remember lighter moments. Tina Dyer, executive secretary of the Diocesan Pastoral Council, met Bishop Costello in the late 1980s. “He always wanted us to accept other people unconditionally, to smile at them, say hello, stay calm, see the good in others,” she said.

For many years, she and Bishop Costello exchanged the same greeting: “How you be?” “We never passed each other by that we didn’t say that,” she said. “That will be missed. He always called me ‘Tiny.’ People in the chancery would laugh and laugh.”

After Bishop Costello retired in 2009, he took an office near Dyer’s and typically stopped by weekly. “We both had knee replacements and we compared notes,” she said. “He was just a common person who happened to have the title bishop.”

“He was smart. He was a strong leader in the sense that he would be able to say what he thought,” said Msgr. Fahey, who was director of Catholic Charities when Bishop Costello served as superintendent. “It wasn’t the domineering leadership, it was the servant leadership.

“He spread the good news wherever he went,” said Msgr. Fahey, who will give the homily Friday at Bishop Costello’s funeral Mass. “He touched an awful lot of people.”

When Bill Cuddy left active priesthood in 1995, Bishop Costello wrote to him. “It was a wonderfully warm letter,” Cuddy recalled. “He did those extra steps. People went to talk to him about their issues. He was available.”

He supported “everybody who had a justice cause,” said Cuddy, founder of Jail Ministry and a longtime activist. “He was a true Vatican II bishop. He was actively involved in all the issues of the day.”

Rabbi Daniel Jezer worked with Bishop Costello on interfaith and justice issues for many years. “Everyone looks up to him as one of the leaders, if not the leader of clergy in social concerns,” said Jezer, rabbi emeritus at Syracuse’s Congregation Beth Sholom-Chevra Shas. “His words and his insight carried a lot of weight.”

After the Syracuse Labor-Religion Coalition heard complaints about safety issues, low pay, and poor working conditions at the former Landis Plastics in the mid-1990s, Rabbi Jezer and Bishop Costello joined pickets there. They were outraged that four workers had lost fingers on the job. Bishop Costello called the company’s demerit system arbitrary and inhumane in a New York Times article.

When Bishop Costello, Rabbi Jezer, and another pastor went into the plant, hoping to talk to management, they were escorted out. “That was the best thing that could have happened,” Rabbi Jezer said. “When you escort out the bishop, that doesn’t sit well with the newspapers or the public.”

They went “to give moral support to the workers,” Rabbi Jezer said. “We were there as a presence. Shortly thereafter governmental agencies stepped in.”

Rabbi Jezer described Bishop Costello as “one of the few truly religious people I ever met.” His “entire life was integrated — his religion, his religious practices, his concern for humanity. His religion was not an end to itself. He was absolutely devoted to using religion to really help people.”

When Rabbi Jezer and Bishop Costello received the 2005 InterReligious Leadership Award from InterFaith Works, Bishop Costello gave a short speech warning against fundamentalism and fanaticism, particularly by religious traditions. “It was very powerful,” Rabbi Jezer said. “He was not a bombastic speaker. He was very well-reasoned and very well-spoken.”

Despite his public persona and busy schedule, Bishop Costello maintained connections with his home parish. Father Philip Hearn, pastor of St. Mary’s-St. Peter’s in Rome, recalls the bishop attending Sunday Mass with his mother in the early 1990s. “He sat with her in the congregation,” he said. “It was a little intimidating, but so typical of him.”

His annual Confirmation services were “always joyous,” Father Hearn said. “He always talked about growing up in Rome and being an altar server here. It was wonderful having him come home. He would stay in touch with many people and came to visit often.”

Bishop Costello “was an inspiration in many, many ways,” Father Hearn said. “He was such a special man to have been bishop for 40 years. The heavens will be a little better because he’s there.”

After funeral services Friday at Syracuse’s Cathedral of the Immaculate Conception, Bishop Costello’s body will be transported to St. Peter’s Cemetery, outside the city of Rome. He had long planned to be buried with his parents, Ethel Dupont Costello (1902-1994) and James Costello (1899-1970). The family gravestone reads “Msgr. Thomas J. Costello.”

During a visit a few years ago, the two discussed Bishop Costello’s final resting place. “Make sure you take care of the grass,” Bishop Costello said. “Oh, we’ll take good care of you,” Father Hearn told him.

Renée K. Gadoua, a freelance writer and editor, has covered Bishop Costello for more than 30 years. She previously worked as a Catholic Sun staffer and religion reporter for The Post-Standard/syracuse.com. Follow her on Twitter @ReneeKGadoua.

Correction: Due to an editing error, the original version of this story misstated the year in which diocesan Catholic schools enrollment dropped to about 23,000 students in 76 schools. It was in 1978, when Bishop Costello became auxiliary, not in 1975, when he left his post as diocesan superintendent. This story has been updated to reflect the correction.