During a March 16 plenary assembly with members of the Congregation for the Clergy, Pope Benedict XVI announced a Jubilee Year of the Priest beginning June 19, 2009. The pope will conclude the celebration during an international gathering of priests in St. Peter’s Square June 19, 2010. 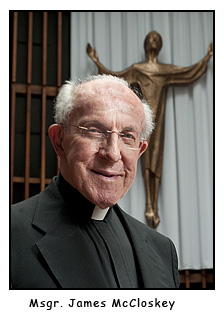 With the announcement of this Year of the Priest, the pope has declared St. John Vianney the patron of all the world’s priests on the occasion of the 150th anniversary of his death, describing him as a “true example of a priest at the service of the flock of Christ.”

St. John Vianney, a 19th-century French diocesan priest, was assigned to the rural and spiritually dying town of Ars in central France at a time following the French Revolution when it looked like the church might be destroyed. Through his example of personal holiness and attention to the sacraments, St. John Vianney was able to transform his parish. People from all over the world came to receive the sacrament of reconciliation from the Cure’ of Ars, as he became known.

The pope called for the special year of priests in an effort to foster the priests’ yearning for spiritual perfection.

Msgr. James McCloskey has served as a priest in the Syracuse Diocese for the last 63 years. He retired in 1995 and has been in residence at Immaculate Conception in Fayetteville ever since.

“I was surprised and deeply grateful for the warm welcome Immaculate Conception gave me,” he said. “They have maintained that spirit of deep and convincing response to the love that I try to give to the parish.”

Msgr. McCloskey is actively involved at Immaculate Conception Parish, serving as a greeter before and after Masses and counselor; he hears confessions, baptizes, anoints and visits parishioners who are hospitalized. “I still think I have a lot of community service hours that God is expecting me to work off for past offenses,” joked Msgr. McCloskey.

In addition, Msgr. McCloskey said he tries to make regular visits to Immaculate Conception School and the faith formation program. “It’s extremely important that I do that,” he said.

Born in Syracuse on April 11, 1921, Msgr. McCloskey attended St. Mary’s Cathedral Elementary School and graduated from Cathedral High School in 1939. After completing his undergraduate studies at Niagara University, he studied for the priesthood at both St. Bernard’s in Rochester, and the Theological College in Washington, D.C.

Msgr. McCloskey said that many factors determined his decision to enter the priesthood. “My main motive was to find complete fulfillment, which I thought only God could give,” he said. “The priests at the Cathedral were definite role models, especially Father James McPeak, Father Jeremiah Davern, Father Frank Walters, Father John Tierney and Father Edward Murray. Father Murray was a beautiful man — he was so genuine, quiet and low-key. But he was strong with a subtle wit.”

Msgr. McCloskey was also influenced by Father Martin Watley, associate pastor at the Cathedral and director of Propagation of the Faith. “I visited him often,” Msgr. McCloskey said. “He was a very strong but warm presence. He saw that I wasn’t at peace with myself and he wanted to know why. He said, ‘I think God’s calling you to the priesthood.’ I agreed with him. He brought out something that was prominently in my mind.”
Father Watley continued to guide Msgr. McCloskey throughout his priesthood.

Msgr. McCloskey also cited his older brother’s influence as one of the determining factors in his decision to pursue the priesthood. His brother attended seminary for a period of time. “He was definitely a role model to me,” said Msgr. McCloskey.

Ordained May 30, 1946, Msgr. McCloskey’s first assignment was as an associate chaplain at Fourth Lake at Camp Assisium. Afterwards, from 1946 to 1964, Msgr. McCloskey served as the parochial vicar at Our Lady of Pompei Church, St. Peter, St. Daniel and St. Therese, all in Syracuse. From 1957 to 1964, he helped on weekends at Holy Cross in DeWitt.

During the course of his career in the priesthood, Msgr. McCloskey has had a number of special assignments. They included serving as spiritual director for the Legion of Mary, promoter justitiae, evaluation-committee member, positions with continuing education and the Catholic Education Committee, Circle IFCA moderator, Confraternity of Christian Doctrine director, a role on the CCD executive committee and diocesan consultor.

Reflecting on his years of service as a parish priest, Msgr. McCloskey described the period as a continual learning process that at times involved periods of trial and error which eventually resulted in growth. “My priesthood has been generally very happy,” he said. “I’ve gotten away from the idea of fulfilling my dreams and to instead do what God is calling me to do. All I wanted was what God wanted.”

Msgr. McCloskey said that he assumed the pastorship of  Christ the King at the conclusion of the Second Vatican Council. “My assignment to the parish came at an ideal time,” he explained. “I was able to implement those ideals into that parish, particularly the much wider use of lay involvement in positions of responsibility. I’d made an effort not to micro-manage — I let them make the decisions.”

Then he was assigned to Holy Family for almost eight years. “I was very happy at Christ the King,” said Msgr. McCloskey, “But whenever a new assignment came up, I said, ‘That is what God wants and I will do it with all my my heart.’”

Initially, he was apprehensive about serving at Holy Family due to the large size of the parish. “It had a lot of built-in problems that I did my best to alleviate if I didn’t solve them,” he said. “I think the people were happy with me there. I did my best as a pastor.”

Looking back, Msgr. McCloskey said one memory surpassed all others. He remembered the exceptional support he received from the staff at St. Brigid/St. Joseph. “They made my work there a special joy,” said Msgr. McCloskey.

“Serving there had its special rewards and special problems,” he explained. “The young people were great as servers and they were very faithful. Also, the confirmation classes were very gratifying to work with. Parish life there was not a breeze, by any means. We struggled financially. There was a lot of vandalism and there were three murders involving the parishioners while I was there.”

Throughout his years as a priest, Msgr. McCloskey has been impressed the most by “the deep-down holiness of the many good families that I worked with and to see the sacrifices that they made.”

Msgr. McCloskey said that the most helpful quality a person needs to serve as a priest or religious is a firmness and a constancy of commitment. “It should be done from one’s faith with the motives of doing the will of God and serving God’s people as lovingly and as humbly as one can.”

Msgr. McCloskey said there are certain aspects of serving as a priest that he especially enjoyed. He found his involvement with people  and the preparation and celebration of liturgies to be the most fulfilling to him. “I find great joy in the relationships that have held up, particularly from St. Peter’s,” he said. “I still hear from my loyal friends and regularly meet with the young people I worked with. I’ve never regretted being a priest.”