A concert featuring some of the area’s most talented singers and musicians will be held at 7:30 p.m. on Friday, March 12 at Immaculate Conception Church in Fayetteville to benefit the Amaus clinic.

Tickets are $10 and will be available at the door. 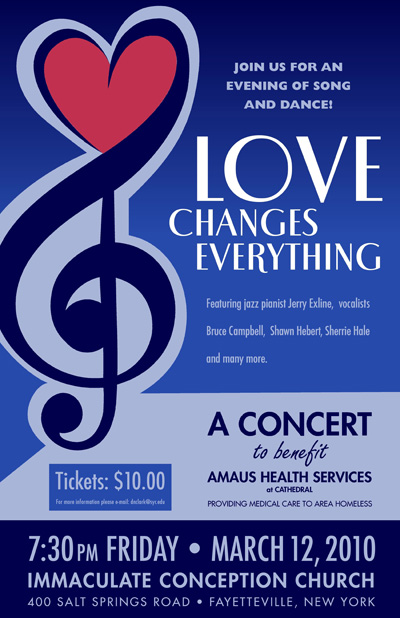 The evening will feature 16 solo performances, two ensemble pieces, two choirs and two pieces where all of the performers will sing together. The music performed will include jazz standards, classical music and more contemporary pieces.

After the intermission, salsa and flamenco dances will be performed as well.

Sherrie LaFrance Hale, the cantor for Immaculate Conception, is producing the event, and she said she was inspired to help when she heard fellow parishioner Lynn-Beth Satterly speak of the clinic she started to help the city’s poor.

“It’s such a worthwhile cause, and especially now in this economy when there are so many people who are needing these services,” Hale said.

Amaus clinic provides free interim primary medical care for everyone from the underemployed and uninsured to the homeless.

It was started in the fall of 2006 when Msgr. Neil Quartier, rector of the Cathedral of the Immaculate Conception, approached Satterly and her husband Clyde, who are both doctors, about how the Cathedral might help meet the needs to the medically underserved in the community. By April of 2007, Satterly had the clinic up and running.

“So many people are afraid of the larger institutes,” Msgr. Quartier said, “even hospitals.” So Amaus provides much of the same care and attention that patients would receive at larger institutions, but in a much less daunting environment. The clinic is found through a door tucked next to the Cathedral Emergency Services Center.

“Health care in this country is in such a state of crisis, and the church has always reached out to deal with issues not being dealt with by the government. We try to fill in where the government or other agencies aren’t responding and we can,” Msgr. Quartier said. “We don’t need to build hospitals any more. We need to really do groundwork.”

Satterly agreed. “The church is very much poised to succeed at the grassroots level,“ she said.

The clinic is entirely funded by the Cathedral. Doctors, nurses, receptionists, and medical students volunteer their time and the clinic receives donations of medical supplies from pharmaceutical companies and members of the community. An open door between the offices of the clinic and those of the Emergency Services means easier access to resources patients might need beyond medical care, like food or warm clothes.

The staff tries to make the experience of those who come to Amaus as similar as possible to a visit at any other doctor’s office. There is a waiting room where people can have some tea or water, they are called into private examination rooms and their medical history is tracked on charts stored in the clinic.

And now, as more clinics across the country are moving toward computerized record-keeping, the staff at Amaus is determined to provide the same quality of care.

But this comes at a price.

“What we’re seeking to do with our portion of the benefit concert proceeds is to start up electronic medical record system because that’s becoming the standard of care across the country,” she said, “and we really do try to achieve the same standard of care here.”

To get the system started up will require $15,000, and thousands more will be required in monthly maintenance fees. But Satterly said she’s certain the clinic can find a way to maintain the system once it’s implemented. “Everything I do I know I can sustain,“ she said.

“Patients who come to us here have enough struggles in their lives,” Satterly said, “and we try to be something that they can rely on.”

But even with the need for funds to help the clinic, Msgr. Quaetier has asked that part of the profits from the benefit concert go to help those in need in Haiti as well.

“It’s good for the students to be able to see that there’s bigger problems even than the ones we have here,” Msgr. Quartier said.