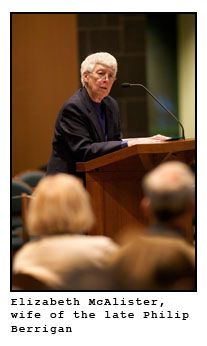 The latest installment of the Daniel Berrigan Lecture Series at the Panasci Chapel on the Le Moyne College campus featured the powerful presentation of Elizabeth McAlister on Wednesday, April 1.

McAlister and her husband, the late Philip Berrigan, founded the Jonah House Community in Baltimore, Md., in 1973. McAlister, a former sister in the Religious of the Sacred Heart of Mary order, lectures on nonviolent resistance, community, prayer and peacemaking throughout the U.S. and Canada and has written articles on those subjects for numerous publications including the National Catholic Reporter, Sojourners Magazine, Marriage and Family Living and Maryknoll. She also co-authored with Philip Berrigan The Time’s Discipline, a book on the Jonah House experience. She has been arrested numerous times for nonviolent resistance to war-making and spent two years in prison in the mid-1980s for such an action at the Griffiss Air Base in Rome, N.Y.

McAlister said she was honored to have the opportunity to contribute to the legacy named in honor of her brother-in-law — Jesuit Father Daniel Berrigan. “It’s a treat. It’s a gift. It’s really a privilege to be part of this story that Dan has helped to start and weave and continue to inspire going so far back,” she said.

McAlister’s lecture was entitled “Contemplation and Violence in the Post-9/11 World.” She dealt specifically with the U.S.’s reaction to the terror of 9/11 and offered Jesus’ example as an alternative to violent retaliation.

Le Moyne alum Mike Pasquale offered an introduction. In addition to welcoming McAlister, he extended greetings to noted local activists Jerry and Carol Berrigan as well as their son Philip Berrigan. Pasquale also detailed a brief history of the Berrigan Lecture series, which was established in 1999.

“Dan [Berrigan] has done the simple and the profound and that’s what we are called to do,” he said.
McAlister opened with a quote from “the madman [Friedrich] Nietzsche, who said, ‘God is dead and we have killed him.’” She countered by saying that “perhaps religion has died, not God.”

Using phrases evoking ritualistic religion, McAlister illustrated the events of 9/11, as well as the response among most Americans. McAlister repeatedly described Ground Zero as a sacrificial ground and described President George Bush as acting as high priest in orchestrating the U.S. response to the attacks. She emphasized contemplation, which she described as interaction with God, as an alternative to violence.

She decried the terrorists’ act of piloting airplanes into the World Trade Center but also noted that the U.S. reaction was similarly savage.

“That day we were all invited to participate in something that I and others would label satanic,” she said. She underscored the importance of the location, New York City, as a center for national media. “We were sucked in. We were fascinated,” she said, referring to the violent retaliation that followed the incidents of 9/11. She noted that the response to retaliate against the terroristic act was bellicose. “Are you with us or against us? And that was followed by suppression,” she said, adding that the atmosphere in the U.S. could be described as one of “fear and disorientation.” The alternative to the war on terror, she said, is to consider and contemplate on the example of Christ. McAlister explained that the Gospel liberated humans from the illusions proffered by Satan. “We no longer have to believe [the satanic lie],” she said. Without contemplation, humans are swept up in the cycle of retaliation for its own sake. “We will likely get caught up in the world of reciprocal violence and that is not what Jesus wants,” she said.