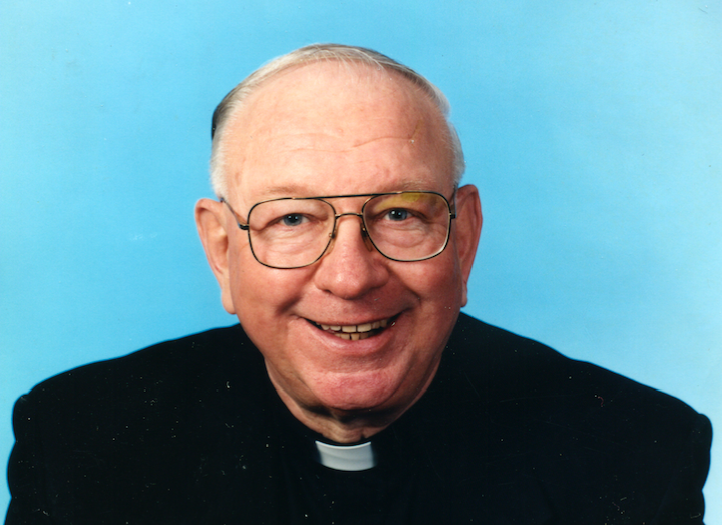 Father John E. Fetcho was remembered as “a sermon walking” July 1 as family, friends, and fellow clergy gathered at Our Lady of Peace Church in Syracuse to celebrate his Mass of Christian Burial.

A son of St. Brigid’s in Syracuse, Father Fetcho graduated from St. Patrick’s High School in Syracuse in 1955 — though for a moment it looked like that might not happen.

“John was actually expelled from St. Pat’s in his senior year,” his family wrote in the funeral program. “He skipped a Career Day event at the Cathedral. He and a friend went to play mini golf. Our parents were summoned to the office of the principal, Msgr. Driscoll. John explained to them he felt he did not need to attend the event because he already knew his career path was that of being a priest. Upon hearing that, Msgr. Driscoll caved in and re-instated John.”

He attended St. Andrew’s and St. Bernard’s seminaries in Rochester, and would later study at Le Moyne College, The Catholic University of America, and Notre Dame University.

Father Fetcho was ordained for the diocese on May 16, 1964. His priestly ministry included service as parochial vicar at St. Patrick’s in Binghamton and at St. Margaret’s in Mattydale; director of the Endicott Faith Center for students at Union-Endicott High School; and pastor of St. Ambrose in Endicott, St. Vincent de Paul in Vestal, and Our Lady of Peace in Syracuse. He also served on the diocesan Vocation Committee and Priest Personnel Committee and as chaplain to the Nocturnal Adoration Society in Binghamton, Johnson City, and Endicott.

Raised in a home by a father strong in faith and a dedicated and devoted mother, “John was bright, humble, extremely athletic, kind, faithful, faith-filled,” he said.

At social events at the parish, Father Fetcho could often be found in the middle of a table, talking and laughing, Father Carmola said. He recalled a staff member once saying he “never saw a pastor who seemed to be so happy to be with his people.”

Father Fetcho recently gave Father Carmola a book of prayers. He must have invited people to share their favorite prayers, Father Carmola said, which he then collected and bound and gave out at Syracuse Home.

Father Carmola closed with a recollection from his and Father Fetcho’s time in seminary. A classmate of theirs was stricken with cancer. “His mother was a nurse and as he was dying she sat next to his bed, and saw his blood pressure begin to plummet, so she began to cry,” Father Carmola said. “He mustered up enough energy to say to her, ‘Mom, please don’t cry — it’s too beautiful here.’ So John, pray for us in that place that’s so beautiful.”

A second letter from Bishop O’Keefe provided an especially fitting sentiment. At the time of writing, Father Fetcho was returning from his sabbatical at Notre Dame and marking a priestly anniversary. “Onward to victory,” Bishop O’Keefe wrote, referencing the fight song of Father Fetcho’s beloved Notre Dame.

Father Fetcho is survived by his sisters Sister Mary Ann Fetcho, CSJ, of Liverpool, and Theresa (Gerald) McCarthy of Syracuse; brothers Thomas (Cindy) of Camillus and Leonard (Paula) of San Diego, Calif.; aunts Margie and Letizia; and several nieces, nephews, and cousins. Contributions in his memory may be made to St. Marianne Cope Parish, 105 Stanton Ave., Syracuse, N.Y. 13209, or to the Sisters of St. Joseph Carondelet Retirement Fund, 385 Watervliet Shaker Road, Latham, N.Y. 12110.