French churches get increased security before feast of Assumption 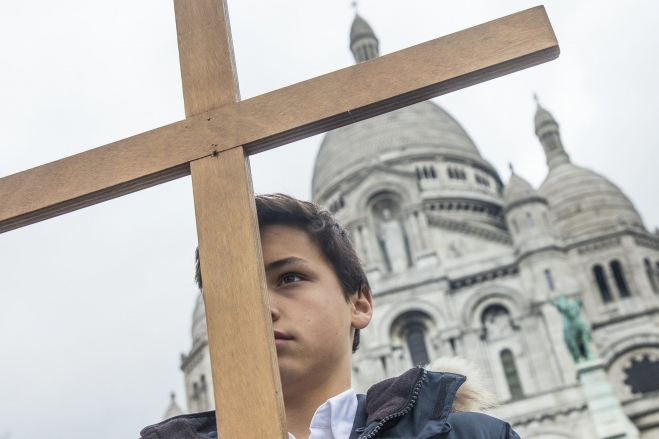 PARIS (CNS) — Catholic churches in France have been placed under police protection and urged to take extra security measures against possible Islamist attacks before the Aug. 15 feast of the Assumption.

“Every religious gathering, whatever its magnitude … is vulnerable today to acts of malevolence, which may extend to terrorism,” the country’s Interior Ministry and bishops’ conference said in a joint message to Catholic dioceses. The message was published Aug. 11 in France’s Catholic daily, La Croix.

“Observing simple rules may allow you, without excessive distrust, to ensure your security and that of your community, while preserving the calm [and] sharing openness to others, which is needed for maintaining your faith and religious practices,” the message said.

It urged Catholics to look out for unusual actions or demeanors, such as people wearing coats in hot weather. It also advised people not to leave bags on seats when receiving Communion at Mass and to keep watch on visitors who appeared “very nervous” or showed “an unusual interest in the event or the building.”

Security was increased at France’s 45,000 Catholic churches, as well as on Jewish, Muslim and Protestant places of worship, after January attacks on the offices of a Paris satirical weekly, Charlie Hebdo, and a kosher supermarket left 17 dead, including three Islamist assailants.

In April, French Prime Minister Manuel Valls placed 178 Catholic churches, including the capital’s Notre Dame cathedral and Sacre Coeur basilica, under permanent police guard after an ethnic Algerian and two others were arrested for planning an armed attack on churches at nearby Villejuif.

However, since then, several Catholic sites — including a church in Tourcoing and a cemetery at Labry — have since been attacked or desecrated.

The communications director of the Marian sanctuary of Lourdes, David Torchala, told the Le Figaro daily Aug. 12 the shrine, which attracts 6 million pilgrims annually, was “open 24 hours daily, seven days a week with numerous entrances,” and staffers could not “search everyone with a strange appearance.”

In a website statement, the bishops’ conference said 150,000 were expected to join the traditional Assumption pilgrimage and Mass at Notre Dame cathedral, which claimed 14.3 million visitors in 2014.

It added that church bells would be rung Aug. 15 in Paris and other French cities in solidarity with persecuted Christians in the Middle East.