Fulbright grant takes Dolphin from the Heights to Vietnam 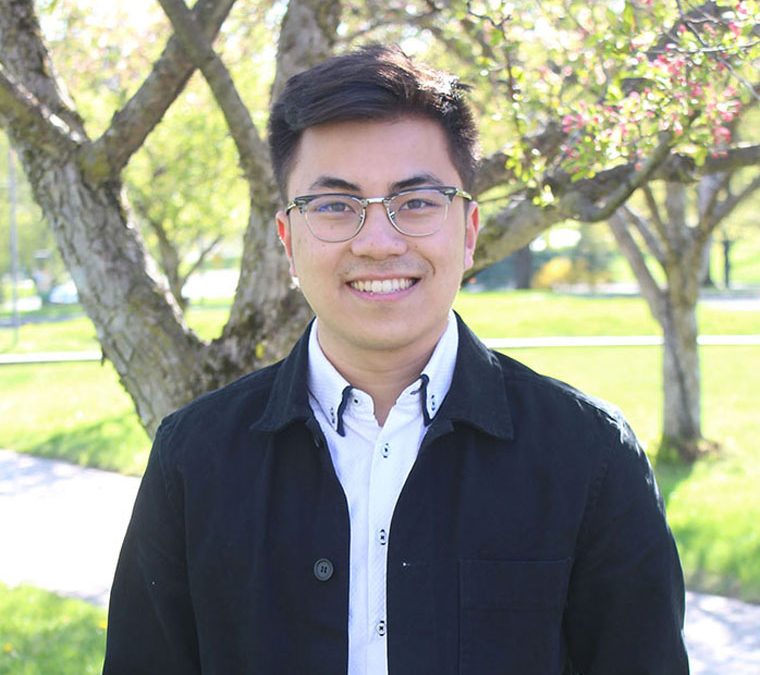 Bryan L. Tran is a little — but just a little — sheepish about what first drew him to Le Moyne College. “I loved the mascot,” he said. “The dolphin is my favorite animal.” His affection for the mammal associated with friendship and knowledge quickly expanded to embrace the college community’s ethos and traditions.

“When I first stepped foot on campus, I really felt a sense of community,” said Tran, who graduated May 28 with Le Moyne’s Class of 2021. “It really felt like home here.”

Tran, a French major from Endicott, was awarded a Fulbright to teach language in Vietnam, his parents’ native country. He wrapped up his Le Moyne education as the college, the youngest of 27 U.S. Jesuit colleges and universities, marked its 75th anniversary.

“I’m very excited,” he said a week ahead of graduation.

He will spend a year teaching language through a Fulbright U.S. Student Program English Teaching Assistant Grant to Vietnam. The Fulbright Program is an international educational exchange program sponsored by the U.S. government.

“I think it’s going to be a very wholesome experience,” Tran said. “It’s going to give me opportunities as an educator. It will shape my teaching overall.”

Tran is among at least 20 Le Moyne graduates to receive Fulbright awards, according to Joe Della Posta, speaking for the college.

Tran’s parents grew up in Hue, Vietnam, and immigrated to the United States in the early 1990s. “This brings me full circle,” he said. “Being born here and going there will help me understand why my parents are how they are.”

He learned Vietnamese before learning English. A French major with an adolescent education concentration and a philosophy minor, Tran also speaks Spanish.

He first visited Vietnam in summer 2018. Le Moyne-related travel cemented Tran’s interest in traveling and teaching abroad. In January 2019, he went to El Salvador on a Le Moyne service immersion trip. He spent fall 2019 living with a host family in Grenoble, France, near the French Alps.

The trip to El Salvador “was a very emotional time,” Tran said. “I saw what it was like for these people to live in difficult circumstances. Listening to the teachers’ narratives about social justice opened my perspective as a future teacher.”

He was humbled to witness people without “the things we in America are lucky to have. … In the future I will have a diversity of learners. I want to be very aware of the people I encounter and accommodate their needs and inspire them to enjoy learning.”

He chose France to immerse himself in language and culture while living in a student-centered city. “It’s easy to navigate and travel or go to another country,” he said. “Living with my host family was very authentic. They took me to markets. I explored the city. All these great things came together.”

He prepared his Fulbright application with Deborah Cromley, a Le Moyne language professor who was awarded a Fulbright Student Grant to study in Germany. “We spent days, hours, and hours again together,” he said. “She was my guiding light. Everything she taught me has made me a better writer and more resilient.”

“I wanted to learn from a wide array of perspectives,” he said. “I wanted a place where people would know me by name. I really did get that.”

His advice to incoming students: “Enjoy your time. Embrace all the opportunities that come to you.”

He has “too many Le Moyne memories” to list. “I dedicated so much time and effort and found so many opportunities to get involved,” he said. “I made so many friends. I have professors I know I’ll stay in touch with.”

Leaving Le Moyne “is going to be very bittersweet,” Tran said. He won’t have much time to dwell on it, though. Fulbright orientation will be online this summer, and in mid-August he heads to Vietnam.

Renée K. Gadoua, a frequent contributor to the Sun, is a Le Moyne College graduate. Follow her on Twitter @ReneeKGadoua.