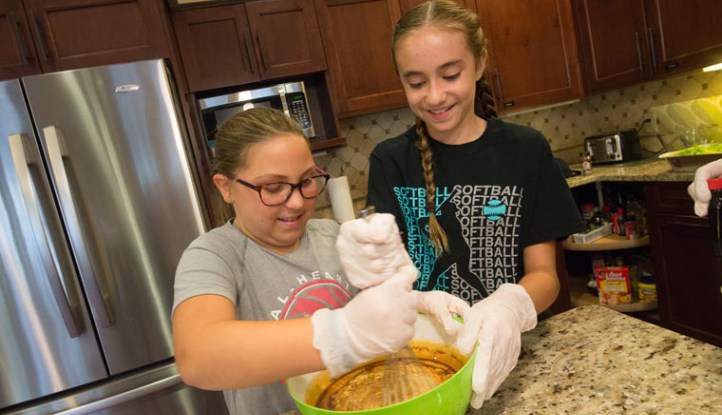 Ten rising fifth- and sixth-graders from Holy Cross School in DeWitt have banded together as the Caring Crusaders, dedicated to serving those in need in their community. Half of these loving warriors rallied at Syracuse’s Ronald McDonald House Aug. 25, armed with ingredients to make a homemade meal for the families in residence.

The Caring Crusaders club began with Catherine Boulé, a Holy Cross mom whose five children have all attended the school. Her eldest daughter, Julia, graduated from Christian Brothers Academy in the spring and Boulé said she saw Julia thrive and find herself through the service projects she participated in there. “I saw her grow as a person immensely,” Boulé said.

It got her thinking that younger students, like her daughter Allison, a rising sixth-grader, should also have a way to serve and to reach out to their communities by donating their time and effort rather than simply goods or money.

Last spring, working with Holy Cross Principal Martha O’Leary, Boulé offered the opportunity to serve to rising fifth- and sixth-graders; the first ten students to sign up for the club became the first class of Caring Crusaders. They had a planning meeting in June, sharing brainstorms on places and people they could help. Boulé made a few calls and lined up Ronald McDonald House, which provides a home away from home for sick children and their families who are in Syracuse for medical care, as the Crusaders’ first foray. Half of the Crusaders cooked a meal at the House in July; the second half of the troops landed there Aug. 25.

On the menu that evening: Caesar salad, chicken riggies, garlic Tuscan bread, and layered banana pudding. The Crusaders, assisted by several of their mothers, divvied up the tasks and dove in, chopping veggies, slicing bananas, and boiling pasta. Many of the Crusaders are alums of the Holy Cross cooking club and some of the recipes for the meals were drawn from there, Boulé explained. Soon excited chatter and delicious scents filled the kitchen.

Rising fifth-grader Katie Pledger, 10, worked away at the dessert preparations with a few friends. Why did she want to join the Crusaders? “I just thought it would be fun and nice to help out other people,” she said.

In addition to cooking the ingredients, the Crusaders also helped to raise the money to buy them. The group launched a summer bottle drive, explained Marianne Fricke, mom to Crusader Ben and coordinator of the drive. Word of mouth, a school-wide email, and bulletin blurbs led to a whopping 3,600 bottles and cans collected, translating to $183 for the group, Fricke said. Ben and a few others also went collecting door-to-door, bringing in another $150, she said.

Ben summed up the motivation for his hard bottle-collecting and cooking work simply: “Because it helps other people,” the rising fifth-grader, 10, said. “It’s a good thing to do.”

Ronald McDonald House Volunteer Manager Emily Whalen agrees. “I think it’s nice for everyone involved,” she said of the group’s efforts. Among other duties, Whalen plans the meal offerings for families staying at the 25-room house, which includes scheduling monthly deliveries by local restaurants and on-site cooking by other volunteer groups like the Crusaders. The home-cooked meals bring some cheer to the families at the House, she noted. “The Caring Crusaders have been a huge help,” she said.

The Caring Crusaders will take on their next project this month, visiting Matthew 25 Farm, which grows and distributes produce for those in need in Central New York. Also on the horizon: raking leaves and shoveling snow for older neighbors and a cookie delivery to local firehouses at Christmas, among other initiatives.

If you’d like to help support the Caring Crusaders’ work, you can contribute to their next bottle and can drive, to be held Nov. 10 from 12 to 3 p.m. at Holy Cross School, 4200 East Genesee St., DeWitt. Contact Marianne Fricke at mariannefpt@gmail.com with any questions.