IC parishioner with ‘the secret of life’ turns 103 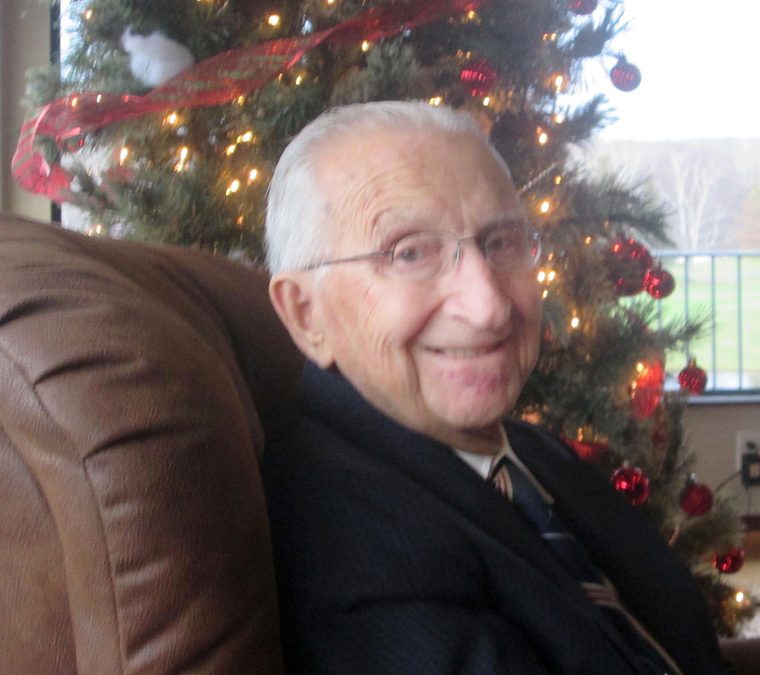 “You’re not old till you hit 90,” Luke Pesane said in 2017. “You’re not even entitled to worry about it. When you hit 90, even then you’re not entitled, because you think you’ve got a lot of years left.”

Father Thomas Ryan can spot the superlative ones.

For his 103rd birthday Dec. 2, Luke Pesane found a “beautiful card” on his door from the staff at Immaculate Conception Church in Fayetteville. “You’re the greatest, Luke!” the pastor, Father Ryan, wrote on the card.

Because of the coronavirus pandemic, visitors are not allowed to mingle with Luke at the Nottingham senior center in Jamesville.

“You really can’t get him much ’cause he doesn’t really need anything,” said his son, Jim, who expects his father to receive a vaccine against the virus soon.

The gift of in-person contact would be the best Christmas present, said his daughter Patricia Burgess of Cocoa Beach, Fla. “He’s such a social guy,” she said.

“That’s what he would like, yeah,” Jim said, “he wants to be around people.” 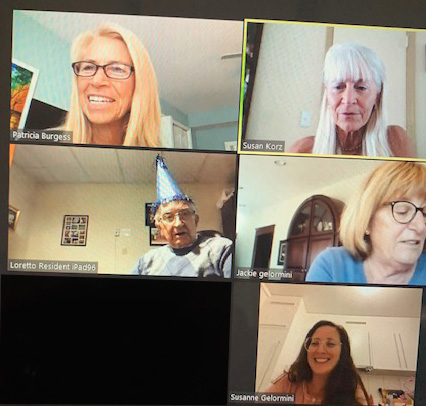 Instead, his adoring family members must wave to him outside his first-floor window. On his birthday, 15 to 20 family members and relatives greeted him on a Zoom call from all around the country and even from Switzerland.

Luke’s wife of 75 years, Ruth, died at the age of 97 on Dec. 8, 2017. In June of that year, they had been celebrated as the longest-married couple who had signed up for the Diocese of Syracuse’s World Marriage Day Mass.

“Luke is just an amazing man!” Father Ryan said in an email. “He has a deep faith, a sharp mind, a kind demeanor, and a terrific sense of humor. Luke continues to read daily and keeps up with current issues. He is well-known at the Nottingham and the staff love him. Whenever I mention that he has the secret of life, he comments that ‘God has been good’ to him.

“During our very successful Capital Campaign which began in 2015, Luke was a volunteer — at 98 years old! — assisting us by going to the homes of parishioners to explain the purpose of the Campaign and give information regarding pledges. I doubt many parishes have volunteers who are 98 years old and can make such presentations!

“Immaculate Conception is very proud that Luke and his late wife, Ruth, have been active members of our faith community. Luke’s positive attitude is contagious as he shares himself in such a selfless and caring way.”

Ruth was from Solvay; Luke, from the North Side of Syracuse. He first saw Ruth at a dance hall in the mid-1930s in Syracuse. They married on April 25, 1942, and Luke served for three years in the Fourth Air Force during World War II.

Under the GI Bill, he graduated from Syracuse University in 1949 with a bachelor of science degree in sales management and psychology. As he had done at North High School, he worked a job while attending college. For six years in his ninth decade, Luke mentored students at SU’s Martin J. Whitman School of Management on how to interview for jobs. Last year, an online profile by the Whitman School noted that Luke was the first in his family to attend college.

During a 30-year career in sales, Luke became a regional manager for Moore Business Forms; then for 10 years he ran his own business conducting executive searches. “You’re not old till you hit 90,” he told the Catholic Sun in 2017. 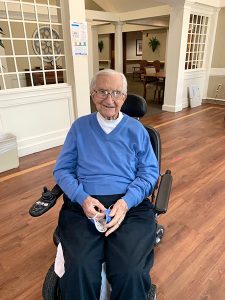 Luke Pesane wears his customary smile in September 2020 while being visited by his daughter Susan Korzeniewski. In 2017, Luke told the Sun: “You’re not old till you hit 90. You’re not even entitled to worry about it. When you hit 90, even then you’re not entitled, because you still think you’ve got a lot of years left.” (Photo courtesy Susan Korzeniewski)

Last week, Luke’s daughter Susan Korzeniewski and her husband, Tom, of Fort Lauderdale, Fla., drove up and planned to wave at Luke through his window while they talked on cell phones. Susan planned to get him another helpful device for Christmas.

Luke hasn’t been able to get to the eye doctor or the dentist, but Susan said, “He’s doing pretty well for surviving this pandemic. That’s for sure. We’re very proud of him that he’s sticking with it, it’s been really tough on everybody. … He’s never rested and slept so much because he’s so bored. He changed his whole room around, went through all his files in the summertime.”

At Luke’s well-attended 100th birthday party in 2017 at the Cavalry Club in Manlius, Susan had said: “He’s such an amazing guy — teaches me something every time I’m with him.”

Asked what he has taught her since then, she said, “I guess just to appreciate the people around you — what you have.”

He inspires her to keep a “positive attitude, that’s for sure. Staying positive is what keeps everybody going.”

“My granddaughter’s been over there a couple of times and just gave him a birthday hat and bought him a cake and dropped it off,” said Jim, of Brewerton. He added that Luke is “doing the best he can.”

Magnetic, with a mission

Luke’s “mission is to help people,” Patricia said. She cited his interest in the family committee at the Nottingham “to help the residents that can’t really speak for themselves.”

“We get him everything he needs when he needs it,” Patricia said. For example, the family has ordered new glasses for him and they plan to make it easier for him to use a phone.