In new location, Samaritan Center will feed body and soul 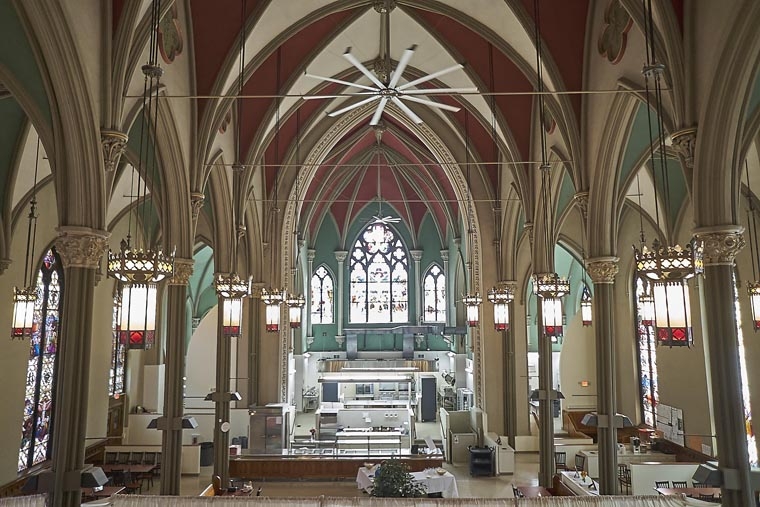 By Katherine Long, Editor
Beneath a soaring, vaulted ceiling and the eyes of saints in glowing stained glass, volunteers and staff of Syracuse’s Samaritan Center chopped carrots and hulled strawberries in their new home April 20.

Later that afternoon, guests would arrive for a special meal, the first of many to be served in the organization’s new location: the former St. John the Evangelist Catholic Church.

“I hope the guests will love it,” said Brenda Mims, assistant operations manager. “It’s for them.”

The Samaritan Center began serving free, bagged lunches to the hungry and those in need in 1981, operating out of the basement of St. Paul’s Episcopal Cathedral on Montgomery Street in downtown Syracuse. Over the next 30 years, the nonprofit organization and its family of guests grew. Today the Samaritan Center, with a staff of seven and a volunteer corps of 800 each month, provides free, homemade breakfasts to some 140 guests each weekday and dinners to 170 every afternoon; a staff member also provides case management services. Guests range from babies to octogenarians, people who are homeless to families facing a rough patch after a layoff. All are welcome and no questions are asked.

Increasing need along with space constraints in the basement led the Samaritan Center to begin looking for a new location about three and a half years ago. It found St. John’s, just blocks away at North State and East Willow Streets, available in the fall of 2013.

“The goal was to keep the warmth of what was here [the St. John’s building] and add a new chapter,” said Mary Beth Frey, Samaritan Center executive director. The organization aimed to “move operations in in a way that still kept the heart and soul of this place.”

On April 16, the Samaritan Center opened the doors of its new home to the public for a dedication ceremony. Stepping into what was once the nave of the diocese’s first cathedral, dozens of guests marveled at the transformation of the space.

Cozy tables have replaced the pews, but those original seats haven’t gone far — several of them ring the main dining room and serve as bench seating for the tables. Wood from the front row of pews now encases the serving line and “people will eat where the Communion rail was,” Frey said. A shiny, spacious kitchen stands elevated in the former apse; John the Baptist in stained glass appropriately soars above the wash area. Freshly-painted walls highlight the gem-colored windows; original lighting fixtures hang above the dining room.

“I think it will be so wonderful for everyone’s heart and everyone’s soul to be in a space that’s so beautiful and so dignified and so respectful,” she added.

Cathedral Rector Msgr. Neal Quartier, who served at St. John’s for 11 years, offered words of praise and encouragement at the dedication ceremony. Asked what Pope Francis might make of the former church’s new life, he said, “I think that he would be thrilled that the Gospel message is being lived out and Eucharist continues to happen in this building.”

“Eucharist is all about being fed and nourished. We did it spiritually [at St. John’s], now we’ll do it both spiritually and physically, feeding the neediest,” he said.

And as the chopping and roasting commenced April 20, Frey was looking forward to just that.

“I can’t wait until the guests get here and get to see it,” she said. “They’ve seen it at different stages of construction, but to be able to come in and make it their own — that is what’s exciting to me.”