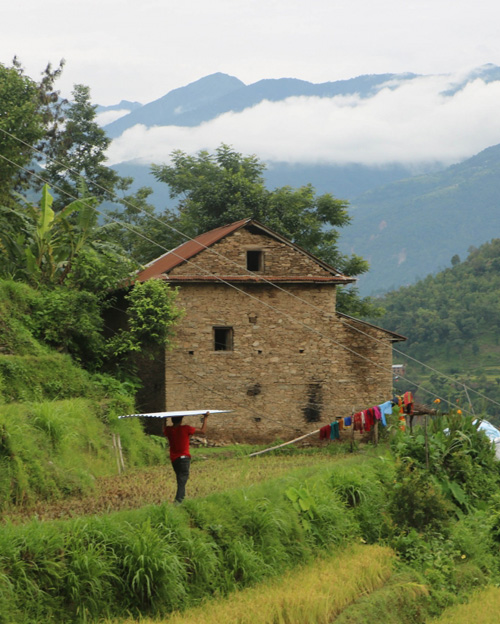 KATHMANDU, Nepal (CNS) — Despite mobilizing financial support and procuring relief material to reach out to remote areas hit by April’s earthquake, Catholic charities — like others — are facing problems caused by monsoon rains.

“Our plan was to complete the first phase of relief work by the end of June. Now it has been extended to August’s end,” Father Pius Perumana, Caritas Nepal director, told Catholic News Service July 16.

“Roads to several remote areas have been damaged or washed out in the rain,” said Father Perumana, who is coordinating the Catholic relief work supported by Caritas agencies worldwide.

He said distribution schedules have to be changed often due to rain and road conditions in the target areas.

Four bus passengers, including the driver, died and eight others were injured July 9 when a large boulder crushed a moving bus on the Pasang Lhamu Highway. Three days later, huge rocks from landslides could be seen blocking roads in several places outside Kathmandu.

“Traveling here in monsoon season is not easy,” quipped Jesuit Father Cap Miller, as the driver negotiated a slushy path along a road blocked by huge rocks from landslides.

Some relief workers traveled by bike up mountain paths rendered impassable by torrential rains. Villagers could be seen carrying tin sheets on their heads along mountain slopes to set up temporary shelters.

Nana Anto-Awuakye of the British Catholic agency CAFOD had finished a visit to a remote mountain village where more than 3,000 people died in the earthquake. On their way back, there was a heavy downpour. The pathway was washed out and the Caritas staffers accompanying her had to toil nearly an hour to repair the road so that they could drive down.

“The situation is very challenging,” Anto-Awuakye told CNS from the Caritas Nepal office.

“The terrain is arduous for providing critical relief given the extreme isolation and elevation of these villages. Many are accessible only on foot or by helicopter, or else require travel on steep, dirt roads which quickly turn to mud or become impassable with rains,” said Brennan, who recently returned the U.S. from Nepal.

To get supplies to remote areas, CRS is using helicopters provided by the World Food Program, but “because of weight restrictions on the helicopters, transportation of these critical supplies requires multiple trips per day. These trips are entirely dependent on good weather,” Brennan added.

“When we arrive in these remote locations, especially those inaccessible by any road, we are met with tremendous hospitality and gratitude. … Our staff are often received with a ceremony and blessing by the village leaders,” Brennan said.

Experienced CRS and Caritas staffers from India, Indonesia, the Philippines and Bangladesh — countries regularly affected by natural disasters and often the recipients of emergency support from the global community — have been coordinating the relief work alongside Nepali teams, Brennan said.