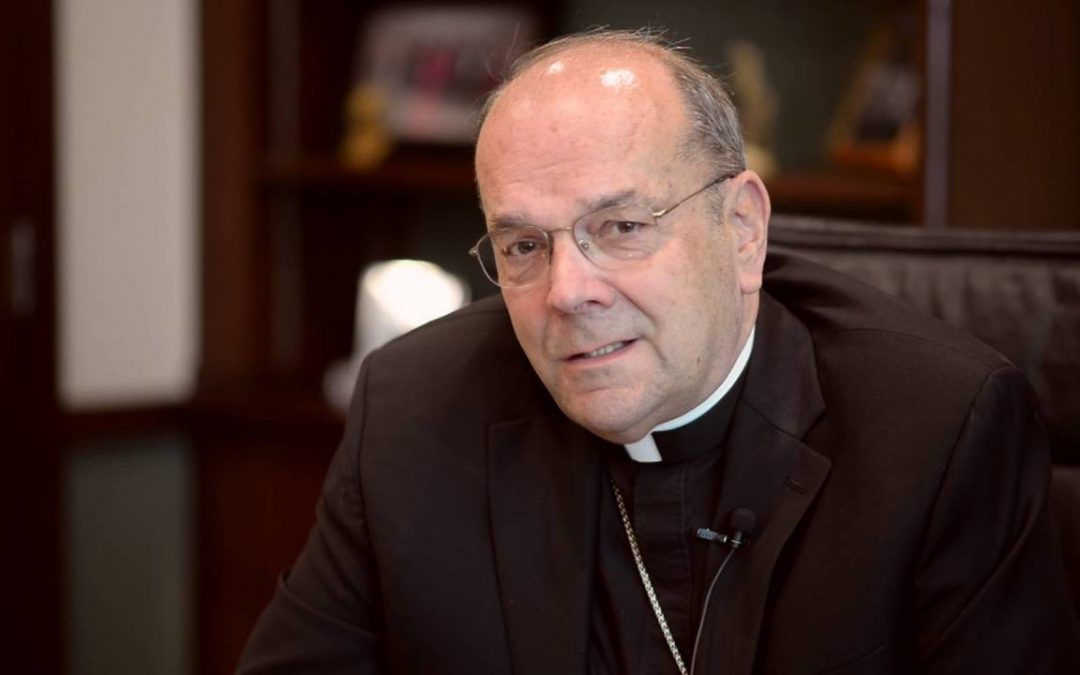 The conductor’s DVD resounded with expressions like “Jawohl!” and “Bravo!”

Sister Laura Bufano, CSJ, might prefer “Hallelujah!,” but she agrees that encouragement is important in the search for new leaders in parishes without a resident priest.

Sister Laura, director of the diocesan Office of Pastoral Leadership, showed the DVD Leadership: An Art of Possibility at the May 6 meeting of the Diocesan Pastoral Council at Bishop Grimes Junior-Senior High School.

Speaking to the representatives from parishes around the diocese, Sister Laura noted the need to recognize lay leadership and shepherd it into positions of authority.

Recognizing talent is one of the main topics in Boston Philharmonic Orchestra Conductor Benjamin Zander’s motivational DVD. Zander implores a young singer to show the fire of the Austrian composer Schubert, and he exhorts a young cellist to make people want to dance.

If their eyes shine, they’re ready to be a leader. That’s the point of the DVD.

Speaking after Sister Laura were more  people with shining eyes: three non-priests who have key roles in parishes.

First to speak was Pat Houghton, the parish manager and music and liturgical director at St. Theresa of the Infant Jesus in New Berlin.

Her community is small and isolated, the church building is old, and the parish needs more space, she said. But she told herself, “Well, there are possibilities.” It’s working out: There is Mass every weekend, along with the day-to-day things including baptisms, marriages, confirmations, adult education and instruction for K-12, a parish council, altar and rosary society, and liturgy.

Parishioners participate in the ChristLife evangelization series, and they consistently say a decade of the rosary for vocations to the priesthood, she said.  Parishioners make nursing-home visits and help the community food pantry, “keeping the Catholic presence there.” And she noted that the parish is on a sound financial basis.

Just as in Conductor Zander’s DVD, Houghton said, there are additional signs of hope. Since January, the parish has added three families. And even when there is heavy rain in the hills, people come down to Mass, she said.

Another parish without a pastor is Immaculate Conception in Greene. It’s a “thriving Catholic community being led by lay people,” said Mary Wentlent, the parish’s business manager and activities coordinator. Different retired priests come to say Mass, she said.

When she asked for volunteers to help lead the parish, Wentlent found that people did not want to be in charge, but they said they would do it in a group. “That works out well — it creates enthusiasm with them,” she said. The religious-education program has grown, she said, and she writes a personal letter in the bulletin every week. “People say they like it,” she said. She feels the parish radiates a “sense of family.”

Also leading a parish is Deacon Nick Alvaro, the full-time administrator with the authority of a pastor at St. Stephen the King and St. Joseph in Oswego. In his 17th year in the diaconate, Deacon Nick preaches and officiates at baptisms, weddings, and funerals in addition to taking care of his administrative duties. He began his service in Oswego on Aug. 1, 2016. A resident of Camillus, he drives 45 minutes to that city every day. For his expertise in various aspects of ministry, he credits the mentoring of “many great pastors” with whom he has served.

Deacon Nick said he is building an atmosphere of working together to create possibilities. He said, “We want to be what we were, [but] we need to look forward. … This is an exciting time. It’s [Pope] Francis who says if we don’t change, we’re not alive.”

It is rewarding, Deacon Nick said, “to see people being happy in their faith.”

An audience member asked the panelists how to deal with people who are angry or mean-spirited. “Love them so much they can’t stand it,” he responded.

“I think the presentation by Pat and Mary and Deacon Nick is a wonderful example of what can be done if we’re willing to try to reach out of our comfort zone,” Bishop Robert J. Cunningham said. “I’m very grateful to them for leading the way.”

The bishop took questions from the council. He was asked about new priest-personnel policies. Pastors over the age of 80 will be told, over a two-year period, that the bishop has accepted their resignation.

“Right now we have about an equal number of retired and active priests in the diocese,” he said. “As priests retire from active administration they continue to help sacramentally. And we could not cover the parishes in the diocese without the assistance of our retired priests, who every Sunday are out at a number of parishes celebrating Mass and the sacraments.

“But there comes a time in a person’s life when they have to say, I can’t do this any longer; where people, parishioners, have to say, Father, you’ve worked as long as you can. Now you deserve time off. You deserve, like everybody else does, the opportunity to retire.”

He added: “The priests who have served our diocese are wonderful. The pastors who have wanted to stay active are tremendous. But there comes a time when they need to retire from administration. It doesn’t mean they can’t say Mass on Sunday; they can’t administer the sacraments; they can’t celebrate a funeral for beloved family. They can do all of those things.”

But their retirement from administering a parish, the bishop said, “helps us move forward to the future.”

Also at the DPC meeting:

• Kit Parker, the diocesan director of stewardship and development, reported on the HOPE Appeal.

• A new slate of DPC officers was elected for 2017-2019. Tom Tynan has served as the DPC chairperson for the last four years.

Chairperson David Roman, Northern Region. A parishioner at St. Joseph in Oswego, he has held the DPC office of membership chairperson for the past two years. A retired Oswego County Family Court judge, he continues to work part time as a judge in Oswego City Court.

Vice Chairperson Dr. Marybeth McCall, Eastern Region. Dr. McCall is a trustee of Our Lady of the Rosary in New Hartford. She is a VIRTUS trainer, Eucharistic minister, and lector. VIRTUS is a program that promotes the protection of children, young people, and vulnerable adults. Recently retired, she formerly was the chief medical officer of the merged Faxton-St. Luke Hospital.

Membership Chairperson Marilyn Madison, Western Region. She is president of the parish pastoral council and coordinator of the liturgy and environment committee at Our Lady of Lourdes in Syracuse. She is also a Eucharistic minister at her parish and at St. James, where she also volunteers for the Emmaus Ministry. Emmaus is a mobile ministry that serves people in need in Syracuse.

Secretary Joseph Stanton, Eastern Region. A lifelong member of St. Peter in Rome, he has served for 29 years as a member and officer on St. Peter’s pastoral council. He has represented his parish at DPC meetings for 15 years. He just finished his term as DPC vice chairperson. He records Christmas and Easter Vigil Masses at his parish and sends the recordings to the local-access channel for shut-ins in the Rome area.

In his closing remarks to the Diocesan Pastoral Council, Bishop Cunningham took his cue from Conductor Zander’s DVD that Sister Laura had presented.

“Maybe we can consider the parish pastor the concertmaster for a while,” the bishop said, “and all of you, the members of the orchestra, working together to make a beautiful sound.”