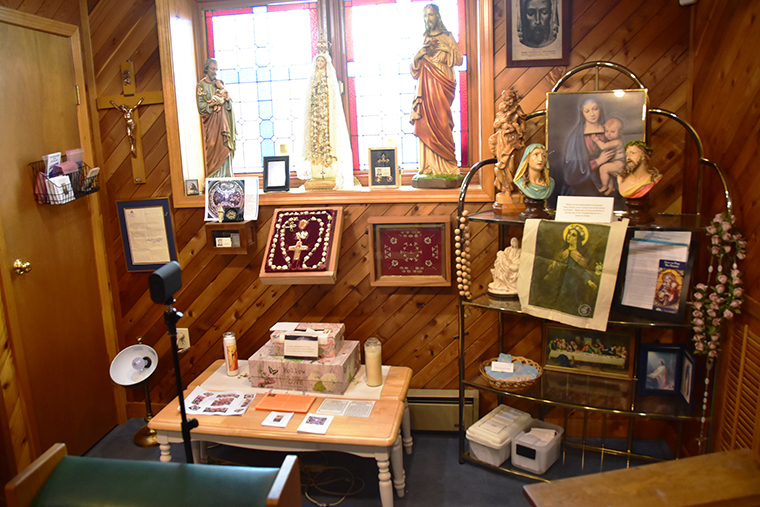 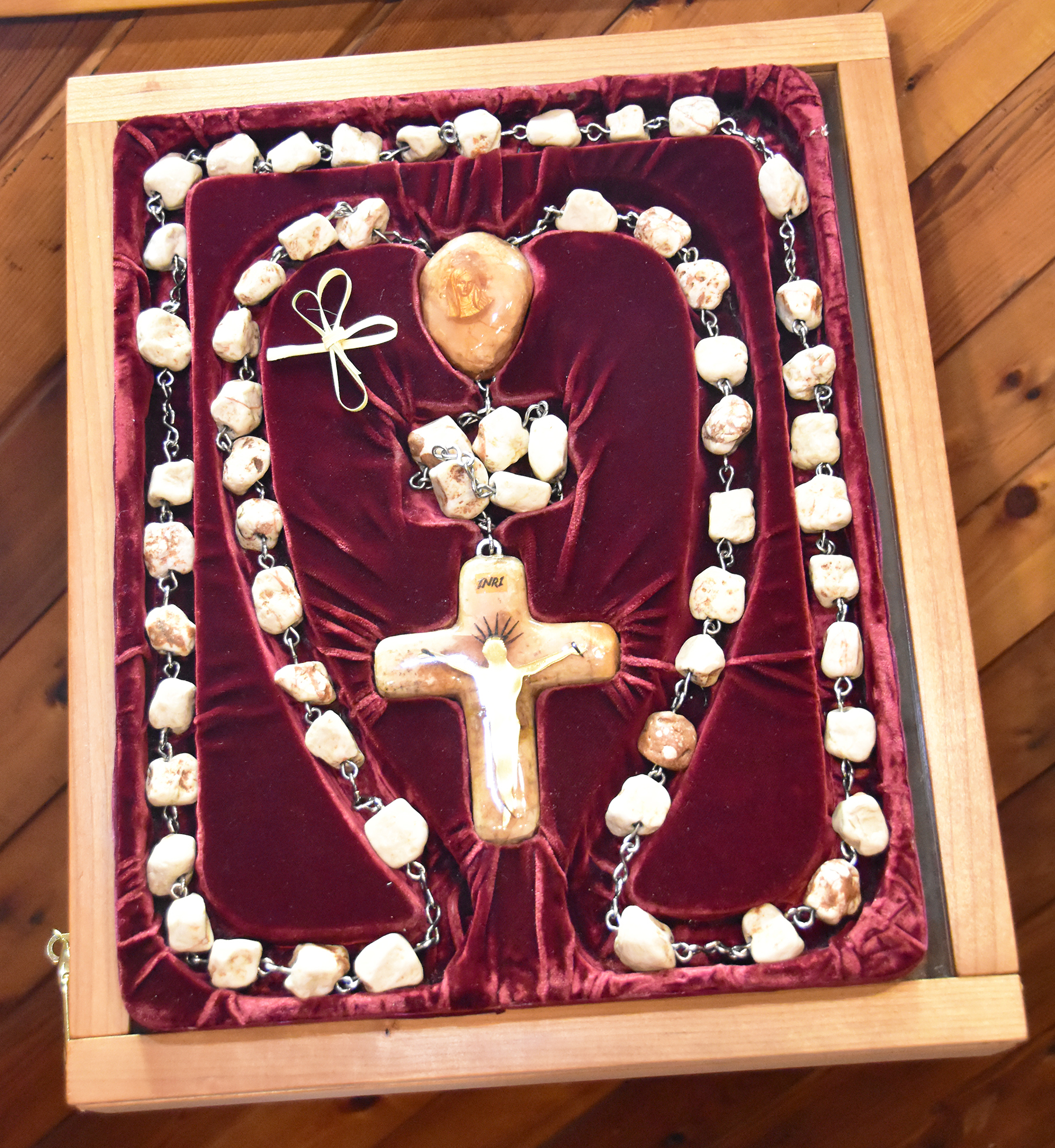 The Pilgrim Rosary is displayed in the chapel at the CNY Marian Center.

Editor’s note: This is the concluding story of a two-part feature on the Central New York Marian Center in honor of Mary’s month, May.

Even a center of devotion can be asked about its success.

“We measure our success one person at a time,” said Dr. Pat Iannolo, the founder of the Central New York Marian Center, which opened 30 years ago in the space below his office in North Syracuse.

On the Feast Day of Our Lady of Fatima, May 13, a young man came in and went into the chapel. He was starting a novena to St. Rita and he saw at cnymariancenter.com that St. Rita is part of the reliquary. “On Monday [May 9], we just put it back in here, so there’s God-incidence and the Holy Spirit in movement,” Harty said.

“I can’t honestly say that a lot of people will experience a mystical experience here,” she said, “but I think many people have. The ones we’ve encountered? Yes. I would say the ones we’ve encountered that we’ve been here when they came in, yes, they probably have a mystical experience that draws them here. Someone tells them about the center. Someone has a prayer need and tells them about — why don’t you go out to the Marian Center?”

The sense of welcome starts even before one enters the building at 5180 West Taft Road. Facing the road is the Garden Shrine of Our Lady of Mount Carmel. “We have some wonderful gardeners,” said Harty, of Holy Cross Church in DeWitt. “And everybody here is good. Everybody comes in, they all bring their own individual gifts and talents. And they use their gifts and talents here to honor Our Lady, that’s what it’s all about.”

Harty asks the public to check cnymariancenter.com or call 315-452-4698 for information and for locations of the Novena of Prayer for Vocations May 27-June 3. She notes that this novena leads to Bishop Douglas J. Lucia’s Holy Hour for Vocations at 10 a.m. June 4. The Missionary Image of Our Lady of Guadalupe will also be present at some locations during this time, Harty advises.

In the plastic box

Sitting outside the door of the Marian Center is a plastic box offering free rosaries. The encouragement to devotion continues inside where a sign says, “Everything on top of this table FREE.”

The rosaries in the little room that constitutes the meeting and gathering area are so numerous they can tangle. “We just recently sent out over 5,000 rosaries throughout the diocese, between confirmation rosaries, the IGNITE [Men’s] Conference, to Colombia, South America, to Ukraine,” Harty said. “We sent a thousand to Ukraine, and when the Bishop made the announcement that he wanted parishes to pray the rosary before or after Masses during Lent, one of the girls got on the phone and started making phone calls, finding out who wanted ’em, and they were delivered out to the parishes or sent out to ’em, so that certainly was an indication that we’re on the right track in our ministry with promoting the rosary.”

Volunteer Ann Marie Fleet, of Christ the King Church in Liverpool, said, “I come here to learn how to be a better person, how to walk the path of Jesus.” She finds out which parishes would like red and white confirmation rosaries; last year the Marian Center sent out over 1,000 of them in a project that was the brainstorm of rosary- maker Barb Colling.

Asked how long it takes to make a rosary, Marian Center volunteer Sharon Bubniak, of St. Margaret’s in Mattydale, said, “It depends on how fast you are. I make them at home while I’m watching television.” It’s not difficult, she said, “if you know how to do the knots. The knots are the hardest thing to learn.”

Other items at the center include statues; statuettes; prayer cards; books; magazines; DVDs; CDs on how to pray the rosary; holy water; artworks; and flyers. A folded up kneeler has a plaque on top of it that says, “Rejoice always, pray continually, give thanks in all circumstances” — a version of 1 Thessalonians 5:16-18.

“A beautiful focal point,” Harty said, is a scene depicting Mary leaving Calvary, bent over as she is being helped by St. John and Mary Magdalene. Harty also noted that at the top of the hill in the back right corner of the scene, three little crosses are visible. “And it just can’t help but move you,” she said.

In the next room is the chapel containing several reliquaries and the Pilgrim Rosary, which is made of stones from Apparition Hill in Medjugorje, Bosnia-Herzegovina. The Pilgrim Rosary, made by Richard Bingold, who died in 2019, is livestreamed from the chapel or from Harty’s home so that people can see it and pray before it.

“People notice different things; it depends on each person’s spirituality,” Harty said. “A Franciscan will walk in and see the St. Anthony relic, and …. a Dominican will walk in and see the St. Thérèse relic. A lover of Mary will see the Pilgrim Rosary. So there is something for everyone … who wants to just get closer to Jesus and Mary. They can do that here. The quiet of this chapel.”

Marian Center volunteer Stan Selwach, of Sacred Heart in Cicero, said that when he came to the Marian Center on a Monday night, “it was the first prayer group I was ever in where people actually got up and hugged each other individually. … I’ve learned so much about Marian devotion that I didn’t know, like Fatima and Lourdes and Medjugorje, and I’ve just grown in my devotion and closeness in my relationship with Mary.”

The center also offers TelePrayer, including the Seven Sorrows of Our Lady at 4 p.m. Fridays.

The Seven Sorrows, Selwach said, is “now my favorite. I never used to say it. Now I love it.”