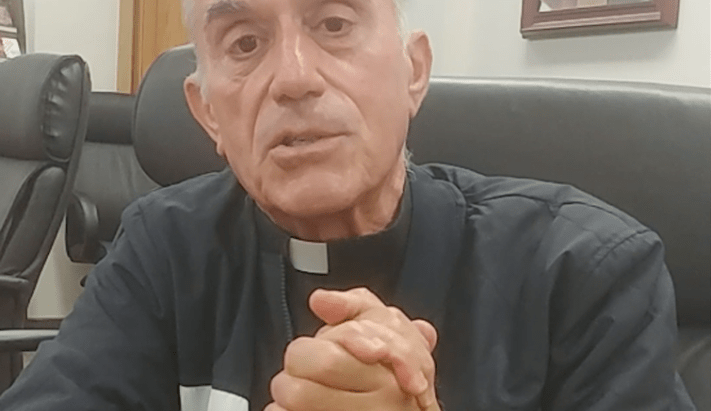 Missionary Father Michael Bassano, MM, called the Sun on Nov. 27 from the United Nations Protection of Civilians (POC) camp outside Malakal, on the east side of the White Nile River in northeastern South Sudan.

That day across the river, he said, a mother of four children who had no food tried to commit suicide. “She got desperate,” Father Bassano said.

The Danish Refugee Council heard of the incident and brought the woman and her children to the U.N. camp.

“We thank God; it’s really a blessing that they were able to bring her here with her children,” Father Bassano said. “Amen. That’s good.” The mom is receiving medical and psychological help and the family is also receiving food, he added.

Father Bassano grew up in Binghamton and was ordained a priest for the Diocese of Syracuse in 1975. He went on to become a Maryknoll missionary, and since 2013 he has served as the Catholic chaplain in the U.N. camp in a country where peace has been a shaky proposition.

A nice gift in the U.N. camp is a 20-kilogram bag of rice, and Father Bassano is happy to deliver. He said 2,255 bags of rice will be distributed to various villages. He cited the generosity of Catholics who contributed to the Maryknoll Fathers and Brothers’ famine-relief fund — close to $100,000. Additionally, he will use $25,000 from a donor to buy food in January. “The food is getting out to the people,” he said.

Father Bassano lives in a tent in the camp, where the mornings and evenings are cool now in the tropics, more than 6,600 miles away from Syracuse. He has to put on a jacket when he rises at 4:30 a.m., but it still turns hot during the afternoon.

“We pray for peace in the world and especially for South Sudan in this coming new year,” he said in a Nov. 28 email.

He included this dispatch:

The feast of Christ the King took place on Sunday, November 25, 2018. In our United Nations camp at Malakal, the Catholic community celebrated this feast with great joy. We had a band of electric guitars, drummers as well as small organ to assist the choirs, the youth dancers and all the people singing with enthusiastic energy. The sound of everyone singing along with our young dancers dressed in their traditional ethnic clothing made it a moment well worth remembering. In my heart, I felt the vibration of their joy as they celebrated. It was as if the roof of our tin structured church was lifted off and the joyful sound was being heard all the way to heaven.

All that was happening that day reminded me of Psalm 42 which says:

Those times I recall as I pour out my soul,
When I would cross over to the shrine of the Mighty One,
to the house of God,
Amid loud cries of thanksgiving,
with the multitude keeping festival.

What a day it was as we celebrated for three and a half hours making a joyful noise to our God who is with the poorest ones seeking peace in South Sudan.