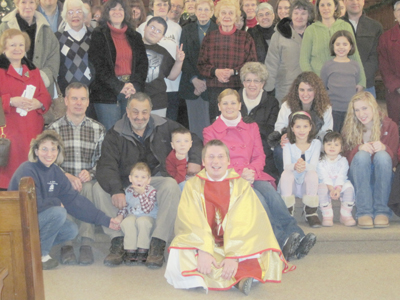 “You have to show the people that you really love them.” This was the advice Father Arthur Krawczenko, administrator of St. Patrick’s-St. Anthony’s Church in Chadwicks, received from his late uncle, a monsignor in Father Krawczenko’s hometown of Bialystok, Poland. It is advice that Father Krawczenko takes to heart. Father Krawczenko was installed as new administrator during a special Mass with the Eastern Region Vicar Father Joseph Salerno on Aug. 2, 2009.

His new parish underwent a merger process that meant closing St. Patrick’s Church in Clayville while beginning the new combined parish at the St. Anthony site. In order to remain connected with the St. Patrick community, Father Krawczenko has chosen to live in Clayville at the rectory at St. Patrick’s.

“I decided to live here in Clayville,” Father Krawczenko said, “and this leaves me open for many conversations with the people here. They share their concerns with me and I invite them to start something new.”

His first year has been filled with opportunities for gathering together and building parish life. According to parishioner and parish council member Carol Gollegly, Mass attendance is up and people are beginning to give the newly-formed parish a try.

“Father Arthur is a breath of fresh air,” Gollegly said. “He is doing a wonderful job and he’s full of ideas.”

Gollegly moved to the area in the 1980s and praised the previous pastors who served at the two parishes. “It’s not easy on the priests. People tend to blame the pastors or the bishops when churches close. They may not really understand it,” she said.

She said Father Krawczenko wants the people to get to know him and he “loves it” at his new home in Clayville. He hadn’t been in the new parish long before he decided it was time to get together for a spaghetti supper. Gollegly said it was very well attended and then recently, Father Krawczenko hosted an Easter breakfast the Sunday after Easter. The breakfast was attended by more than 300 people, she said.

“He wants to bring people together,” Gollegly said. “We’re starting a youth group again and the Holy Name Society is regrouping. We’ve got 29 for First Communion and then 33 for confirmation this year.”

Father Krawczenko, who is in his early 30s, is one of the youngest priests of the diocese. He was 24 years old when he was ordained in Poland and moved to the U.S. upon the personal invitation of now retired Bishop James Moynihan. He has written to the people of St. Patrick’s-St. Anthony’s introducing himself.

In his letter Father Krawczenko explained that his mother was seven months pregnant with him when it was announced on a bus she was riding that Pope John Paul II was elected pope. She described to him a full bus with passengers talking and laughing on their way to work when the driver cried out for them to be quiet while he turned up the radio. Everyone was silent listening to the announcement and this was followed by cheering, crying and praying “out of sheer joy” he wrote. Father Krawczenko said Poland was changed forever when the announcement came.

Father Krawczenko spent his first year in the U.S. at St. John the Evangelist Church in Binghamton as a parochial vicar before spending two years at St. Stephen’s Church in Oswego in the same capacity. Father Krawczenko also served the linked parish of Our Lady of the Rosary in Hannibal during that time. He went to St. John the Baptist Church in Rome, N.Y. in 2006. “I really enjoyed the Italian flavor of the parish community,” Father Krawczenko wrote. “At St. John’s I tasted all the good Italian cuisine and paid for it by gaining 15 pounds. When I went home on vacation, my mother hardly recognized me, but she said I looked good and healthy.”

At the same time he came to St. Patrick’s-St. Anthony’s last summer, a few of his priest friends decided he needed another new addition in his life so they brought Father Krawczenko a puppy before his bags were even unpacked. Father Krawczenko is the proud owner of Bella, a short-haired German pointer, the same breed he had when he was growing up in Poland.

“Bella is very good for connecting me with other people,” Father Karwczenko said. “I spend time walking her and we visit people in the parish and she gets to play with their dogs. At first I thought, ‘Oh my gosh, I’m in  a new place and now a new dog,’ but she’s a joy in my life.”

Father Krawczenko said he is very blessed. “We have a great future with a growing community where the people want to be involved in the parish. I am so happy here because of the people. Anything I have asked for was granted,” he said. “This is a very good parish where people take responsibility for their parish. I am grateful they have very much accepted me.”

One of the parish’s upcoming events is the annual strawberry festival which will be held at St. Patrick’s-St. Anthony’s on June 13.

“We’ll have a big outdoor tent with music and food and activities for youth and young people,” Father Krawczenko said. “Everybody is welcome to come.”