Our family in Philly: At the World Meeting of Families, the Denkenbergers grow in knowledge, love 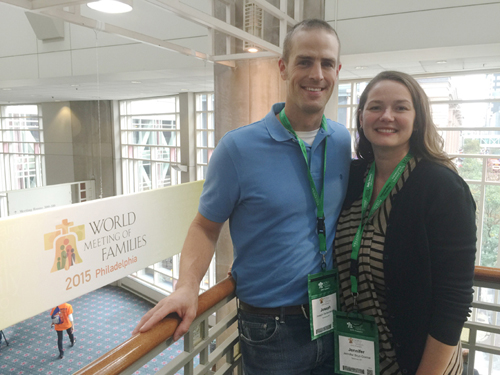 The eighth World Meeting of Families kicked off in Philadelphia Sept. 22, drawing more than 17,500 registered participants from more than 100 countries around the world. The four-day congress, themed “Love is Our Mission, The Family Fully Alive,” featured speakers addressing an array of topics pertinent to today’s families and closed with Mass celebrated by Pope Francis.
Jen Bryz-Gornia and Joe Denkenberger, parishioners of St. James Church in Syracuse, attended the meeting as winners of a diocesan-sponsored contest. The couple, married nine years, are parents of two sons, Wally, 3, and John, 10 months.

In an interview before the meeting, Bryz-Gornia told the Sun, “Our family is the most important thing to us. We find great purpose in each other as a family, as a husband and wife, and then the children that we’re blessed to have and care for and guide. Anything we can do to strengthen our role as parents for them as young human beings, and being good people, and having a strong family unit for ourselves — raising them in that is really important to us. So I’m hoping to get that out of the meeting — and ways that we can not just support ourselves, but help influence and support others too.”

The Sun followed along with the couple as they participated in the congress.

Awed by the size and scope of the meeting, the Denkenbergers dove into day one. The opening keynote was presented by Bishop Robert Barron, the founder of Word on Fire Catholic Ministries perhaps best known for his “Catholicism” series. His talk centered on the notion that all people are made in God’s image and that the faithful are called to share that faith in the world.

A key phrase stuck with Denkenberger. “‘The glory of God is a human being fully alive,’” he recalled the bishop saying. “That really kind of resonated and was something that I sort of needed to hear.”

Bryz-Gornia took special note of Bishop Barron’s observation that who and what a person worships can tell you much about that person. She also appreciated his down-to-earth discussion of the idea that God’s laws are freeing. Many people “think laws are meant to be restrictive — don’t do this and don’t do that,” she said. But Bishop Barron used golf instruction to illustrate his point, she said — once he learned to properly hold and swing a club, his game improved and he started to have fun. “That was something I needed to hear and remember,” she said.

At the end of a long second day, the Denkenbergers were tired but buoyed by the messages of the presentations they attended.

For Bryz-Gornia, a theme ran through them all: “That we have distinct roles as men and women in our family,” she said. “While equal in dignity, they’re special and different in character and we need to recognize that and nurture that in ourselves.” That means working together to help one another become the best parent for their children and the best spouse for each other, the couple agreed.

Denkenberger said he felt affirmed by the sessions.”I’ve felt for some time now a personal struggle between my work and my family,” he said. “I’ve felt that I wanted to be home with the family more and I’ve pushed work away at times.” Sometimes that’s felt wrong, “that the best thing I can do for my family is to sink myself into work, try to be a better employee and make more money so I can support them financially,” he said. “But I feel that I’ve received confirmation that I’m not wrong. It’s right of me to want to be home with the family. Not to say that I don’t have to work, but I play an important role with them and it’s important I be there.”

Day three brought a presentation by Dr. Daniel Mark on forgiveness and how to heal the wounds and stings that families experience.

After a disagreement or slight, rather than focusing on blame both people “should address your responsibility and apologize for why things happened,” Denkenberger explained. Without that acknowledgment and apology, “you have separation,” Bryz-Gornia added. And “if you wait for someone to ask for forgiveness, you’re going to stay in that separation.”

Bryz-Gornia also shared a personal experience of forgiveness — gained though Confession on first day of the congress.

It had been a long time since she had been to confession, she said. “I’ve wanted to. It’s a hard thing to do, admitting what you’ve done wrong,” but “I knew coming in that I needed to [make Confession]; I felt it so strongly in my heart. I needed to start with my heart on a clean slate,” she said.

Face-to-face with a priest from the Philadelphia area, Bryz-Gornia knew she was paired with him for a reason. “This priest said all the right things that I didn’t even know I needed to hear. It was so healthy and such a wonderful way to start this week.”

On the final day of the Congress, the Denkenbergers heard Boston Cardinal Sean O’Malley and evangelical pastor Rick Warren speak to “The Joy of the Gospel of Life” and the marks of joy-filled families. It was a good way to end the week, Bryz-Gornia said, as it “reaffirmed what we do and gives us ideas to strengthen [our family] and help ourselves grow.”

The week went by quickly, she said, and though she wished there had been a way to attend even more talks, the couple made the most of their days at the congress. Bryz-Gornia also noted how grateful she was to her mother-in-law, who traveled to Philadelphia to care for Wally and John during the first three days of the meeting, allowing the couple to focus on the sessions and the experience.

The day before the meeting ended, Bryz-Gornia said she felt closer to her husband, who agreed. “It’s been nice to focus on our relationship and how important it is, in a place that’s meant to get you to focus on it and reflect on it,” Denkenberger said.

“It’s been awesome to be able to focus on each other,” Bryz-Gornia said. “We’re the foundation of our family church, our domestic church, and we need to strengthen each other. To have this opportunity to enrich our beliefs, it’s a great blessing.”