Our Lady of Hope blessed 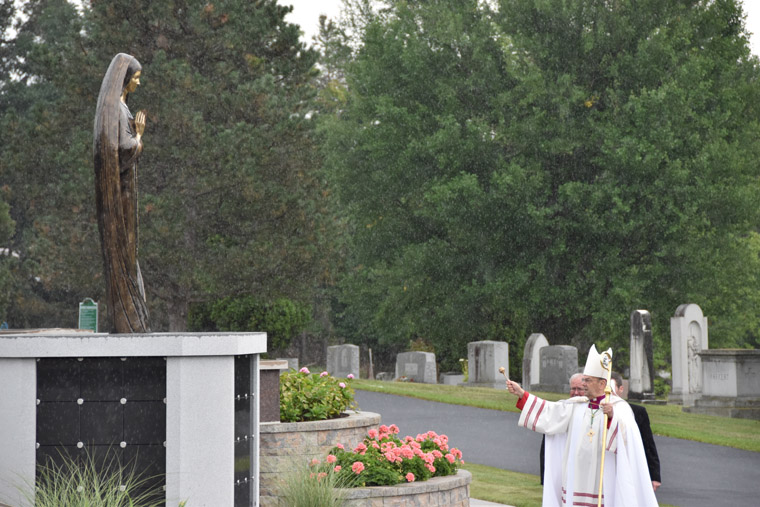 Our Lady of Hope Mausoleum at St. Mary’s Cemetery in DeWitt was blessed and dedicated by Bishop Robert J. Cunningham Sept. 12 in a ceremony held in the newly constructed facility.

The new mausoleum is the second to be built on the 350-acre cemetery grounds; the first was built in 1980, according to Director of Catholic Cemeteries Mark Lazaroski. With more Catholics choosing cremation and space in the mausoleum dwindling, Lazaroski and the board felt additional mausoleum space was necessary, he told the Sun in a recent interview.

Our Lady of Hope offers 1,128 crypts and 1,892 cremation niches. Crypts are spaces that accommodate full-body burials, Lazaroski explained, and are a person’s grave, vault (outside container), and monument.
Some crypts can accommodate one or two people, depending on the style of the crypt. A niche is a space to place cremated remains; various styles of niches are located inside the mausoleum as well as in outdoor columbaria, standalone structures where cremated remains are inurned.

Lazaroski described the special care taken to create a beautiful, peaceful space. The mausoleum is high-ceilinged and light-filled thanks to floor-to-ceiling windows, stained glass and smooth marble. The landscaped garden columbaria outside feature bronze statues of Mary, the Pieta, and St. Marianne Cope, as well as ample space for prayer and reflection, Lazaroski noted. “We wanted people to see our faith,” he said.

The goal was also to create a place that would feel comfortable and inviting — a tough task in a culture that often shies away from the idea of death.

In his 43 years of working in cemeteries, Lazaroski has seen many families put off planning until tragedy strikes, he said.

“We want to encourage people to come in — maybe a husband and wife, or with family — so that they’re making a collective decision,” not guessing at or disagreeing over what a loved one may have wanted, he said.

Numerous burial options ensuring perpetual care are available through all of the cemeteries owned and operated by the Catholic Cemeteries of the Roman Catholic Diocese of Syracuse, Inc. And though the nonprofit may manage them, the cemeteries really “belong to the people buried here and their families,” Lazaroski said.

To learn more about Our Lady of Hope Mausoleum and the Catholic Cemeteries of the Roman Catholic Diocese of Syracuse, Inc., visit www.syracusecatholiccemeteries.org or call 1-800-443-2088.