Our Lady of Lourdes jammed for final Mass 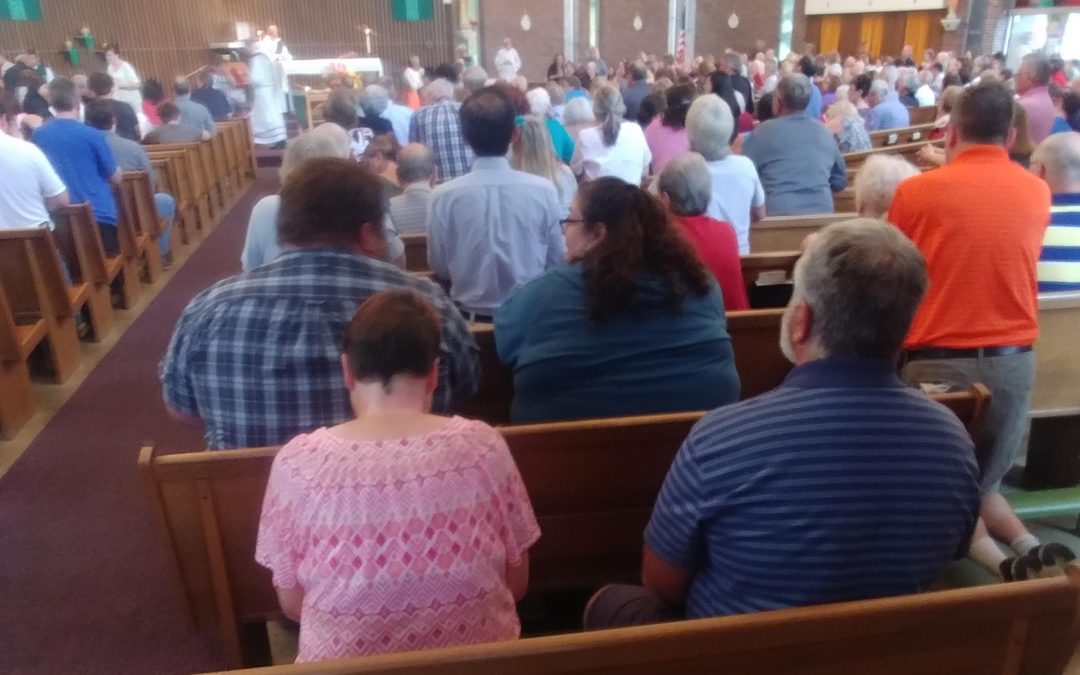 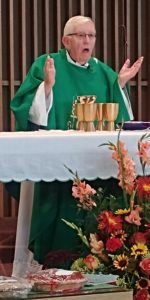 Father Thomas P. Fitzpatrick celebrates the final Mass at Our Lady of Lourdes Church in Syracuse. “Certainly God has blessed this parish,” he told the congregation. – sun photos | tom maguire

Father Fitzpatrick’s  reminder: ‘You still have work to do’

To revive them from their sadness, Father Thomas P. Fitzpatrick had the people stand up and state what they believe.

And they did, obediently getting on their feet and reciting the Apostles’ Creed on Oct. 7 during the final Mass at Our Lady of Lourdes Parish in the Valley of Syracuse.

“YOU are the church, not this building, not ANY building,” Father Fitzpatrick said in his luminous homily. “You are the church.” He noted that the apostles, having witnessed the horror of the crucifixion, went out and preached the word.

“That’s what you do,” Father Fitzpatrick said. “You still have work to do. Go out, and change people and lives.”

Father Ballard thanked Father Fitzpatrick for his “very wisdom-filled homily. Very fatherly to lead this community toward the next step of the journey.”

Lourdes’ journey ended with a full church, glorious music, emotional talks, and terrific treats under a tent next to the church.

“I don’t think there’s anything that touches us more deeply, for many of us if not most of us, than our memories of home,” Father Fitzpatrick said. “You know, the places where we were born, grew up, nurtured — truly our heart still remembers those things as we look in the past. …

“We understand how emotions really come to the surface at times like this because we know we can’t go home again. Shocking, isn’t it? Time moves on. You know, even the apostles found it tough.”

When he came to the parish, Father Fitzpatrick said, it was still fairly vibrant, with a lot of young people. But the parish had lost over 400 parishioners, he said, through death, going to live with the kids, or moving away.

‘The mystery of life’

He said: “That’s a lot of parishioners to lose. … There’s no going back. That’s part of the mystery of life.”

Father Fitzpatrick wants the parishioners to remember all the good deeds that the parish has done over the years: almost 1,500 marriages, as many as 6,000 baptisms, and about 25,000 kids educated in Our Lady of Lourdes School, which opened in 1952 and closed in 2003.

“All the good deeds, all the good priests we had serving here, all the great teachers, all the volunteers — that’s what we take with us,” Father Fitzpatrick said.

He added: “We also take with us the hospitality that this parish shows. I’ve only been in one other parish that’s been like that, just one, besides this one: open hearts, and open minds. … And certainly God has blessed this parish in many ways that we might not ever know,” including people who were converted.

Father Fitzpatrick noted that retired Auxiliary Bishop Thomas J. Costello first came to Our Lady of Lourdes as an assistant.

Bishop Costello served twice at the church. It was his first assignment, for five years, after he was ordained. He came back in 1975 when Msgr. Martin J. Watley died. He stayed three years, until he was named a bishop.

Bishop Costello attended the final Mass at Lourdes and greeted many people afterward. “It was like going back many years,” the bishop said. “They were all people who I served when I was stationed here, and just great to see them on rather a sad occasion. But they’ll do well; they’ll be part of Our Lady of Hope and they’ll make it a great community too.”

Asked what he thought of the final ceremony, he said:

“I was amazed by the crowd. The church was packed. I thought Father Fitzpatrick’s homily was right on; I thought he struck a note that’s just so significant to these people; I thought he did VERY well.” He added that the music was beautiful and it was a great celebration.

“There was great camaraderie in the rectory, there was great spirit among the people, and I was doing the stuff that I’d prepared for for about eight years — I finally got a chance to be the priest that I wanted to be, and the people were very receptive, very kind to me.”

Father Ballard said some important items will be transferring from Our Lady of Lourdes to Our Lady of Hope. He recently climbed up to see how tall the statue of Mary is on top of the church. “It’s about nine feet or 10 feet tall; it’s going to take a crane,” he said, “but we’re going to get it over to Our Lady of Hope.” The congregation applauded his determination.

When he was a teenager, Father Ballard had a dream that as he was going by the church in a car, the statue of Our Lady of Lourdes turned around and looked at him. “Talk about a sign of turning this around and helping to build a new community,” he said.

“There’ll be a home for these items,” he said, “but even more importantly, I hope that it’ll be a home for YOU, that this will be your parish, that this will be your new community, that as we come together we will create a new parish, a new community. It’s going to take time to build, so please be patient with me, and with all of us as we build a new community, but we will get there. We will make it happen. Together we’ll build Our Lady of Hope and it will become our new spiritual home for the next 70 years in this community.”

Father Ballard introduced the congregation to “one of the patriarchs of this parish, George “Ike” Cole, a retired electrical contractor who recently added 20 new 1,000-watt quartz light bulbs to Lourdes Church. He has spent 60 years in Lourdes Parish.

“Our extraordinary church building was designed with many symbols incorporated into its architecture,” he told the congregation. “The wood frame suspended over the altar is referred to as ‘the cloud,’ from which originates light and voice. The vertical oak boards, behind the altar, symbolize the rising of our petitions and prayers toward heaven.

“Brickwork was selected as interior finish because it symbolizes the many who gave of themselves for the good of the parish community. Just as one course of brick provides foundation and support for the next, so, too, has the work of early parishioners sustained us today.”

Another loyal member of the parish, Kathleen Scutt, said of the final ceremony: “I cried through the whole thing.” She noted that her children got a terrific education at Our Lady of Lourdes School.

Scutt introduced several people who presented to Father Ballard some items of significance to the parish, such as the Lourdes 50th Anniversary Book and a portrait of the school. Drawing tremendous applause were a couple of pies made by Cole, who figures he has baked about 1,500 pies for Lourdes’ famous fish dinners. The presenters included Peg Mincher, Larry Abrahamson, Joan Donaldson, Cole, and Mary Lue King.

Another speaker, Patricia McGrath, wife of Deacon Michael McGrath, invited the congregation to take a look at all the historical church pictures that were taped to the back wall. “We’d like you all to linger a while. … Linger and enjoy each other,” she said.

The crowd obeyed Patricia McGrath’s invitation to linger. Soprano soloist Jenny Smacher, who sang “You Raise Me Up” with great intensity and a level of skill that was praised by Bishop Costello, grew up in the area but drove in from Boston for the last Mass. She said, “I was so glad everybody came out, and it was a strange mix of really sad, but also really grateful for everyone who was here all my life.”

Playing the electric piano for the Mass was Peter Prunner, the choir director at Lourdes for 30 years. Told that his choir created a lot of emotion in the congregation, he said, “I’d say so. … I ask my choir members what are their favorite pieces, and they gave me some recommendations, so we used all of their favorite pieces.” Songs included “My All in All,” “We Are Called,” and “One Bread, One Body.”

A prayer for direction

Did they appreciate his 22 pies?

“They did. Many people came over and said how great it was, and the pies I brought them at noon, they were all sold out by two o’clock.”

He and Scutt will be among those who move over to Our Lady of Hope Parish.

“I prayed about it,” Scutt said. “Since Father Ballard knows who I am, I should go there.”