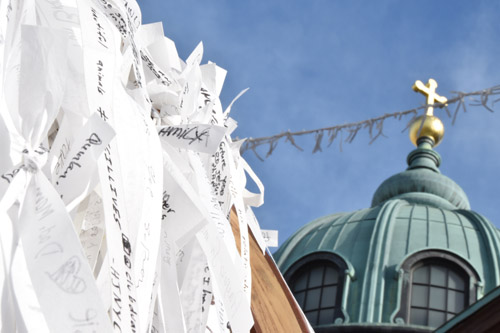 PHILADELPHIA — On the last Sunday in August a handful of workers labored in the hot sun outside the Cathedral Basilica of Ss. Peter and Paul, creating a 10-foot tall wooden structure that resembles a bee hive. They were building a grotto that would display tens of thousands of thin white cloth strips that display people’s prayers and hopes and sorrows.The project is inspired by the painting “Mary, Undoer of Knots,” a favorite of Pope Francis. The white strips of fabric represent people’s “knots.” Visitors are invited to add or remove the knots as a way to seek aid in their struggles or share others’ burdens. By late August, artists had collected more than 30,000 knots.

The 18th century Baroque painting by Johann Georg Schmidtner hangs at St. Peter am Perlach Church in Augsburg, Germany. In the painting, Mary is untangling a long ribbon — a symbol for smoothing life’s difficulties. Pope Francis first saw it in the 1980s, according to press accounts.

The messages, in Spanish and English, reflect broad wishes for peace and deeply personal concerns. “Please save us … forgive us,” said one strip. “Praying for wisdom, team spirit and blessings,” read another. Others sought aid for job searches and healing illnesses.

As Mass ended, a small crowd gathered around the project. “Can I write one?” asked one woman. “I could use a blessing.”

Pope Francis visited the grotto before celebrating Mass on the Benjamin Franklin Parkway Sept. 27. An unplanned stop, the grotto had some 100,000 ribbons tied to it, according to reports.