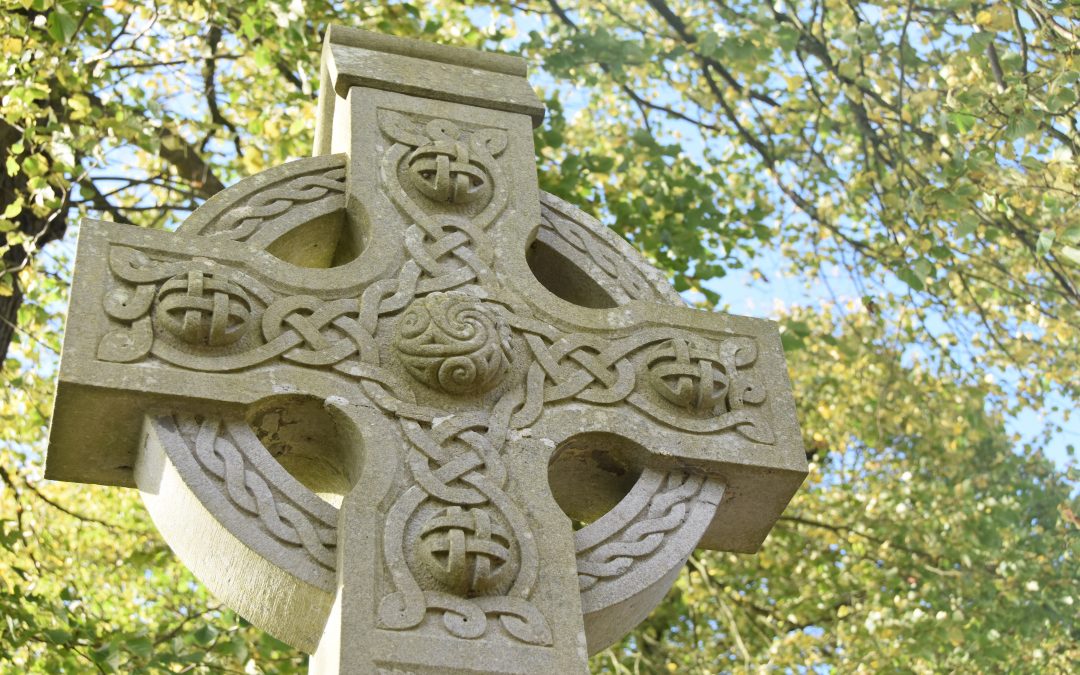 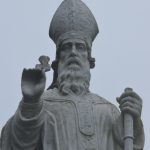 A statue of St. Patrick at the Hill of Tara.

Our day got off to a blustery, rainy start as we set out for the Hill of Tara. The site of ancient ceremony, burial, and ritual, the Hill of Tara was once the seat of Ireland’s high king. Just a handful of us braved the elements to climb the hill, but most of us saw the statue of St. Patrick there. The nearby Hill of Slane is where legend says St. Patrick lit his Paschal fire. 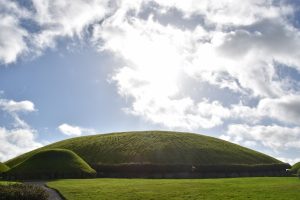 The passage grave at Knowth.

From there, we visited Bru Na Boinne, the site of megalithic chamber tombs complete with carved and decorated stones. The giant mounds are mind-bogglingly huge and complex and wonders of ancient engineering. 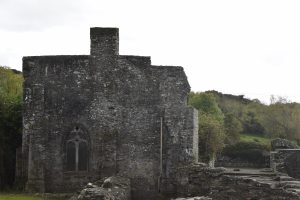 A portion of the ruins of Mellifont Abbey.

We made a stop at the ruins of Mellifont Abbey, the first Cistercian abbey founded in Ireland, in the middle of the 1100’s. Though most of the structures that made up the bustling community of monks have disappeared over time, there are pieces that remain — bases of pillars, arches, the spot where monks would have washed their hands. Squint your eyes and you could almost see them. 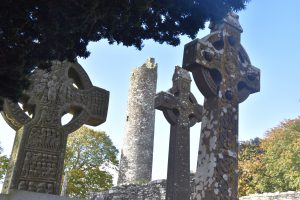 One of three high crosses at Monasterboice, Muiredach’s High Cross is seen at left. In the background is a round tower. Both structures, as well as the two other high crosses at the site, date to the 10th century.

We also visited Monasterboice, the site of a monastery founded by St. Buite. Now a cemetery, Monasterboice is home to three spectacular high crosses and a round tower — all dating to the 10th century. 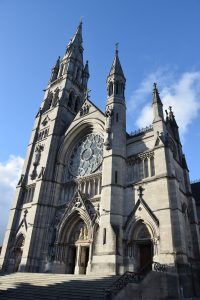 We ended our day with Mass at St. Peter’s Church in Drogheda, where we were able to learn about and pray before the relics of St. Oliver Plunkett. A priest, archbishop, and educator during the 1600’s when Catholicism in Ireland was persecuted, St. Oliver was martyred in 1681. His head was preserved after he was hanged, drawn, and quartered and it now rests in a magnificent reliquary in the church for all to venerate. The church is also home to a relic of the True Cross, a gift from the Bishop of Ghent, and the chair in which St. John Paul II sat when he visited Drogheda in 1979.

We’re carrying your intentions with us as we go. St. Oliver Plunkett, pray for us!

(All photos for the Sun by Katherine Long)