VESTAL — More than two dozen young people moved the earth on June 7. They used shovels, hoes and their hands to prepare the 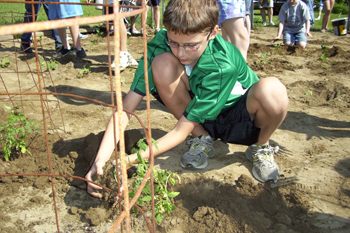 soil for planting a garden for the needy.  Robby Brown was packing the dirt near a tomato plant that had just gone into the ground.

“We’re just making some walls so when they pour the water it’s not just going to run into all different plants,” he said. “It’s going to stay with one certain plant. It will do it with all of them.” The sixth grader hadn’t planted before, but wants to do more. “I like it a lot.”

This is the fourth year that the Youth Group at Our Lady of Sorrows planted a garden. The plot is located behind the old school building on a hill, within sight of a wooded area that’s home to a variety of wildlife. So far, a strong fence has kept the garden from being dinner for deer or groundhogs. Plastic grocery bags blow in the wind as a further distraction to the deer.

Eleventh grader Mike Young is a veteran planter. “It’s better than sitting at home on my computer all day,” Young said. “It’s a good thing for me to do. So I come out and help people. We give it awhile and it grows and we usually get a lot of food out of it.“

Tomatoes are a favorite for Young and fellow 11th grader Zach Mulligan. “I’m here at the beginning and we usually check back on it a couple of times through the year to make sure everything is going well,” he said. “It’s turning out pretty well.

“I like the fact that you can put your faith working toward a certain goal, because that’s what Jesus wanted us to do. He wanted us not only to look after ourselves but give back to others as you would yourself,” Mulligan said. “I think it’s important that we make this garden because it’s going toward a good cause, such as helping people eat who don’t have food. I think this garden is one of many ways we can give back to the community.”

Nearby, seventh grader Belinda Pelicca is working with a handful of dirt, creating some mounds near plants. “I’m here to help with the church,” she said “I think the garden is for the community.”

Preparation is important before the planting gets underway. Adults like Scott Warden have been working with the plot each of the four years. It starts with roto-tilling, which takes a couple of hours. Then the fence has to be fixed, with posts pounded in securely. Worden said they have to be deep enough to keep out the animals. “The deer and the groundhogs want to get in and eat all the food. Then the kids come in and they pick the rocks, just before we start planting,” he said.

“I like to see the kids come together and work as a team and accomplish a goal,” he added. “It looks really good when they’re done.”

Deacon Dale Crotsley, Our Lady of Sorrows Youth Minister, took a moment to reflect as he leaned on a shovel in the midst of the dirt and fresh plantings. Counting off the rows, Deacon Crotsley figured there are about 70 tomato plants.

“Every time we pick we pick some 150 to 200 pounds of produce between everything we have,” Deacon Crotsley said. “We pick two or three times a week so we pick thousands of pounds.”

The OLS Youth Group has helped two food pantries. They originally directed the produce to CHOW, the Community Hunger Outreach Warehouse. But since CHOW now has its own gardens, they send their harvests to Catholic Charities of Broome County. Crotsley notes that people in need will take all the vegetables the same day they are delivered to the food pantry.

“Our theme is to follow Christ and that’s what we’re doing, helping the poor. This is one of the main things we do,” Deacon Crotsley said. “We also have the CHOW Walk which we do every year. Fortunately we’ve been able to raise almost $40,000 for CHOW.”

Deacon Crotsley said the youth ministers of the parishes in the Southern Tier are combining efforts for this fall’s Hunger Walk to get more money for CHOW.
“We’re hoping to put a $25,000 check out there.”