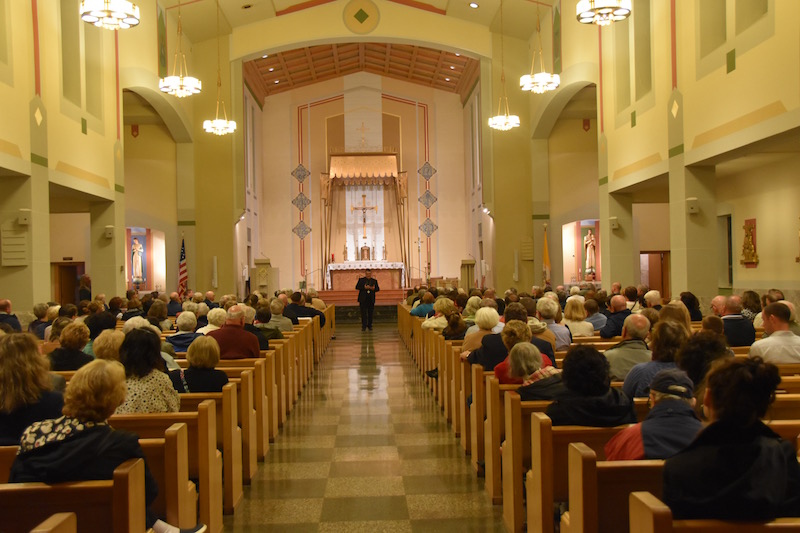 The Oswego parishes of St. Joseph, St. Mary of the Assumption, St. Paul, and St. Stephen the King will reopen while Bishop Douglas J. Lucia undertakes a 90-day review of the process that led to their July merger to form Christ the Good Shepherd Parish. The decisions to suspend the merger and undertake the review come in response to an appeal submitted to Vatican officials.

Bishop Lucia made the announcement at a parish meeting held Oct. 7 at St. Joseph. The meeting followed recitation of the rosary at St. Mary and celebration of Mass at St. Joseph.

“Tonight I’m here because, as you might suspect, I have received some communications about what happened on July 1,” the bishop told those filling the pews.

Pastoral leaders of the Oswego Catholic community announced in June 2018 the parishes would begin a process to form one faith community that would worship on one church campus, citing declining population, participation, and resources, among other factors. Christ the Good Shepherd was selected as the community’s patron in August 2018 and St. Paul Church as its worship site in May 2019. The individual parishes celebrated their final Masses June 29 and 30. On July 1, the four parishes merged, forming the new parish of Christ the Good Shepherd.

Many voices called for a reversal of the decisions. The St. Mary of the Assumption Preservation Group submitted to Archbishop Christophe Pierre, apostolic nuncio to the U.S., in July an appeal asking for a review of the process, according to a report by Oswego’s Palladium-Times. And even before his Aug. 8 ordination and installation as Bishop of Syracuse, Bishop Lucia said, he received communications from members of Oswego’s Catholic community.

At Monday evening’s meeting, the bishop commended the hard work done to bring Christ the Good Shepherd Parish together and stressed his belief in the importance of the parish community.

“I think, more than ever, that it’s very important in a community the size of Oswego that there be a Catholic community,” Bishop Lucia said.

“I have been getting the sense that not everybody is together,” Bishop Lucia said.

That sense led him to arrange an Oct. 7 visit to the parish and its people, planning that occurred while he and Christ the Good Shepherd pastor Father John Canorro were attending the annual clergy convocation in Alexandria Bay Aug. 23 to 25, he explained.

Bishop Lucia said a letter from Cardinal Beniamino Stella, Prefect of the Vatican’s Congregation for Clergy, regarding the submitted appeal was waiting for him when he returned from the convocation.

Bishop Lucia said that under canon law, when an appeal is made, “the action that has taken place is suspended.” In this instance, Bishop Lucia said, suspending means “— and the cardinal is asking me to do it…. I will reopen the churches while we study.” The bishop’s statement was met with applause from the crowd.

Bishop Lucia noted “the one thing that I want to be cautious about is that I really think we have a good thing in Christ the Good Shepherd Parish.” However, he added, “I do think it’s okay for us to take a step back and look at what has happened.”

He assured the assembly that “the process isn’t starting all over again,” but rather that the study “gives me an opportunity just to look at everything.”

The bishop said he has heard the concerns about church buildings but that his first concern is “how do we build one community.” For instance, as the study process unfolds, there will be one faith formation program and one bulletin for the community, he said. Bishop Lucia also said that St. Peter’s Church in Oswego needed to be brought into the process.

The review period will be 90 days, the bishop said, after which he will write his votum.

“But when I say write the votum,” he told those assembled, “what I’m saying is we’re going to write it together. When I send something to Rome it’s going to be what we come up [with] together, with your pastor, which will make Christ the Good Shepherd truly what it’s meant to be: one Catholic community.”

Bishop Lucia spent more than an hour listening and responding to questions and comments from the crowd. Members of the St. Mary of the Assumption Preservation Group spoke earnestly about their love for their church and parish, as did members of other churches. Other speakers called for transparency in the study process. Still others urged unity in the faith community.

What the suspension and study will mean for Mass schedules and other logistics will be determined in the coming days, Bishop Lucia later told the Sun.

After the meeting ended with prayer, Father Canorro spoke to the Sun of the work ahead. As the bishop noted and many echoed, Father Canorro said, “we’re trying to build one Church…. That as we are the universal Church and we are a particular Church here in Oswego County — finding ways to bring everybody together to be that one Church.”

Coverage of this story will be expanded and ongoing.