Reverencing the past, preparing for the future 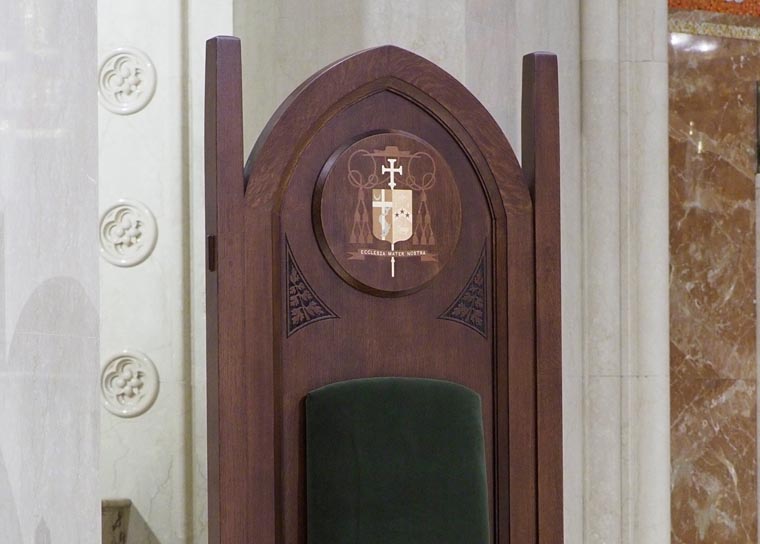 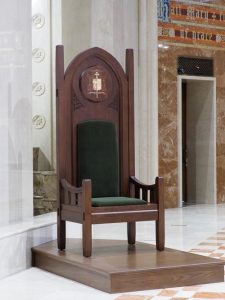 “I am very excited about the restoration. Both Stickley and the Cathedral are so steeped in history and have a reverence for the past as they prepare for the future,” said Stickley CEO and Chairman of the Board Aminy Audi. “That’s something that resonates with our family.”

Bishop Robert J. Cunningham also noted the significance of history and tradition. “Ever since the Church emerged from the catacombs and our ancestors in the faith began worshipping in basilicas, the chair of the presiding person always received prominence. In Latin, we call that chair the cathedra, which is where the name ‘cathedral’ comes from. I am especially grateful to Mrs. Aminy Audi, Edward Audi, and the Stickley family for crafting this beautiful chair,” he said.

The cathedra and its accompanying sanctuary furnishings are the products of a creative collaboration between Stickley craftspeople, led by Engineering Manager Jim Rider II, and McPherson, Simmons Bros. & Sons Architectural Design Studios of New Jersey, led by Troy Joseph Simmons, whose firm provided liturgical design direction for portions of the Cathedral’s restoration.

Simmons and Rider worked together to marry McPherson, Simmons Bros & Sons’ designs for the furnishings, created with  an eye to the Cathedral’s English Victorian Gothic style, and Stickley’s distinctive Mission style and construction characteristics. The result is a one-of-a-kind suite of furniture — including the very first cathedra made by Stickley — that Simmons and Rider refer to as “Arts and Crafts Gothic” or “Gothic Mission Style.”

The pieces are “of the period” of the Cathedral’s construction in the 1870s, Simmons said, noting also the influence the medieval Gothic period, with its focus on handcrafting and following guild practices, had on the Arts and Crafts movement from which the Stickley tradition comes.

Rider noted how the design of the cathedra echoes the architectural details of its future home. “The Cathedral has these beautiful arched ceilings. I think the arch at the top of the bishop’s chair really ties in with that,” he said.

The cathedra stands some 7 feet high and 3 feet wide; Rider estimates it weighs about 250 pounds.

“Stickley is known for quartersawn solid white oak and that’s what we chose to build these [pieces] out of, through mortise and tenon construction,” Rider said. The specialized cut highlights the wood’s grain, and the construction — a piece is fitted in to an opening in a solid post, then pinned with a dowel — ensures lasting durability.

“I love the fact that it [the cathedra] has these great big, beautiful quad posts that come up and round at the top. The sweeping arms I think are very beautiful,” Rider said. “The bishop’s crest — I think that really makes a statement.”

A removable piece set into the chair’s back, Bishop Cunningham’s coat of arms is depicted in several different types of inlaid wood. The design was drawn by McPherson, Simmons Bros. & Sons’ senior draftsman in New Jersey, finalized in Manlius by Stickley’s design department, forwarded on to their Vietnam plant, then sent to Manlius for final machining.

Also making a statement are the tiles set into both the cantor’s stand and the ambo. All were created by Moravian Pottery and Tile Works in Doylestown, Penn. The historic pottery was founded by Henry Mercer, a notable figure in the American Arts and Crafts movement, and continues to produce reissues of his designs.

“It seemed like an obvious opportunity to bring together in one project two of the founding companies of the American Arts & Crafts Movement,” said Simmons, who has worked with the Moravian Tile Works on other projects.

The cantor’s stand features tiles depicting “the four humanities — music, art, architecture, and literature — because that is where those who are skilled in the humanities share on behalf on the faithful,” Simmons explained. 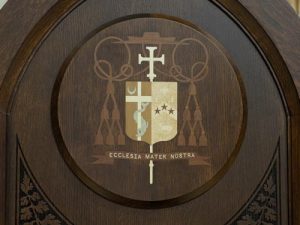 The ambo, where the Gospel will be proclaimed, features tiles symbolizing the four evangelists, Matthew, Mark, Luke, and John. These tiles are of the same design as those presented to Pope Francis in 2014 by then-Pennsylvania Governor Thomas Corbett and his wife, according to the pottery’s website.

Rider estimates about six months were spent on the total development process of the furnishings. Shawn Gilles built the ambo and cantor’s stand and Dung Tran built each of the chairs, including the cathedra.

In addition to the beauty of its construction, Bishop Cunningham cited a special reason for his appreciation of the cathedra.

“One of the reasons for my happiness is that at this time, when there are so many questions about migrants and refugees, the Stickley company employs people from 37 different countries — migrants, refugees — and somehow, when I look at the chair or sit in it, I cannot help but be reminded of the contributions so many peoples have made to the city and the Diocese of Syracuse. They enrich us by their presence. For me, it’s a beautiful symbol of what many people working together can do, and I hope for others it will be also,” he said.

Aminy Audi and her husband Alfred first became involved in local refugee resettlement in the mid-80s when their church, Pebble Hill Presbyterian, sponsored a family. They had already provided housing, but announced one Sunday morning that they needed to find the husband a job. 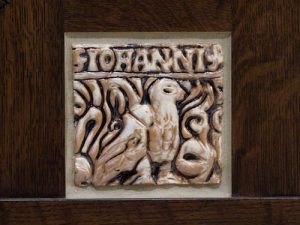 “Alfred and I were sitting in church and we looked at each other and we said, ‘We can offer him a job,’” Audi recalled.

“We started working with the refugee resettlement program knowing there were many refugees who needed jobs and who, given a chance, would contribute to the growth of any company. I am very, very proud when I look at the refugees we have here who now speak English, they own homes, they pay taxes, their children are in college, and they are contributing members to this society and certainly contribute to our success as a company,” she said.

“We admire very much the mission of the Church and the role that Catholic Charities plays, in particular, in helping resettle refugees,” Audi said. “We have worked both with Catholic Charities and InterFaith Works on resettling many refugees.”

The finished products are a beautiful tribute to all the talents at Stickley, Audi noted. “We’re honored, we’re humbled, we’re privileged, and we’re delighted to see the restoration take place,” she added.

Audi hopes the chair, presented as a gift to the diocese from Stickley and the Audi family, will be a place from which “many words of wisdom will be spoken… words of wisdom that will contribute to a better future for all of us.”