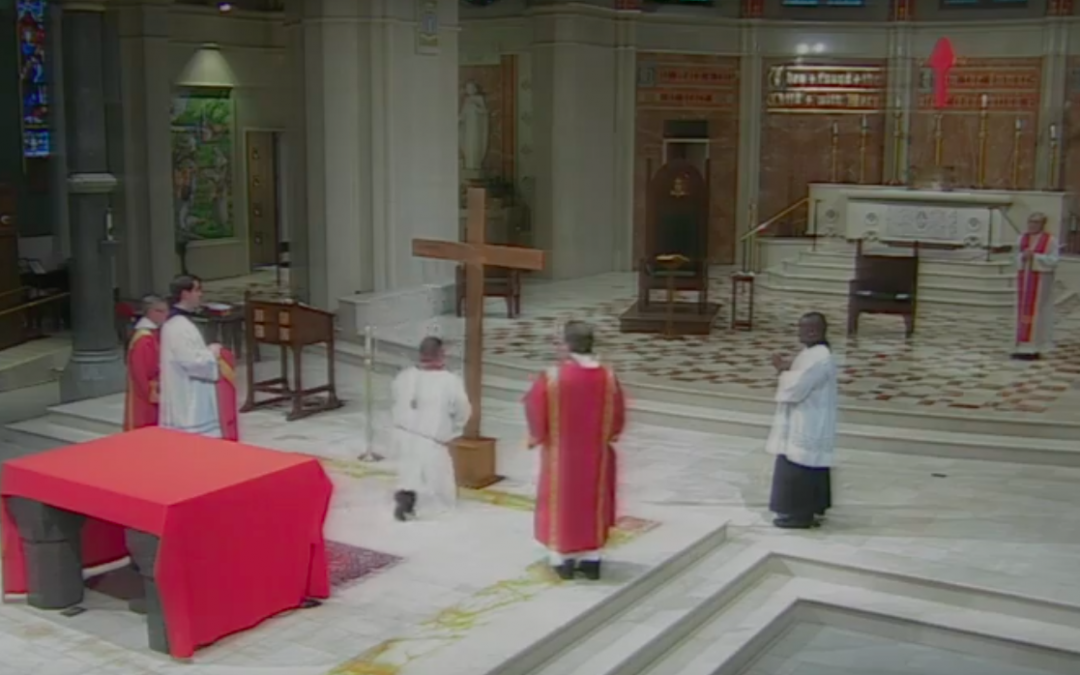 A few minutes before 3 p.m. April 10, Bishop Douglas J. Lucia carried a wooden cross, covered with a red cloth, to the edge of the altar at Syracuse’s Cathedral of the Immaculate Conception. “Behold, behold, the wood of the cross, on which is hung our salvation,” he sang three times during the Veneration of the Cross.

The Good Friday ritual, Celebration of the Lord’s Passion, added to an already somber mood as schools, businesses, and churches worldwide remain closed to stem the spread of the coronavirus. Bishop Lucia and a handful of clergy and others marked the anniversary of Jesus Christ’s crucifixion and death about a month after the coronavirus started spreading at an alarming rate in the United States.

Cathedral’s Good Friday service, the midpoint of the Easter Triduum, typically draws several hundred worshipers to the Liturgy of the Word, the Veneration of the Cross, and the Service of Communion. By tradition, the altar is bare of flowers, and the crucifix is shrouded with cloth. This year there was no hustle and bustle outside the Cathedral in one of the busiest corners of downtown Syracuse. Voices echoed in the empty church while more than 1,000 people viewed the 2 p.m. service.

Bishop Lucia celebrated his first Holy Week as shepherd of the seven-county Diocese of Syracuse through recorded messages and livestreamed services. On Palm Sunday, he blessed palms no one could bring home out of fear the virus would spread. Holy Thursday’s ritual washing of parishioners’ feet, recalling Jesus’ act of service to his disciples, was omitted.

As light snow fell in most of Central New York, Bishop Lucia led a service that barely mentioned the pandemic. His homily focused on the significance of the reading from John’s Gospel, which tells the story of Jesus’ arrest, trial, and execution.

“We hear him cry out his final words: I thirst. It is finished,” he said. “He breathes his last. Sounds like it’s done. It’s over. He hands over his spirt. It looks like death won. The son of man hangs on the cross, lifeless.”

His last words — translated to Greek as tetelestai — are “the final punctuation on a sentence begun before the beginning,” the bishop said.

Jesus’ last words were “spoken in love, spoken across space, time, through ages, prophets, patriarchs, matriarchs, sages, and in these last days, spoken to us by a son: Jesus. The final punctuation on a sentence spoken and lived in love and given as a final commandment: So that as I have done for you, you should also do.”

“Brothers and sisters, as you and I find ourselves on Calvary again today, and in ways we never expected, let us not forget God’s sentence of love on the cross.”

Many parishes used YouTube or social media platforms to share Good Friday services or Stations of the Cross. At St. Ambrose in Endicott, Deacon Thomas Harley delivered the homily at the parish’s livestreamed service.

“It’s not simply that Jesus died for my sins and yours,” he said. “No. He died to save the world.”

Society’s evils — including homelessness, disease, global warming, and poverty “is ultimately the fault of some human being,” he said.

While humans did not create the coronavirus, greed and selfishness may have made it worse, he said, adding, “Fewer people might have been infected if we had more regard for one another at the onset.”

Jesus’ sacrifice, torture, and death are meant to overcome sinfulness. “On Good Friday we kiss the cross because we wish to honor our own Christian mission: To be what we are called to be, human beings in the mold of one modeled for us by one particular one of us: Jesus the carpenter of Nazareth and Galilee.”

At the Cathedral, an explicit reference to the pandemic came during the Intercessions, which included a USCCB prayer. “Look with compassion on our world, brought low by disease; protect us in the midst of the grave challenges that assail us,” it says. “In your fatherly providence grant recovery to the stricken, strength to those who care for them, and success to those working to eradicate this scourge.”

During the Veneration of the Cross, Bishop Lucia removed his chasuble and shoes, genuflected, and kissed the cross.

He later distributed Communion as the cantor sang, “Were You There?” which recounts Jesus’ crucifixion.

A few minutes after 3 p.m., the time Jesus died on the cross, Bishop Lucia gave a final blessing. Then he and others quietly walked out of the sanctuary, leaving behind the bare wooden cross.