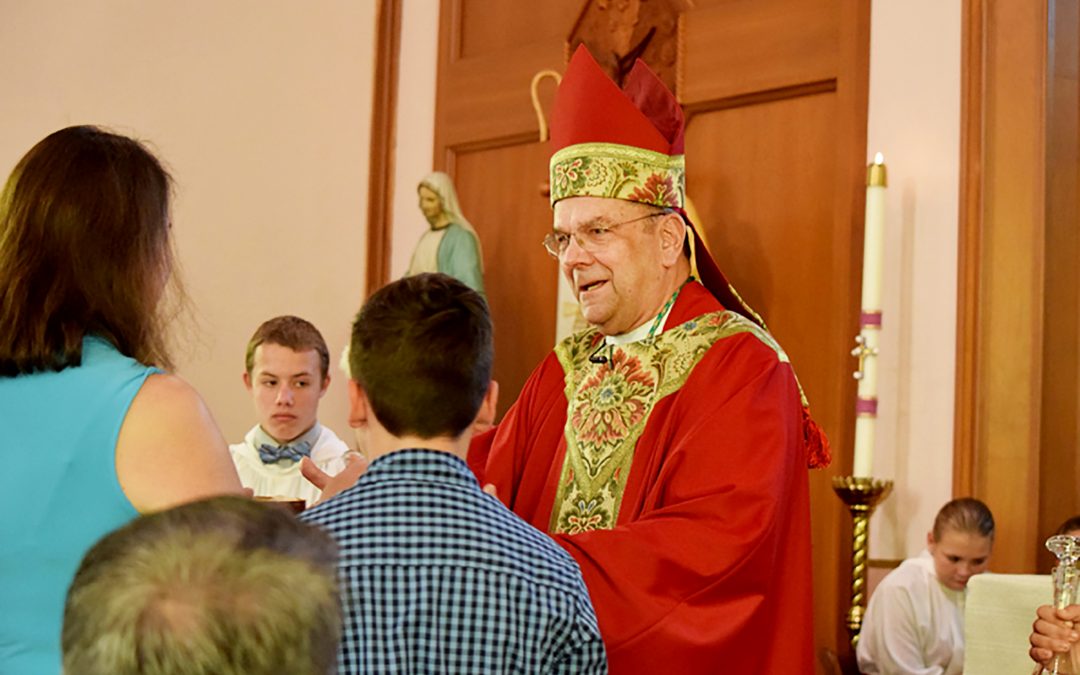 A little prayer and a visit from the Holy Spirit turned Amy Surrette into a composer, just in time for St. Helena Church’s 100th Anniversary Mass.

Surrette, the music director at the Sherrill church, had approached the pastor, Father William A. Mesmer, about hiring a composer to do a different setting for the eight parts of the Mass that are sung, such as the Gloria, the Sanctus, the Our Father, and the Agnus Dei.

Father Mesmer looked at her, she said, as if she had five heads, so she came up with the Mass of the True Cross herself in a few weeks at the beginning of the summer. “I just asked [for inspiration] and it just came,” she said. Trained in music but not composition, she had nevertheless composed alma maters in the past. She was a music teacher at various schools, including a two-year stint at Bishop Grimes Junior/Senior High School.

Surrette taught the parish the new melodies and harmonies so that the music was ready for the Eucharist of the Exaltation of the Holy Cross on Sunday, Sept. 17, when Bishop Robert J. Cunningham officiated.

“We have been practicing for weeks,” Father Mesmer had said in an email leading up to the Mass.

The new music, Surrette said, consists of a lot of minor keys but they always resolve to major at the end to reflect the struggle from the crucifix to the joy of the Resurrection. The program for the Mass includes these words: “St. Helena, finder of the Cross, pray for us.”

Commenting after the Mass, Surrette said, “Everything went spectacularly. The people sang well and I think the bishop was pleased. … The church was packed, not an empty seat to be had.”

Surrette said the choir “really put their all into it.” The choir members, she said, ranged from two 16-year-olds — Claire Bosley and Tida Niles — to 93-year-old Esther Juscza.

“Many, many compliments at the Mass,” Surrette said. “It was just a joyful experience all the way around.”

Among the most touching sights of the day, she said, were the beaming faces of the most senior parishioners, seated in the front. She also noted the effort of the volunteers who set up the tent outside the church; it drew people from around the community to ask what was going on.

In his email, Father Mesmer said St. Helena is “the mother of Emperor Constantine, of Roman Empire fame, and she is the ‘founder’ of the ‘true cross.’ Her feast is associated with the Feast of the Exaltation of the Cross, Sept. 14th. Thus our 100th Anniversary celebration will be on the following Sunday.”

The church’s first Mass was offered in a Sherrill resident’s home in 1917, Father Mesmer continued.

“To fill in the next hundred years, I personally thank, on behalf of the 516 families who celebrate their faith here, the Holy Spirit for working through and within the countless people of faith who have made this celebration a reality.

Following the Mass, the parish had a family feast under a giant tent. Each family was presented with a sizable cast pewter medallion.

“St. Helena,” Father Mesmer said in his email, “please continue to pray for us. Without your prayers, and loving support from before God’s throne, countless families would never know the joy of being a disciple of Jesus Christ, our brother, our friend, our Lord, our light.”

St. Helena parishioner Jack Stone said his wife, Dorothy, calls Sherrill “her little piece of heaven right here,” and the parish is a big part of that.

Jack, 88, was a trustee, an extraordinary minister, and a lector at the parish for a number of years. He spent four years aboard an aircraft carrier during the Korean war. “You get back here, you can really appreciate a town like Sherrill,” he said.

Jack was three years old when his father died. Jack remembers his mother walking the four children to confession. He recalls his brother griping to their mother, “‘Church, church, church.’ She said, ‘It won’t hurt you a bit.’” He added: “We’ve loved every minute of it.”

Jack and Dorothy, 97, have been married 36 years; their previous spouses died. The four of them had known one another for years. During the anniversary Mass, Father Mesmer had determined that Jack and Dorothy, who uses a wheelchair now, would be in the first pew. “It’s a good collection of good people,” Jack said of the parish.

Sue McIntyre is in her fifth and last year as a trustee at St. Helena, where she finds a “welcoming, nonjudgmental atmosphere of faith” and a sense that what people have to say matters.

The parish also helps out at Utica’s Hope House, where people who are indigent or homeless go for meals.

Father Mesmer and Deacon Elbert Niles form the backbone of the parish, McIntyre said. Father Mesmer is a wonderful homilist who “takes Scripture into the modern age” and serves as a great source of strength for people who have an illness in the family. He also has a terrific sense of humor, she said.

Deacon Elbert is accessible and friendly with a strong work ethic, she said.

Another charitable member of the parish is Patrick Mautner, who coordinates families to volunteer preparing or serving meals every month at Hope House.

The people of the parish have been pretty good at volunteering at Hope House the third Sunday of the month and also the fifth Sundays when they occur, Mautner said, and the beneficiaries are appreciative: “They’re glad that people like us do that.”

Laurie and John Barron volunteer for a lot of different work at St. Helena. They have been married almost 40 years, and Laurie was baptized there and had her First Communion and Confirmation there.

“Anything that needs to be done, we do it, if we can,” Laurie said. “It’s our parish family. We wanted to do something for the church. Father asked us if we would help out, and you want to say yes to your priest because it’s the right thing to do. But it’s a privilege for us, we enjoy doing it.”

The Barrons clean the church and set up for meetings and classes. John also takes care of the gardens around the church and handles snow removal in the winter.

Laurie is on the 100th-anniversary committee, and John was involved in the setup of the chairs and tables and the cleanup.

The parish, Laurie said, “just feels like where we belong.”