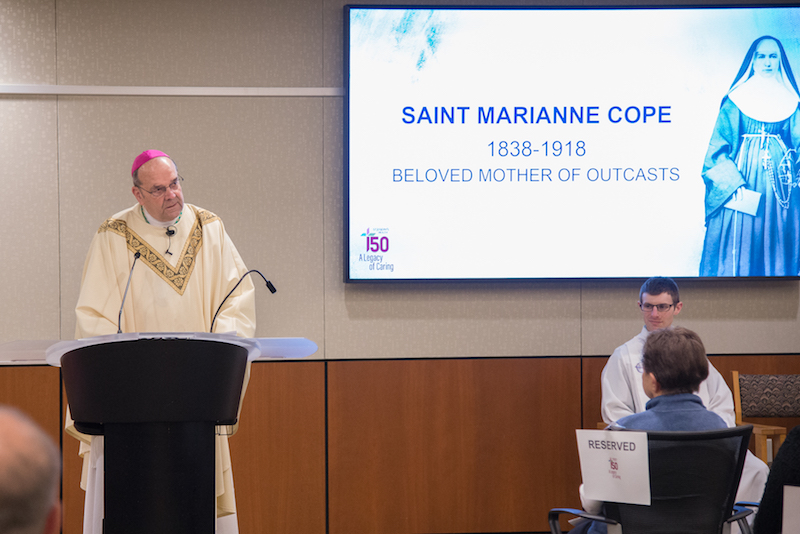 When Mother Marianne worked at St. Joseph’s Hospital in the 1870s, she devised a system to get doctors to respond to medical emergencies. Someone would ring a bell out a window, and boys on the Syracuse streets would race to alert a physician, according to Sister Patricia Larkin, OSF. The first boy to get a doctor to the hospital received a reward, she said.

The method reflects Mother Marianne’s ingenuity, determination, and commitment to people in need, said Sister Larkin, a member of the leadership team of the Sisters of St. Francis of the Neumann Communities. “I see her as my role model in trying to get things done,” she said Wednesday after a Mass celebrating the feast day of St. Marianne Cope.

About 120 people attended the Mass, concelebrated by Bishop Robert J. Cunningham and St. Joe’s chaplain Father Severine Yagaza, and reception, which kicked off the 150th anniversary of St. Joseph’s Health. Franciscan sisters opened St. Joseph’s Hospital on May 6, 1869, in a former dance hall on Syracuse’s North Side. The hospital’s charter stated, “In the admittance and treatment of patients, no distinction shall be made because of theological belief, nationality, or color.”

Mother Marianne, who served as administrator of St. Joseph’s from1870 to 1877, was canonized a saint in 2012. She grew up in Utica, served as leader of the Franciscan community, and ministered from 1883 to 1918 to patients with leprosy in Hawaii. She was the 11th American named a Catholic saint.

St Joseph’s Health will celebrate its 150th anniversary with several events, including a May 6 celebration at the hospital and a May 31 gala at the Syracuse Oncenter.

Mother Marianne “was driven by a passion for the poor and the ailing,” Leslie Paul Luke, president and CEO of St. Joseph’s Health since 2017, said before the Mass. “It’s a legacy we try to follow.”