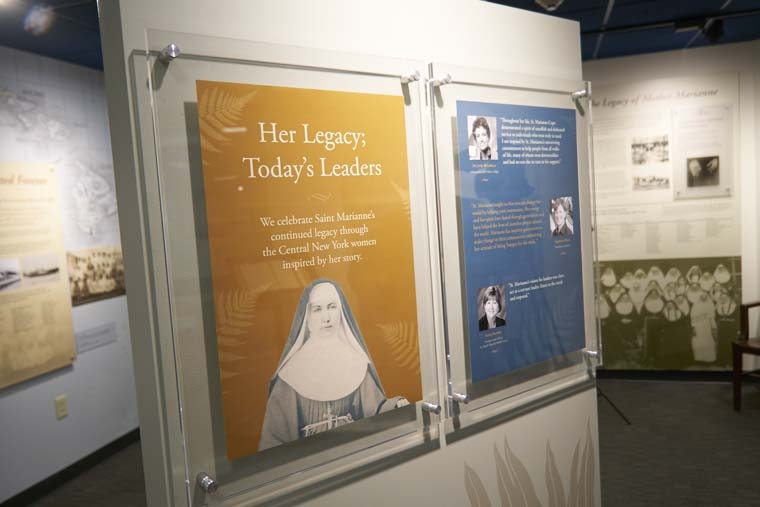 Celebrations for St. Marianne Cope’s feast day Jan. 23 suggest the story of the Franciscan who was born in the 19th century and who ministered to the sick in Hawaii for 35 years remains relevant, even in the modern age.

The day began with a flash prayer, in which people all over the world were invited to pray to St. Marianne at 7 a.m. Jan. 23, the time of her birth in Heppenheim, Germany, in 1838.

“You spread the word in the ways of the times,” said Rochelle Cassella, congregational director of communications for the Sisters of St. Francis of the Neumann Communities. “If it’s Facebook or Twitter, that’s how we do it. It’s a way to get the story of St. Marianne to a generation that would be glad to know her.”

A new display at the Saint Marianne Cope Shrine & Museum, “Inspired by Saint Marianne,” celebrates current female leaders in Central New York who describe how their lives have been enriched by the example of St. Marianne. The exhibit at 601 Townsend St., Syracuse, runs through March.

“I am inspired by St. Marianne’s unwavering commitment to help people from all walks of life, many of whom were downtrodden and had no one else to turn to,” LeMura’s quote reads.

“St. Marianne has inspired generations to make change in their communities, embodying the attitude of being ‘hungry for the work,’” Miner’s quote reads.

Mother Marianne was canonized a saint in October 2012. She was a native of Germany, grew up in Utica, and lived in Syracuse before moving with six other sisters to Hawaii in 1883. She died Aug. 18, 1918, in Kalaupapa, on the island of Molokai, where she had ministered to people with Hansen’s disease.

St. Marianne’s willingness to go to an unknown community to treat a disease about which little was known should be a model for all, Sister Roberta Smith, general minister of the Franciscans, said during a Mass at the shrine.

“Ask ourselves, ‘What is our response?’” Sister Roberta said. “She responded to a specific call at a specific time in history. She had the courage and strength to say yes when others said no.”

Mother Marianne “went, putting one foot on the path,” Sister Roberta said, adding that others can do the same. “The best we can do is put it in God’s hands and see how it unfolds,” she said.

Celebrations took place throughout the diocese and in Hawaii. The Franciscan Church of the Assumption parish, 812 N. Salina St., Syracuse prayed a Novena leading up to the feast day and held a Mass Jan. 23. Mother Marianne professed her vows as a Franciscan there.

And at Saint Francis School in Honolulu, students draped leis over a statue of St. Marianne and sang to honor her 177th birthday. The school was founded in 1924 in memory of Mother Marianne.

At the shrine in Syracuse, Friar Timothy Dore, a priest at Assumption, said Mother Marianne was called to cast out the “demons” of poverty, sickness and isolation where patients with Hansen’s disease were quarantined.

“Mother Marianne knew what it was to serve people in need,” he said. “Isn’t that what we’re called to do?”