On Jan. 16 a group of everyday people gathered in St. Vincent de Paul’s Church basement to brainstorm ideas in hopes of accomplishing extraordinary tasks to improve life in Sudan through medical clinics, schools and wells. A coalition was formed to share experiences, resources and dreams. 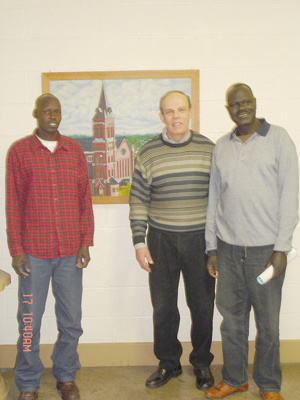 Carl Oropallo, coordinator of the Refugee Resettlement Program at the parish, and Paul Welch, parishioner and employee of Catholic Charities, assisted families, including Garang Daniel Amet and Angelo Ngong Kiir, two Sudanese “Lost Boys,” as they established residency in the community.

“We have about 200 Sudanese in our parish now,” Oropallo said. “There are about 700 Sudanese in Syracuse and 60 percent are Catholic.”

As more Sudanese settled and became members of St. Vincent’s Church, they spoke of the death rate in their village of Malek-elal and how many women died in childbirth, or how many deaths occurred from simple infections, bad drinking water, snake bites and poor hygienic procedures.

A committee was formed to build a clinic in the Sudan, named after Sudan’s patron saint: Josephine Bakhita.

Oropallo and Welch would oversee the project and fundraising. “The undertaking involved much more than we had anticipated,” Oropallo said. “We’re dealing with a country that had seen 22 years of civil war, in which its entire scant infrastructure was destroyed and millions of people displaced.”

He also cited difficulties with transferring money due to U.S. restrictions, fluctuating exchange rates, and an existing tribal hierarchy. To complicate matters, Oropallo also noted that the State Department designated the Sudan as a “terrorist country.”

Welch traveled to the proposed clinic site to determine the project’s feasibility. “James and Nancy Graham, members of St. James Episcopal Church in Skaneateles, were on the committee, offering their time, talents and planning skills,” he said. “Bishop Thomas Costello and Cindy Falise, former diocesan director of Catholic Charities, also supported the project. Holy Cross Church in DeWitt raised matching funds to enable us to construct two wells for the clinic, which are now operating.”

Welch began to work with Haviland Hawkins, a 17-year-old Skaneateles resident, who thought a walk-a-thon could raise a substantial amount of money to build wells in the Sudan. Two years ago, her brother, Berkeley, and Clement Kuek, a Lost Boy from Sudan, enlisted her in selling bracelets and promoting Sudanese projects at Manlius Pebble Hill (MPH), the high school she currently attends. “After I became really involved, attending meetings at St. Vincent De Paul Church whenever I could, getting to know the boys, I realized that I wanted to do more,” Hawkins said.

“I found that not many people at MPH even knew the Lost Boys were in Syracuse, not to mention what they accomplished just to be here, just to be alive,” she said.

Hawkins was inspired by all of the Lost Boy stories. “I felt it was my responsibility to support them, just as these boys pay forward their opportunity in the United States to help those left behind,” she said. “It was incredible that they stuck together like brothers, the older ones helping the younger.”

Hearing the Lost Boys’ stories emphasized how crucial her project was. Relatives of the boys died from drinking toxic water. “It made me sad since we have so much water we just throw away,” she began.

“We are worried about bottle return deposits and many people around the world and in Sudan can’t even get a drink,” she said. “Their stories make our problems seem so miniscule, putting life in perspective. They had to worry about whether they were going to live another day: dodging bullets, hiding from soldiers, becoming slaves, avoiding being eaten by crocodiles or hippos. Those are real problems.” Hawkins finds their hope inspiring.

“I try to get help and support for the Lost Boys by talking to everyone I know. Spreading the news by word of mouth has done wonders,” she said. It has become her calling to make the Lost Boys dreams come true so she talks about them to everyone.

She doesn’t want people to forget how many Lost Boys there are and the effort they are expending to give back to their homeland. She noted the frustration of some projects requiring so much effort, but reaping few benefits.

“I kept thinking of a way to help the boys and effectively unite all of them and have each of their projects noticed and raise funds individually, and still share in general proceeds,” she said.

When she initially proposed her walk-a-thon idea to the Lost Boys, she was inspired and motivated by their enthusiasm. They suggested walking arm-in-arm, symbolic of their survival trek across the Sudan seeking safety in the refugee camps. This reinforced the importance and significance of the walk, knowing she could really make a difference.

Hawkins decided to call the walk-a-thon, “Walk for Water and Wishes” because it more accurately encompassed their projects and hopes to make their villages better.

It was Hawkins’ idea to make the walk a gigantic event to increase awareness to the crisis in Sudan and the pending Independence Referendum, which will determine whether Southern Sudan will remain a part of Sudan or not.

She hopes to accomplish a lot more than just raising a few dollars for a good cause. She plans to showcase Sudanese culture, celebrate what they’ve already accomplished, and draw attention to each of their individual projects. “Even though I knew this task would be difficult to begin with, I believe that in the end it will all be worth the effort. I needed to do this for the boys,” she said.

A while back she took a course that taught her how to mobilize communities to accomplish fundraising projects and use technology to support fundraising. She will implement those skills now.

“Kids my age are so busy that sometimes they don’t make room for community service in between sports and activities,” she said. “It is something that I have always found valuable and know that I have to make room for it in my life.”

Hawkins said, “The ‘Walk for Water and Wishes’ unifies everyone together for a fundraising event where people can donate to individual projects or the whole general fund. The money is divided equally between all of the Lost Boys’ individual projects approved by Catholic Charities and St. Vincent de Paul Church.”

Hawkins envisions the event, which will be held at Green Lakes State Park, as resembling a carnival with music, Sudanese crafts, dancing and demonstrations in the “great room” building at the park. She imagines the walkway lined with displays for individual projects. She is banking on Margot Grobsmith’s exhibit being there.

Grobsmith assists the Sacred Heart Sisters (an indigenous Catholic religious community) in restoring spiritual health and advising native educators. On her most recent trip to the Sudan, she was given a supply of necklaces and bracelets made by girls, women and boys released from armies where they had been enslaved. to either service practical, sexual or military assaults. She will offer an assortment of delicate jewelry made from shreds of paper wound into small beads and strung together to make a necklace.
The circles are symbols of our interconnectedness with our world community.

Hawkins also wants a huge map with photos and stories about the boys on display. She is devoted to making this event a success. She feels it is everyone’s responsibility to give back and no one should squander their good fortune.

She said, “We need to share it with the world and make it a better place one person, and one step, at a time. Having been raised with the motto ‘A productive life is a happy life,’ I have taken it to heart. If you are thinking and doing for others you find real happiness — happiness isn’t in a purchase, it is helping others.”

The walk is scheduled for June 20 from 11 a.m. until 7 p.m. Hawkins noted that if someone can’t walk or volunteer, people can send money to Catholic Charities or St. Vincent de Paul Church c/o Walk for Water and Wishes.

She offers this challenge to everyone: dare to make a difference for others. For more information on the event, visit
www.walkforwaterandwishes.com.