It takes a lot to get a Thanksgiving dinner on the table. There’s the 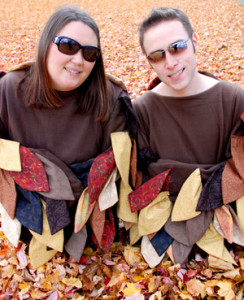 shopping, chopping, roasting and baking. Then there’s the setting, the seating, the washing and wiping.

But at least it’s not a week spent camped out in a parking lot and wearing a turkey suit.

Each year, two DJs from the Morning Show on Star 105.7 FM spend a week in a camper to accept donations of food for the “Thanks 4 Giving” Food Drive. The food will go to Catholic Charities of Broome County to help provide Thanksgiving dinners for families in need.

From 5 a.m. on Friday, Nov. 13 until midnight on Friday, Nov. 20, Joshua B and Lori, the DJs for the Morning Show will camp out in the parking lot of the Super Wal-Mart in Vestal.

“It’s not pretty at the end of the week, let me tell you,” said Marsha Maroney, development officer at Catholic Charities of Broome County. But the food drive has become a tradition in the area. “Nobody here can exactly remember when it started,” she said.

Joshua B and Lori (who do not provide their full names) try to draw in donations by incorporating new events each year. There was a week-long concert series in front of the camper two years ago and a viral video and online blog with the Binghamton Senators hockey team last year.

This year, they are planning a touch-football game using a frozen turkey instead of a football. Joshua B and Lori, dressed in elaborate handmade turkey costumes complete with headpieces and multi-colored feathers, will act as the referees.

“These are all sort of creative ways of getting people to come out and give what they can,” Joshua B said. “We just try to make sure that every family in the Southern Tier has as happy and fulfilling a Thanksgiving as those of us who can afford to give it to ourselves.”

The drive is looking for donations of non-perishable food items like boxed mashed potatoes, canned yams and boxed stuffing. A donated freezer truck is parked nearby, and turkeys that are donated are tossed into the truck to be stored.

Over the days, the camper becomes filled with food, and trucks come three or four times, Maroney said, to empty the camper and bring the food to be divided into baskets. Families sign up for baskets ahead of time, and the baskets will be distributed on the morning of Saturday, Nov. 21.

And now more than ever, every bit of food is needed.
“This year, our numbers are up significantly — as we expected,” Maroney said.

While figures for donated baskets have been rising steadily over the last few years, this year has drawn the largest number of families ever. Maroney said approximately 2,700 families will need to receive baskets. “We were afraid of this,” she said. And she said she expects to hear from many more who will have missed the sign-up deadline for various reasons.

Catholic Charities of Broome County also provides turkeys for organizations like the Endwell Rotary Club, the Salvation Army, and several churches and community food pantries. “Last year, in addition to the baskets we also gave out over 700 turkeys,” Maroney said.

Joanne Aloi, market manager for the Binghamton cluster of Clear Channel Radio stations, said that last year’s “Thanks 4 Giving” food drive brought in over 1,900 turkeys, either through donations of money or the turkeys themselves. “Marsha told us that last year, between Thanksgiving and Christmas there was nobody that they could not take care of,” Aloi said.

But she said the radio station relies on help from other area businesses, like the freezer truck donated by Willow Run Foods, the camper donated by Hillcrest R.V. and the continuing help of the Wal-Mart.

Joshua B and Lori said they enjoy the sense of community they get from meeting listeners and seeing people contribute what they can. People help carry turkeys to the freezer and stay to watch a movie or play a few video games with the DJs in the camper.

“It’s like everybody’s on one big team together,” Lori said.

She said people shouldn’t feel the need to give more than they can afford. Even a dollar bill or a box of stuffing will help. “It’s not even about bringing a lot of items,” Lori said. “It’s really about coming down and taking part.”

A running count of this year’s turkey donations — complete with a gobble after each donation — is available online at www.turkeytally.com. For more information on the schedule of events for the “Thanks 4 Giving” food drive, listen to 105.7 FM or visit their website at www.star1057fm.com.