The Vigil Project: Music is the mission 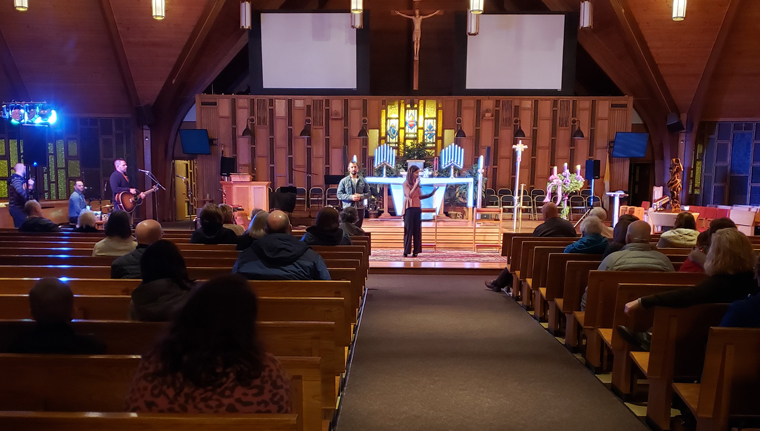 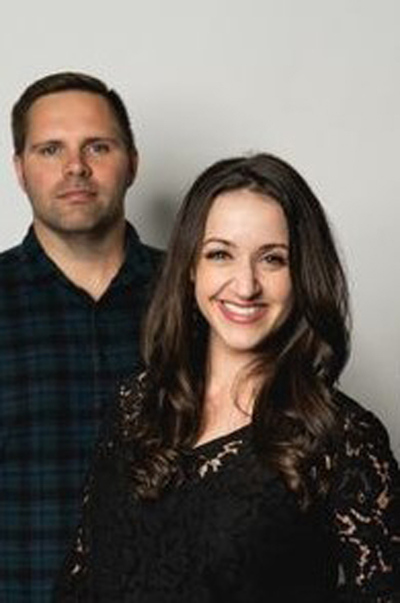 The sanctuary of Sacred Heart Church is filled with the expectant musical themes of Advent, but it is not the typical Sunday liturgy and not the typical music one might expect to experience at the Cicero church. That is part of the grace and excitement generated by The Vigil Project, a live experience of music, proclamation and Eucharistic adoration that performed at the church earlier this month.

With just a few hours before members of the traveling troupe were to begin their presentation, co-directors Andrea Thomas and Greg Boudreaux took a break from rehearsals to talk about the Project and its mission.

“It’s pretty simple; we make music for the Catholic Church,” Boudreaux said, adding that  “the goal as musicians and artists is to make excellent music for every season of the Catholic life and prayer.”

Both Boudreaux and Thomas perform as musical artists and speakers in addition to their duties as co-directors for the not-for-profit organization. While the Project tours and performs year-round, the group focuses its time on the road during Advent, Lent and the Easter season visiting parishes around the country on its mission of spreading the Gospel and helping music ministries to thrive.

“Instead of rolling into the parking lot of a conference center or an arena, this is where we want to be,” explains Boudreaux about their love for bringing music to the parishes. While there is a significant amount of Christian music available today through many platforms, The Vigil Project experience is uniquely Catholic.

Thomas adds that the group is “passionate and feel(s) very called to bring a very high level of effort and a high caliber of artistry and beauty to parishes. … We really felt compelled, like the Lord was inviting us.”

The Vigil Project has been providing a musical experience and more since 2016, but the artists involved have been performing long before that. “We are all musicians and were primarily serving in Catholic ministry. … It was about six years ago that we all had this idea like ‘Hey, what if we made a project together instead of us going in different directions?’” according to Boudreaux.

What started as a one-time project for Lent and Easter has grown thanks to the initial overwhelming response to their musical efforts. The group quickly realized that this was more than just offering liturgical music, it was a call for more involved ministry.

Thomas explains that their original effort “has become a pillar of what we do. … That first album was embracing collaboration. … We created something really bigger and more than anything we could have done as individuals. That pillar remains a big piece of what we do.”

What they do is a three-fold ministry, the first being the creative musical experience they offer to parishes.

“The second one is outreach … to proclaim the Gospel through music as a medium, and the third one is for musician resources,” explains Boudreaux. “As younger musicians it was clear to us that we had a gift and felt called to use it to serve the Church. We have experienced friends and acquaintances who have felt a similar call as Catholics, but now they are not, they have taken their gifts elsewhere. There is no culpability there … but it seems that maybe there is a struggle right now to foster or disciple the talent that we have in the Catholic Church.”

When asked about the demographics of their target audience, the pair couldn’t help but laugh, Thomas exclaiming that “everyone asks us that!”

Boudreaux responds, though, that “we have had some ‘experts,’ so to speak, try to help us with our branding and marketing. They really tried to squish us into just this one demographic, and we were like ‘No!’ We want to serve whoever walks in the door of the church. … Then we have accomplished the mission that God has given us.”

The pair is very quick to add that there is more at stake than just music. It helps Catholics with their manner of living their faith.

“I’m not saying out with the old, in with the new. What we are not saying is that every church should have guitars and drums and modern instruments and that they should push out everything else,” according to Boudreaux. “Quite the opposite; we recognize and value our Catholic faith, our Catholic heritage, our Catholic tradition. What we recognize is that there is a place for a lot more music in the Church that perhaps we have given space for. There is more room within the liturgy, for adoration and divine prayer. There is music for your drive home. … For different moments we have this music that is God’s gift to us.”

Both Thomas and Boudreaux express a belief that their journey is just beginning. What they offer on their music tour is augmented by their online resources.

Thomas sums it up: “There are musicians who really just need to be told that they belong here and there is a place here for you … and this is beautiful and good. It’s the movement of the Holy Spirit. … Sometimes they just need encouragement. We are not here to just entertain, we are here to create space for God’s music.”

Editor’s note: You can learn more about this group at thevigilproject.com.