‘This is the day the Lord has made’ 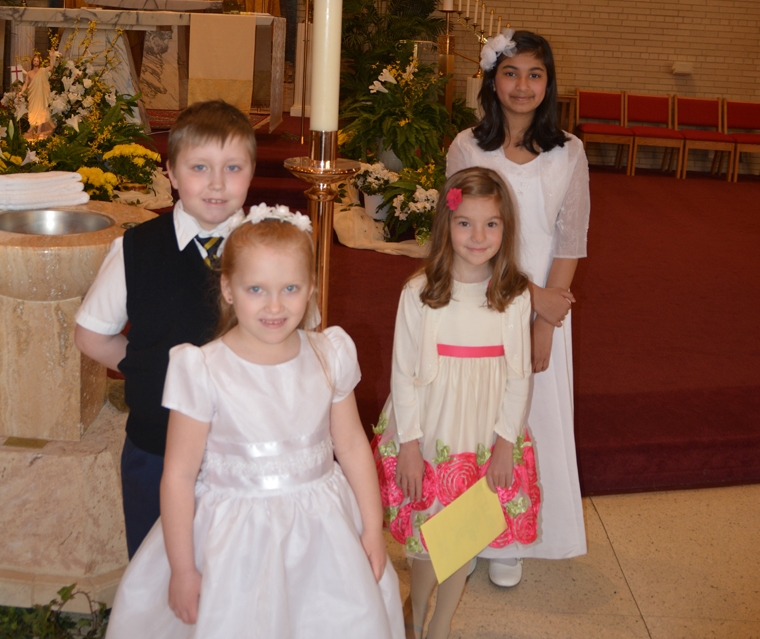 UTICA — The first of May is a celebration of firsts. First spring flowers, first buds on the trees and the first day of an entire month devoted to the Blessed Mother. It was also a day of sacramental firsts for four Notre Dame Elementary students, too. Three children were baptized and one received her first Holy Eucharist as part of the school’s sacramental program.

“What a wonderful, wonderful way to start the month of May,” said Principal Mary Rossi.

Maryann Buck, second grade teacher as well as the teacher for the program, said the sacramental program began eight years ago.

“It started with one of my students who needed to repeat second grade,” she said. “His parents asked me to speak to him. He agreed with me that he needed to repeat the year. But, he said there were two things he wanted: for me to be his teacher again and to be baptized. When I asked him why, he said ‘because I want to be a child of God.’ It melted my heart,” she said.

She said the following September on orientation day, the boy tugged on her shirt to remind her of his wish to be baptized. Together with Father Joseph Salerno, pastor at Our Lady of Lourdes Church, and the child’s parents, they made that wish come true. On the day of his baptism, the boy wore a little suit and had a bouquet of flowers in his hands and told Buck, “I have been waiting for this day all my life.”

After Mass, other parents, who for whatever reason had not had their children baptized, asked the school principal if their children could receive the sacrament. The following year, a total of seven children from three families were baptized.

“It started with a little boy and his dream and it has flourished into an entire program,” Buck commented.

Buck has been teaching for 40 years, 37 of those years in the Utica-area’s Catholic elementary schools. She said her mother provided her with a strong faith as a young girl and credits her for sharing the ability to introduce faith in her classrooms and with those who are new to Catholicism. Now, she said, “the children’s ideas and motivation keep me going. They always wow me.”

Catholic schools are a natural backdrop for receiving sacraments. “The kids want this. We teach religion every day and they want this piece of God. It just works,” Buck said. The excitement is infectious in the entire school community and most especially in second grade. She added, “They came in here singing, ‘This is the day the Lord has made.’”

Rossi addressed the school community at the May Day Mass that was organized by the kindergarten class. “This gives us a chance to think about our own baptisms because most of us were too small to remember it,” she said. Some of the tiniest students, kindergarteners, climbed wooden steps to the lectern to provide readings in halting but articulate words, including the poem “Spring Prayer” by Ralph Waldo Emerson.

In his homily, Father Salerno explained baptism to the children. He asked, “If I had a plant in a pot right here, what would I have to do to help it grow?” Hands darted up throughout the pews and he pointed to one child. “Water it,” the student said. “That’s right,” Father Salerno said, “because without water, we don’t grow. Water sustains our lives and helps us to live and grow. We’re going to pour water over Sean, Alyssa and Emma and ask God to help them grow in love with Jesus.”

After the baptism and with droplets still visible in his hair, Sean stepped carefully down the wooden steps from the baptismal font, and said, “Thank you, Father.” It was an appropriate reminder that May is a time to welcome new beginnings — and to be thankful for these gifts.