What a Difference a Knight Makes 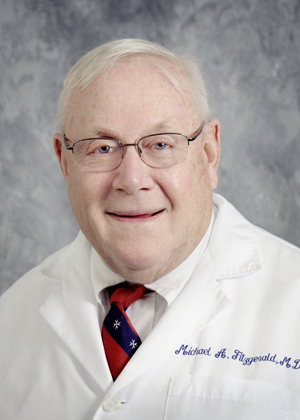 This week, Dr. Michael FitzGerald, a parishioner of St. Mary of the Lake in Skaneateles, will travel to California to be recognized as the Catholic Doctor of the Year and be presented with the World of Difference Award by the Mission Doctors Association.

But that’s not something he really likes to talk about.

“It’s embarrassing. I could tell you 20 people I work with who do more than I do,” FitzGerald said.

Since 2005 he’s traveled four times to the Hopital Sacre-Couer in Milot, Haiti, with a group of other American doctors.  He plans to go again this February.

“We sort of go on rounds with the residents and teach them on rounds,” FitzGerald said. “Probably the only thing I do that [the other doctors] don’t do is I try to teach people certain techniques. But it’s a lot easier to bring them up here, so I do that,” FitzGerald said.

FitzGerald arranges for doctors to fly from Haiti and stay in his home. He gets them temporary privileges at Community General and St. Joseph’s Hospitals so that he can show them how to use equipment here. He also brings equipment and medicine to Haiti to be used there.

“Their technology is back in the 1940s,” FitzGerald said. “The only x-ray you can get is a chest x-ray or if you’ve broken a leg or something like that. No CAT scans, no upper-G.I.s.”

FitzGerald said that Haiti’s poverty has led doctors there to be able to quickly diagnose symptoms of infectious diseases that the visiting doctors from America may be much less familiar with.

“Haitian doctors are very good, and what they see is not what we see in this country,” FitzGerald said. “I don’t see tuberculosis and I don’t see AIDS. There it’s rampant. The great lesson for American doctors is that they do very well with minimum technology,” he said.

This poverty can make even traveling to the hospital he volunteers in an ordeal. The major city in the north of Haiti is called Cap-Haïtien. “Milot is probably 10 miles from Cap-Haïtien, but it takes an hour to travel those 10 miles,” FitzGerald said.

Yet despite this overwhelming poverty, FitzGerald said the Haitian people are filled with pride. Children who live in dirt-floor homes walk to school in impeccably neat Catholic school uniforms. People who visit the hospital come dressed in their best clothes.

But this presents a problem for those without access to nice clothes. FitzGerald said these people often simply won’t come to be treated. To remedy this, he said one of the nuns in the area drives into the countryside to seek these people out and provide them with clothing so they will be seen in the hospital.

Another unique problem concerns those with diabetes. FitzGerald said these patients get a month’s worth of insulin at a time, and then they must buy ice every day to keep the insulin refrigerated. FitzGerald’s wife, Margaret, travels with him to work in the diabetes clinic there.

FitzGerald said he never used to do any volunteer work until a neighbor got him interested in becoming a Knight of Malta. But now he can regale listeners with the history of the battles won and lost by the Knights centuries ago and their continuing mission to care for the poor and the sick. Hopital Sacre-Couer in Haiti is one of the hospitals run by the Knights of Malta.

The Knights also help the sick or disabled make pilgrimages to Lourdes. After he became a Knight, his wife became a Dame of Malta. Together, the couple travels to Lourdes each year to help those in need. Two of FitzGerald’s five children, Megan and Maura, have also gone along on the trips to Lourdes.

FitzGerald doesn’t worry much about conflicts between medicine and miracles. Though he said he hasn’t seen any miracles, he has seen the sense of calm and community that people visiting Lourdes share. “One of my friends who goes down says people who have a terminal illness, when they go there, there’s this sense of peace there.” It’s a peace he said he’s seen as well.

FitzGerald also used his connection to the Knights of Malta to help the Poverello Clinic that serves those without insurance on Syracuse’s north side. Sister James Peter Ridgeo, OSF, said FitzGerald and another doctor who volunteers at the clinic, Paul Fallon, have arranged for the clinic to receive donations of medication through the Knights of Malta.

“When I heard about him getting the award, I congratulated him and said, ‘Hey, that’s great Dr. FitzGerald!’ and he said, ‘Oh, I don’t know why I got this,’” Sister James Peter said. “But he’s certainly deserving of this award because he’s a very kind and humble man.”

The World of Difference Award will be presented by the Mission Doctors Association in South Pasadena, Calif. on Oct. 18. The association is dedicated to recruiting, training, sending and supporting Catholic doctors to mission hospitals and clinics around the world. The award honors a doctor who has responded to Christ’s call to heal the sick.

FitzGerald was nominated for the award by Kathryn Ruscitto, a senior vice president at St. Joseph’s Hospital. Ruscitto is also a Dame of Malta. “All of us have watched him over the years live out his faith. I can’t think of anyone more deserving,” she said. “I think he finds this very uncomfortable, but he’s a role-model for young physicians, and I hope knowing this makes it a little less uncomfortable for him.”

Laureen Ascenzo has worked with FitzGerald in his gastroenterology practice since 1975. He started the practice with one physician and one employee, but the practice has since grown to include seven physicians, one nurse practitioner and 30 staff members with four office locations.

She said FitzGerald is quick to laugh and likes to play jokes on people, especially on the partner in his practice, Dr. James Tifft. “He gets such a kick out of his own jokes,” Ascenzo said.