A model for the country 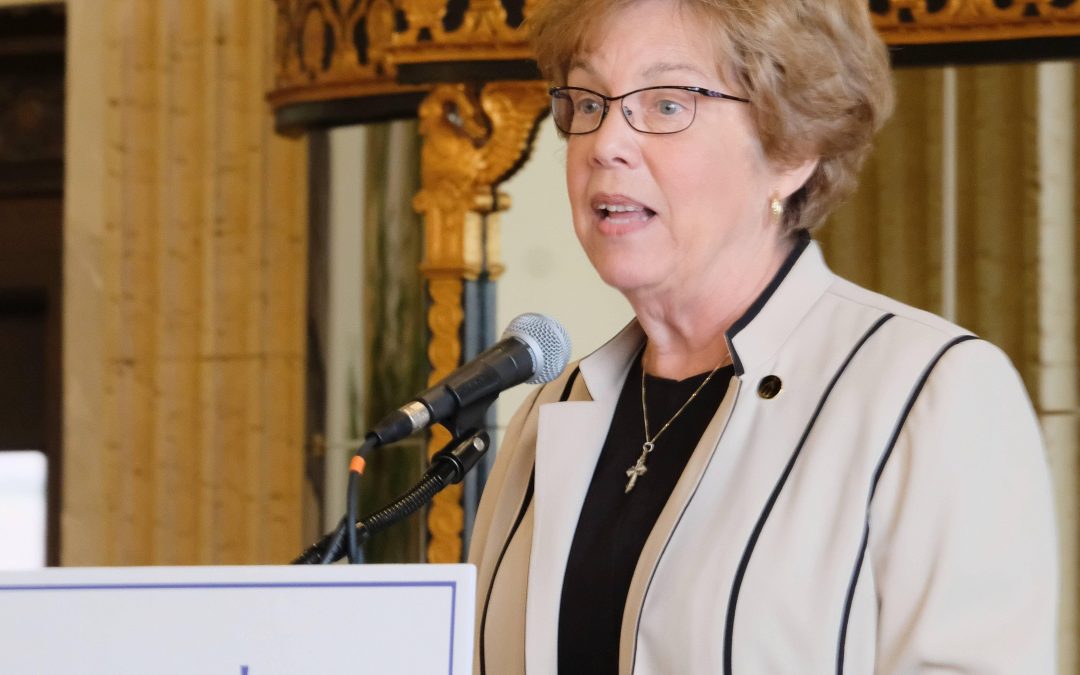 Sister Donna, who has been in the job for about 18 months, said she is particularly impressed by the diocesan agencies’  behavioral-health services. “I’m a clinical psychologist by background,” she said, “so of course my whole life has been involved in trying to assist people in claiming their full personhood and dignity.”

“This agency,” she said of Catholic Charities, “is at the forefront of what ought to be happening with the delivery of mental-health care, and I’m very impressed by it. … It is right on track with the cutting edge of contemporary behavioral-health-care delivery.”

Joseph G. Slavik, CEO and president of Catholic Charities of the Diocese of Syracuse, welcomed Sister Donna for a two-day visit to Syracuse, including a visit to the men’s shelter operated by Onondaga County Catholic Charities. Slavik said service to chronically mentally ill people has gone from case management to integrated care.

She gave this example:

In the old model, an adult who is chronically, persistently mentally ill is living on the streets. That person is cold, or has frostbite, or is high on drugs or alcohol. The person, who has a good chance of being uninsured, gets picked up by the police and is taken to the emergency room of a hospital.

The hospital cares for that person, whether it just involves providing a place to sleep off the effect of the alcohol or drugs, or providing primary care of medicine. The emergency room is very expensive, costing between $600 and $900 for a visit.That model has been going on across the country.

In the new model, Catholic Charities sets up services so that the chronically mentally ill person has a primary-care provider, has access to behavorial-health services in the community, and has access to food. The intent is to move the person into some form of shelter that might offer job training.

Then, if the person needs medical care, clinics are designated to provide care so that the person does not have to receive primary care at an emergency room.

“So immediately, you’ve saved that person’s life,” Sister Donna said, “and you saved the state an enormous amount of money.”

Asked if the new model has been instituted yet, Sister Donna said, “Oh, sure, it’s happening all over the country. But it’s very new, and only people that are on the cutting edge are moving forward.”

Slavik’s agency knows how to implement the program, she said, “and I think it will be an example for the country.”

The other local Catholic Charities agencies in the diocese also offer mental-health services among their many programs.

A huge challenge in Onondaga County, Slavik said, is service to refugees.

“Every year they resettle about 600 to 650 refugees coming into this country from all nations,” Slavik said, “not just the Middle East.”

“We will help any person … having been vetted by our government to enter our country,” Sister Donna said. “If that person needs help or that family needs help, Catholic Charities stands ready to help them.

“And we will refuse no one who comes to our door. That includes people that come from the Middle East. And even though some of our critics have said we should not be helping them, Catholic Charities will stand firm in our resolve to help anyone who comes to us.”

The Catholic Church in America, Slavik said, “has been really at the forefront of immigration.”

Last year, Sister Donna said, the U.S. received 70,000 refugees. One-third of them were resettled by Catholic Charities, she said.

Asked if she is proud of that, she said, “I’m very proud of it. That’s something that the Church ought to be extraordinarily proud of, and that we as Catholic Charities should be very proud of.”

Slavik said there does not seem to be a national outcry against poverty in this country.

Asked to explain that, Sister Donna said, “Well, we’re in an election cycle. It’s not popular. And there isn’t an outcry. The focus has been on the middle class, because that’s where I think the politicians see their greatest input.

“But nonetheless, with Catholic Charities, we have to keep being the conscience to our legislators, to being the conscience providing that voice of people that are really, really struggling at the bottom, and talking to them about what they need to be doing as a moral obligation to tend to the least among us.”

Helping to serve as the conscience for Catholic Charities nationally are about 55,000 employees and about 220,000 volunteers. The spring 2016 edition of Catholic Charities USA’s magazine ran the obituary of one of its fine workers, Brother Joseph Herbert Berg, C.S.C. The obituary quotes the eulogist as saying, “Canonization will not happen but perhaps sainthood already has.”

Asked how she recruits people like Brother Berg, Sister Donna said, “They’re recruited all over the country by the diocesan leaders. Our bishops recruit them locally; I get to do some of that at the national level for our office.

“But I think the important thing to look at there is that, when a man or a woman makes a choice to dedicate their entire career in service to people who are suffering, they are extraordinary people.”

So the idea, she said, is not just to stick to the Catholic Charities program.

“Stick to the Gospel,” she said.