Another pandemic side effect: Some priest reassignments delayed 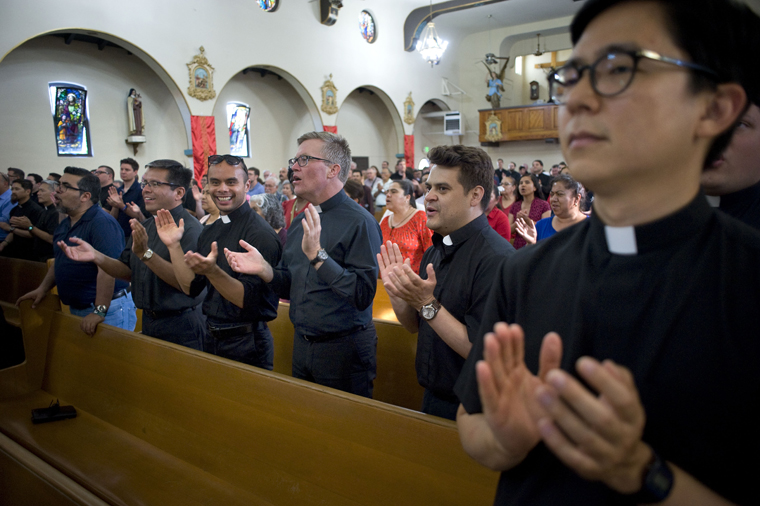 WASHINGTON (CNS) — Big-time college athletics has something called a transfer portal, a window of time during which athletes on scholarship can switch schools.

The Catholic Church in the United States has its own transfer portal: the annual priest-reassignment cycle. While each diocese operates its own schedule, the vast majority of transfers occur in June and July.

For some dioceses, though, transfer season is a bit like baseball season: delayed, but with a possible start date in mind. It’s just another side effect of the coronavirus.

“Here in the Archdiocese of Chicago we usually begin priests’ new assignments on July 1 of every year. This year we are postponing most of the moves until August or September,” said Father Michael Knotek, vicar for priests in the archdiocese, in a May 4 email to Catholic News Service.

“However, there are some assignments which will begin on July 1 because the move is not dependent on another priest’s placement such as when two or three parishes are merging or because the priests are going into specialized nonparochial ministries,” Father Knotek added. “Also, some of the priests who were scheduled to retire on July 1 will be allowed to do so.”

“There’s a number of different levels to it,” said Auxiliary Bishop Edmund J. Whalen of New York, the archdiocesan vicar for clergy, in a May 4 phone interview with CNS. “The normal date is July. You don’t want pastors to leave without a chance to say goodbye first.”

He added: “We’re looking toward September for a changes date … but that’s still fluid. Because we don’t know what’s going to happen in September.”

Bishop Whalen said the archdiocese may stagger transfers. They could take place later for the densely populated New York City boroughs of Manhattan, Staten Island and the Bronx, but earlier for counties in upstate New York that are also part of the archdiocese.

Whatever plan is chosen, he said, the archdiocese is getting off easy as it has only about 10 transfers for its 283 parishes. Under the framework of an expensive parish reorganization plan six years ago, priests assigned to newly consolidated parishes were given the title “administrator” for one year, then made pastors in 2015. Given the six-year cycle for assignments, far more transfers will be in the offing for 2021, Bishop Whalen said.

However, in the Archdiocese of Atlanta, plans are on course to reassign priests effective the customary date of July 1, according to Auxiliary Bishop Bernard E. Shlesinger, director of priest personnel, and not because Georgia Gov. Brian Kemp became one of the first governors to allow a partial reopening of a state effective May 1.

July 1 represents the start of a new fiscal year for the archdiocese, Bishop Shlesinger told CNS. “We also have to move on several assignments,” including campus ministry, ordinations and retirements, he added. “If we get back to schools, the pastors use July 1 for ramping up with the principals on the new school year. It’s best to make changes in the summer rather than midstream.”

However, he acknowledges, “priests would say that July 1 is not a good date because of all of the first Communions, the confirmations, the baptisms have been put on hold.”

He said new pastors would have to work out with the previous pastors about when to celebrate these sacraments, but when some pastors leave a parish they might just say: “I have to get my head around a new assignment.'”

The Diocese of Charlotte, North Carolina, plans to reassign priests on their current schedule, according to diocesan communications director Patricia Guilfoyle.

In the Diocese of Wichita, Kansas, assignments are being delayed two weeks: June 16 rather than June 2, Matthew Vainer, communications director, told CNS May 6. “We give the priests about two weeks in between to get everything situated and moved around,” he said.

“Our normal plans of priest assignments are on schedule at this time,” said Paula Grant, secretary of communications for the Archdiocese of Washington in a May 5 email to CNS. “Any potential change will be evaluated based upon future guidelines from the local government jurisdictions.”

Across the Potomac River in the Diocese of Arlington, Virginia, the situation is still uncertain. A representative of the diocese’s Vicar for Clergy Office said no decision has yet been made, depending in part on what Virginia Gov. Ralph Northam does. On May 4, Northam, a doctor, extended the state’s shelter-in-place order to May 14, leaving open the possibility of loosening some restrictions May 15. Also key to the diocese is whether priestly ordinations can be performed on time.