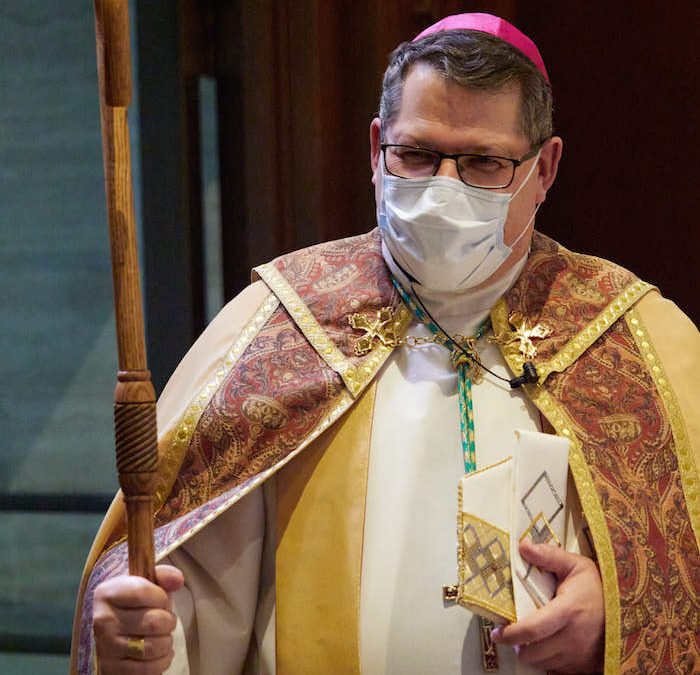 Bishop Douglas J. Lucia wears a face mask as he prepares to celebrate a Holy Hour at the Cathedral of the Immaculate Conception May 3. (Sun photo | Chuck Wainwright)

After more than two months of stay-at-home orders in New York state, Bishop Douglas J. Lucia may allow public Masses to resume May 31, Pentecost. The tentative plan comes as most state regions begin reopening amid declining cases of COVID-19.

Pentecost would be a fitting day to resume public worship. Celebrated 50 days after Easter, Pentecost commemorates the Holy Spirit’s descent upon the Apostles and other followers of Jesus Christ while in Jerusalem celebrating the Feast of Weeks. “When the time for Pentecost was fulfilled, they were all in one place together,” reads a passage from the Acts of the Apostles. After driving wind and tongues of fire, “they were all filled with the holy Spirit and began to speak in different tongues, as the Spirit enabled them to proclaim” (Acts 2:1–31).

Bishop Lucia communicated the possible date for resuming public Masses in an email to diocesan staff May 20. Additional guidance from civic officials will determine if Masses will be celebrated outdoors only or inside churches as well, the bishop wrote. He is expected to release further details by early next week.

State officials have created an Interfaith Advisory Council — including New York Cardinal Timothy Dolan and Albany Bishop Edward Scharfenberger — to “discuss proposals to safely bring back religious services,” according to materials from the briefing.

Bishop Lucia has said he is eager to resume public worship and said numerous diocesan faithful have encouraged him to do so. But he has stressed that resuming Masses and parish events will require restrictions and prioritize safety.

Public Masses in the seven-county diocese have been suspended since March 16, all 22 diocesan Catholic schools were closed by March 18, and New York has been under stay-at-home orders since March 22 as the coronavirus pandemic spread.

Phase 1 of 4 in the state’s reopening began May 15 after regions met the state’s benchmarks, including a declining number of COVID hospitalizations and enough testing for officials to monitor spread of the disease. Industries included in Phase 1 include construction, manufacturing, and retail (curbside or in-store pickup or drop off). If infections, hospitalizations, and deaths from COVID-19 continue to decline, additional sectors could reopen in Phase 2 beginning May 30. Restrictions including reduced occupancy and safety measures.

Houses of worship are not listed in any of the state’s four reopening phases, but state and local officials said they could reopen in Phase 4, expected to begin in late June. That phase includes arts, entertainment, and recreation; and education.

On behalf of the state’s eight bishops, Dennis Poust, communications director for the New York State Catholic Conference, has advocated for dialogue between religious leaders and government officials on how to reopen churches safely before Phase 4.

“When we’re beginning to open retail stores and barbershops and salons and things where people do gather and congregate and yet religious services are after restaurants, you start to say this is a bit of a problem,” Poust said May 21 on the WCNY radio show Capitol Pressroom. “We (churches) can do this as well as anybody. We can social distance as well as they can on the beach.”

Other religious groups are looking toward resuming services as well. The Episcopal Diocese of Central New York, for example, “will return to in-person gatherings and re-open our buildings for use more slowly and cautiously than required by the government.” When services do resume, no Eucharist will be distributed, singing will be prohibited, and no offering plate passed, according to the diocese’s website.

Some Catholic dioceses across the United States have resumed public Masses in recent weeks. But the vast majority of Americans remain wary of returning to normal activities. A May AP-NORC poll found that 54% of Americans say local restrictions are about right to prevent spread the coronavirus, which causes COVID-19. That’s down from 61% in April. The poll also found that 18% think restrictions go too far and 27% say they don’t go far enough.

Minnesota’s Roman Catholic bishops said Wednesday that they will allow Masses to resume next week despite Gov. Tim Walz’s prohibition on most religious gatherings. The state’s Evangelical Lutheran Church in America also plans to reopen, according to news reports.

In the Archdiocese of Boston, Vicar General Bishop Peter Uglietto said that despite the state’s May 18 expiration of an order closing non-essential businesses, “it will likely be several more weeks before we can begin to implement our own phased-in plans to resume public Masses.”

The church had been following social distancing and cleaning protocols, and about 175 people had attended services in the 900-seat building since reopening, the archdiocese said in a statement. Attendees were “strongly encouraged to monitor your health for any symptoms and be tested for COVID-19.”

In the Diocese of Syracuse, a task force has been working since early May to develop guidelines for resuming public Masses. Final protocols are expected to be released by early next week. The protocols will include general principles all parishes must follow, such as rules on social distancing and hygiene, followed by sacrament-by-sacrament breakdowns that include “some mandates, some recommendations, and some reminders,” according to Father Christopher Seibt, director of the Office of Liturgy and a member of the task force.

“I understand their desire to get back to religious ceremonies as soon as possible. As a former altar boy, I get it,” Cuomo said May 20. “At this time of stress and when people are so anxious and so confused, I think those religious ceremonies can be very comforting. But we need to find out how to do it and do it safely and do it smartly.”