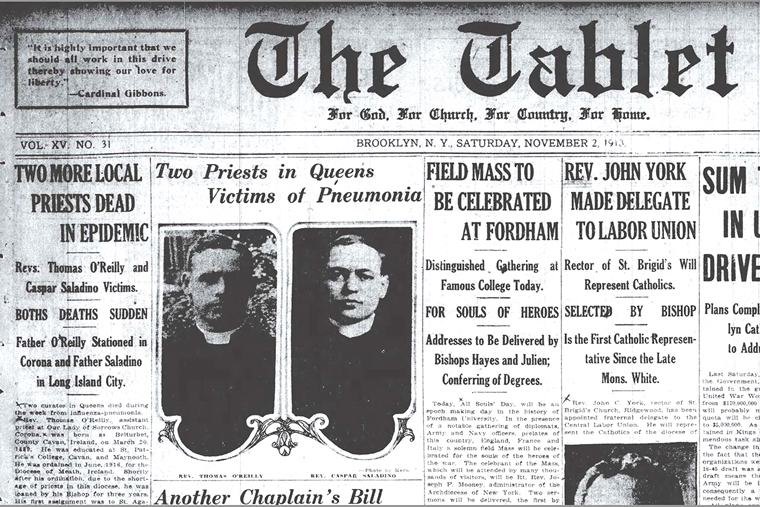 BROOKLYN, N.Y. (CNS) — When Archbishop Gregory M. Aymond of New Orleans announced March 23 that he had tested positive with the novel coronavirus, it was not the first time the Archdiocese of New Orleans has been affected by a pandemic.

The Tablet, newspaper of the Diocese of Brooklyn, reported in its Nov. 2, 1918, edition that a triple episcopal ceremony had to be postponed because one of the newly appointed bishops was ill with the Spanish flu.

Bishop-designate Arthur J. Drossaerds had been appointed bishop of San Antonio in July 1918 and was to have his episcopal ordination at St. Louis Cathedral in New Orleans. But the ceremony was delayed until December after he fully recovered. He served in San Antonio until his death in 1940.

Also affected at the time were the new Archbishop John W. Shaw of San Antonio, who had been appointed to New Orleans Jan. 25, 1918, and Bishop-elect Jules B. Jeanmard, who was named the first bishop of Lafayette, Louisiana, July 18, 1918.

The Tablet also reported that the Brooklyn Diocese, which at that time included all of Long Island, was hard hit by the Spanish flu.

The front page of that Nov. 2 issue carried the headline, “Two More Local Priests Dead in Epidemic.” he story announced the deaths of Father Thomas O’Reilly, 27, an associate pastor at Our Lady of Sorrows Parish in Corona, and Father Caspar Saladino, who was serving at St. Mary Parish in Long Island City.

Father O’Reilly was born, educated and ordained in Ireland and came to the diocese in 1916, being assigned to St. Agatha Parish in Brooklyn’s Sunset Park neighborhood. Shortly before his death, he developed pneumonia and was hospitalized. He died while being treated.

Father Saladino was a native of Sicily who arrived in Brooklyn as a young boy. He was ordained in 1912 and is buried in the priests’ plot in St. John’s Cemetery in the Middle Village neighborhood of the borough of Queens.

The story said that “despite the fact that the hospitals were working under crippled conditions, due to the medical war services, the days of the ‘Spanish Influenza’ found them ready, anxious and willing to receive the greatest number of patients.”

The piece reports that 1,463 patients were treated in local Catholic hospitals for the Spanish flu. Of those, 368 came from the military; the others were brought by local ambulance.

The Oct. 19, 1918, edition of The Tablet reported that two Vincentian priests who taught at St. John’s College in Brooklyn had died of pneumonia after short illnesses. Vincentian Fathers John Carmen, 40, and Joseph Dougherty, 27, were buried in a joint funeral service attended by Bishop Charles E. McDonnell.

While not all churches were mandated to close back then, there were some restrictions enacted in local ordinances. The Catholic Pulse by Valerian was a popular front-page feature of the Tablet at the time. In the Oct. 26, 1918, Catholic Pulse, Valerian, a pen name, had noted: “The call of the epidemic has made life strenuous for the local doctors. Everywhere they are running from house to house, endangering their own health to bring relief to others.”

On Nov. 9, 1918, Valerian, explained, “Even healthy Long Island has felt the severity of the flu. Local Health Boards have advised caution to the point of closing many Long Island churches. Huntington, Bayshore and other points have witnessed Mass said on church lawns before behatted parishioners. Death is proportionately as busy in the little parishes as in the crowded cities.”

A short item on page 1 of the same edition reported that 12 priests in Philadelphia had died from the flu.

The Tablet of Oct. 19, 1918, reported the situation in Philadelphia was serious. Archbishop Dennis J. Dougherty gave permission to thousands of sisters to volunteer as nurses. The Tablet also pointed out, “To every pastor, permission has been given to utilizing church edifices, especially parish halls and parochial school buildings as hospitals. Priests and nuns were advised by the Archbishop to wear masks while attending to the sick.

One of the most striking references to the Spanish flu came in The Tablet’s Dec. 21, 1918, edition when Father Bernard Quinn, an Army chaplain from Brooklyn, wrote from “somewhere in France” about his experiences. The missive, dated Nov. 18, 1918, said:

“We’ve had a rather serious time with the Spanish Flu. It came on everyone so suddenly, that we couldn’t make out what it was at first. It usually developed pneumonia of a serious type and carried off those stricken with it very quickly. We heard of it making the States but I hope it was not in such disastrous degree as over here. I think we are quite rid of it now.”

Father Quinn returned to the U.S. after his service in World War I and went on to become a pioneer in ministry to black Catholics. His cause for sainthood is under review at the Vatican Congregation for Saints’ Causes.

The effects of the Spanish flu continued to be felt the following year and advertisers were quick to offer solutions to the disease. The Feb. 8, 1919, edition of The Tablet included an ad for Father Mollinger’s Tea that claimed one spoonful in a cup of hot water would fight coughs, colds and influenza overnight. “You will wake up with a clear head and fever gone,” promised the ad.

Finally, a little Tablet history: The paper dated March 16, 1918, recorded the death of former managing editor J.A. Cummings. The obituary reported he had died on duty with the U.S. Army at Camp Upton after contracting a cold that had developed into pneumonia. It’s not a stretch to think his illness was related to the flu. The journalist was buried from his home parish, St. Joseph’s on Pacific Street, where The Tablet is currently based.