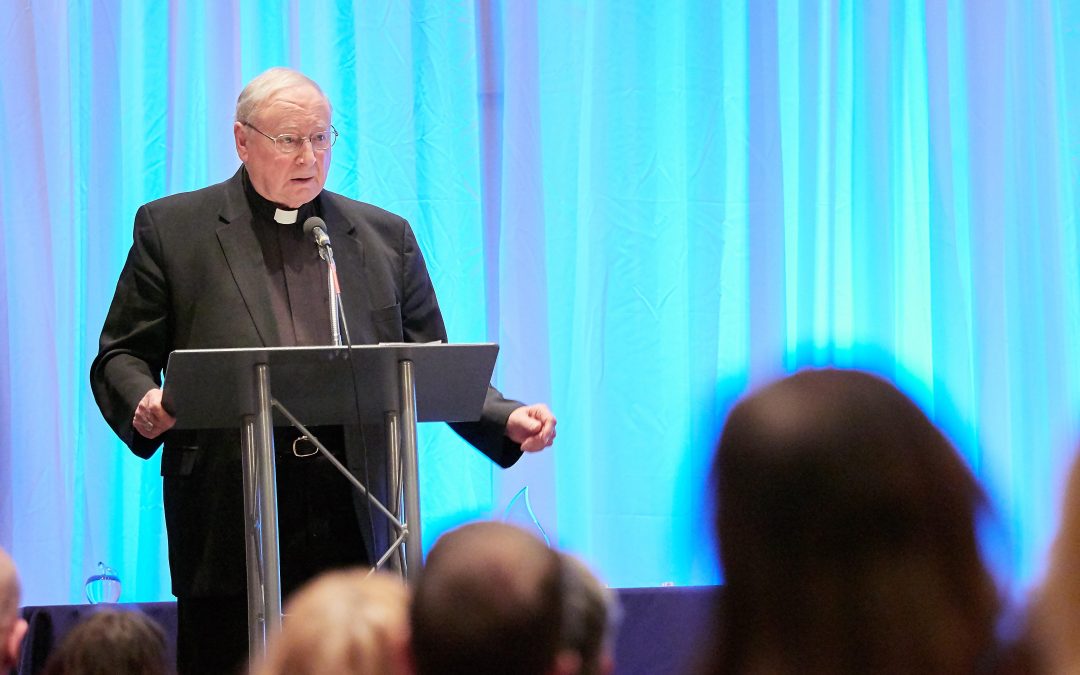 Catholic education was celebrated Jan. 27 as the Catholic Schools of the Roman Catholic Diocese of Syracuse held the 11th Annual Light the Way Scholarship Dinner.

Bill Crist, diocesan superintendent, said the event served not only as a great way to kick off Catholic Schools Week, but also as an opportunity to “take a step back and celebrate… to come together as friends and family and look at the great things we do as Catholic schools.”

Danielle Cummings, diocesan chancellor and director of communications — and emcee for the evening — noted the event also provides support for families who need tuition assistance: Over the past 10 years, the dinner has raised more than $250,000, she said, funds beyond the nearly $1 million awarded annually through the HOPE Appeal.

Several individuals received special honors for their contributions to Catholic education at the dinner. The 2017 Light the Way Award was presented to Most Rev. Thomas J. Costello, retired Auxiliary Bishop and former Superintendent of Schools in the Diocese of Syracuse, and Most Rev. James M. Moynihan, retired Bishop of the Diocese of Syracuse. The award honors those who have served the Catholic schools with distinction.

Crist said he felt the honor was long overdue to the recipients. Bishops Moynihan and Costello, as well as current Bishop Robert J. Cunningham, “have been amazing ambassadors and supporters of what we try to do in Catholic education, which is evangelize the young people of our Church and the young people of our parishes,” he said.

Bishop Moynihan’s award was presented to him several weeks ago during a ceremony at his residence at the Nottingham Senior Living Community, and a brief video of the gathering was shown at the dinner.

Cummings offered remarks about the bishop and his service. A native of Rochester, Bishop Moynihan was ordained and installed as Bishop of Syracuse in 1995. “He immediately listed three priorities for the diocese: the promotion of life, vocations, and Catholic school education,” Cummings said.

“Bishop Moynihan had a strong allegiance to Catholic schools. He visited every school multiple times during his tenure, and his Catholic Schools Week calendar was filled with Masses, blessings, and special visits to all of our schools. Visiting with Catholic schools students was one of his highlights as bishop.

“Unfortunately, he served, as many of you know, at a time of great challenge for some of our schools and had to make the difficult decision to close schools due to low enrollment. I can tell you personally these were some of the most difficult decisions he ever had to make. He would work with school communities and give them time to rally and increase enrollment, but at times, these efforts did not result in the enrollment that was needed. But there’s no doubt that he was a champion for our schools and our teachers.

“In 1999, he kicked off the Heritage Campaign, with a goal of $33 million…. The campaign was a huge success, raising $44 million; $14,500,000 was earmarked for the Catholic school endowment fund and [is] still funding initiatives in our schools today. He believed that Catholic school education must always be an option for our families and is an integral way of growing and strengthening the Catholic faith,” she said.

The award’s co-recipient, Bishop Costello, was ordained for the diocese in 1954. Just six years later, he was named superintendent of Catholic schools. He served in that position from 1960 to 1975.

“Bishop Costello was immediately recognized by both the Church and the community as a visionary, a collaborator, and a thoughtful administrator who cared for each and every student, teacher, family, and certainly the community at large,” Cummings said in her introductory remarks.

“Although there was significant growth during his tenure, Bishop Costello also faced a number of challenges, most of which were the cultural changes being witnessed and experienced in the 60s and 70s. Equal rights, racial tension, political turmoil, Vietnam, and more had a great effect on our Catholic schools. As superintendent, the then-Msgr. Costello was a calming voice, a strong voice, who advocated for social justice. He was a voice of reason, even when reason was not accepted as the norm.

“As the native son of our diocese, he’s been our leader, our mentor, our advocate, and our role model. He’s fought against injustice his whole life, consistently speaking for the poor, the needy, the disenfranchised, while always advocating for the dignity of the human person,” Cummings said.

In his remarks, Bishop Costello recalled his appointment as superintendent, just six years ordained and 31 years old: “To say that I was in over my head is a gross understatement,” he said to gentle laughter from the crowd. “However, I dove in the deep end of the pool with an enthusiasm that can be explained only by unawareness.”

Bishop Costello spoke of the high schools that opened during his tenure, of the peak enrollment hit in 1964 — 43,265 students under instruction — and of the “loosely confederated” system of parochial schools.

“Like our churches, our schools today are leaner. They’ve been pruned, and they are stronger,” he said. They are a system of Catholic schools, and each has earned accreditation by the Middle States Association Commissions on Elementary and Secondary Schools — “that is no insignificant accomplishment,” he said.

“Thanks to you, Catholic schools will continue to deliver quality academic foundation, solid moral formation, authentic grounding in our faith, and an educational experience that equips one for a lifetime,” he told those gathered.

Donna Skrocki, who has served as the physical education teacher at St. Margaret’s School in Mattydale for 23 year, received the Witness to Faith Award.

“Mrs. Skrocki is the heart of the school. She really puts her whole self into everything that she does and goes way above and beyond the expectations of just a job description to implement wonderful programs that help serve our children,” Amanda Hopkins, principal of St. Margaret’s, told the Sun before the ceremony. “But she does it in a way that keeps our faith at the center of what we’re doing.”

Skrocki worked for 20 years as a nurse before returning to school to become a physical education teacher, something she’d always wanted to do, she said. As she closes in on 24 years of service at the school come March, and on retirement come June, Skrocki said St. Margaret’s has meant “everything, everything” to her. “I’m honored beyond belief,” she said of receiving the award.

Patrick Kinne received the Distinguished Alumni Award. Attending Catholic schools from kindergarten to high school, Kinne graduated from Bishop Grimes Jr./Sr. High School in 1998. He returned to Grimes six years later to teach French; after ten years in that position, he was named assistant principal of his alma mater.

Before the ceremony, Kinne said that receiving the award was humbling and that, when he was notified he’d be receiving it, “I didn’t really know why, because I’m doing my job and I’m doing what I love and I never expected to be recognized because it’s what I love to do,” he said. “But to be able to share it with so many teachers and faculty members and people that helped get me to where I am today means a lot.”

Kinne’s mother, Ellie, who taught kindergarten at St. Lucy’s School in Syracuse for 24 years, said her son receiving the award means “more than I can ever tell you…. I know the effort he truly puts in every single day.” Grimes Principal Brian Nolan echoed that sentiment, noting Kinne’s “commitment and the deep love he has for the school — I think he bleeds Bishop Grimes blue,” he said.

Kinne said he hoped to show his students that “if you are willing to listen and discern where God’s calling you, things will fall into place as they’re meant to be.”

The Catholic Schools also acknowledged three educators who have each served the diocese for 40 years: Lorraine Ciaccia of Notre Dame Jr./Sr. High School, and Cynthia Sigbieny and Maryann Buck, both of Notre Dame Elementary School.

Ciaccia was unable to attend the dinner, but told the Sun in an email that “having had the opportunity to work in a values-centered environment has been a gift to me.” Reflecting on her years of service, she said, “I would have to say my dedication is rooted in my own Catholic education and the impact it had on my life. I decided that was what I wanted for my own children and I wanted to contribute to establishing that connection for other children as well.”

Notre Dame High Jr./Sr. High School Principal Sister Anna Mae Collins, CSJ, offered her praise in an email: “Lorraine Ciaccia has been the Director of our Special Education for 23 years. She is a very strong advocate for the needs of our students. Lorraine works diligently with students, parents, faculty and the local public school district to make sure the needs of our students are being met. Notre Dame is truly blessed by her presence and all she does for our students and families.”

Sigbieny, who teaches pre-K, said her love for teaching and watching her students grow and progress has kept her going for her nearly four decades in the classroom. “It’s the love of it,” she said. “I just love those little kids.” It feels good to be recognized for her years of service, she said. “I’m very honored.”

Buck, who teaches second grade, said she fell in love with Catholic education and loves teaching kids about God. She also loves when she encounters former students. A few years ago, she was shopping for a new television. She asked the young man helping her at the store if the staff would come to her home to program the TV. “He looked at me and he said, ‘Nothing is hard; it’s challenging,’ and I said, ‘Oh my goodness, I taught you,’ because I instill that to this day in my kids.” The former student went on to tell her that school was never easy for him, but that every time he got down, he’d remember what she taught him.

Experiences like that are “worth all the effort,” Buck said.

Notre Dame Elementary Principal Mary Rossi said via email, “As a school community, Notre Dame Elementary School congratulates and celebrates the accomplishments of both Maryann and Cindy. Their dedication to educating our young students throughout four decades in our Catholic schools is certainly admirable!”