Church wasn’t prepared, either, for pandemic, nuncio to U.S. says 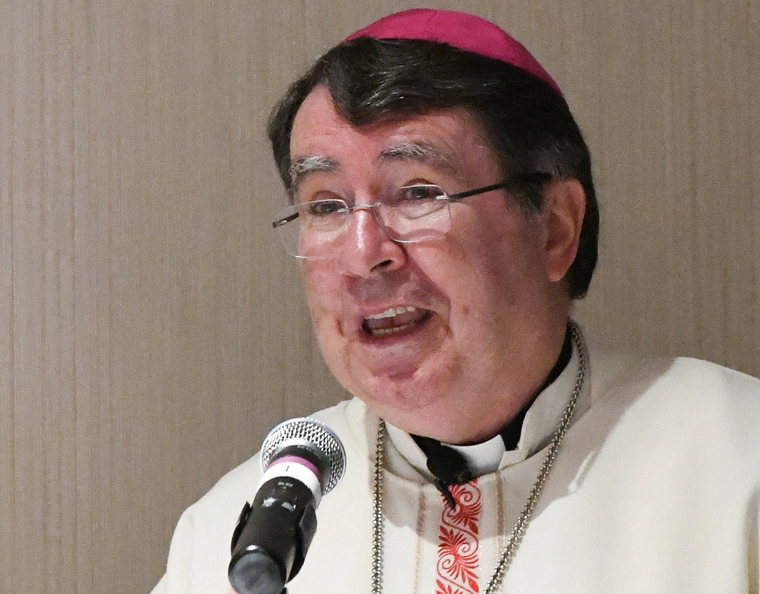 WASHINGTON (CNS) — Just like billions of people throughout the world, “the church was not prepared” for the coronavirus pandemic, said Archbishop Christophe Pierre, the Vatican nuncio to the United States, in a May 6 interview with Catholic News Service.

“We are also people in an organization” beyond just a religion with adherents, Archbishop Pierre said in the interview, which was conducted via Zoom. “The other day I was with an archbishop who was telling me, ‘Today, we have 16,000 people to give salary to, people who work for the church, and we have a huge organization.'”

In response, “we have to innovate. We have to be creative,” Archbishop Pierre said.

He warned, though, of another malady that could strike the church.

“We live in a drastically changing time,” Archbishop Pierre said. “May I say, in our church at times we take for granted what we have until it disappears. The empty church will not just be covered with vines, the empty church is provoked by another virus: the loss of faith, the lack of transmission of faith in the family, in the schools, in the society. A lot of the young people who have not had any belonging to the church. They have not received the gift of faith. They have not been invited to follow Jesus.”

The nuncio said he has heard from some “protesting” people that “the bishops have closed the churches, there is no access to the sacraments, and so forth.” But “we suffer what they suffer. The spiritual dimension of the meaning, maybe, of God’s presence in the world is being rediscovered.”

That is how he interpreted the May 1 reconsecration of the United States and Canada by their respective nations’ bishops to Mary. Archbishop Pierre noted that bishops in Latin American countries have reconsecrated dioceses — and in some cases the entire nation — to Our Lady of Guadalupe, patroness of the Americas.

“It’s an act of offering, knowing that God is there, taking charge of all of us. Our faith is not an idea. It’s not just an ideology. There is nothing magical. It’s a relationship with a person,” he said.

“In our private devotions, we have constantly these practices of consecration to the Sacred Heart. You know there is a kind of culture … when the new home is going up, you invite a priest just to bless your home, you put up an image of the Sacred Heart. These kinds of things,” which he said help make people “aware that God is present.”

Concern for those most at risk during the pandemic weighed on Archbishop Pierre’s mind. “The church has to find ways and means. Actually, to be honest with you, since I’ve been in this country, I have seen how many works are done by organizations. They don’t make noise about it, but Catholic Charities, CRS (Catholic Relief Services), and many others, there are many. Not just the big ones, (but) dioceses and so forth,” he said.

“Another bishop was telling me a few days ago he was discovering how many were poor — and so we have to do something,” Archbishop Pierre added. “I would give a lot of attention to the migrants. The migrants are those now in a very difficult situation because of the precarity of their situation. Many of them are contracting the coronavirus and they are not being paid attention to.”

He said: “The other day we had a kind of meeting through Zoom with a lot of actors in the church, Catholic Charities, people in charge of education, we were about 20 people sharing our experience. And I was amazed to see how people are acting, not just to foresee what will happen after that, but to be present .A bishop was telling me how many people are in need because they are poor. They are trying to organize a solidarity outreach to the poor.”

This has filtered to the parish level as well, he said, having heard reports of “so many priests now, calling their parishioners all the time” and of “voluntarily, priests going to the hospital. … We have to innovate, not to repeat the same things as before.”

In his conversations with U.S. bishops, “first and foremost, they all suffer,” Archbishop Pierre told CNS. “‘Where are you, bishop?’ ‘At home.’ But you know, on the other hand, I also feel they have this on their shoulders — the huge responsibility of animating a church” that has been paralyzed in a shutdown mode for close to two months.

“They are worried about the condition of the dioceses, they are worried about what will happen financially. And I think it’s important for the people also to share the responsibility of the bishops and their priests also. Because we know the resources of this side in defense of the people. It’s also a good way to help the people feel more responsible for the future of their own church.”

It has even touched Pope Francis. “For Francis, has had to readjust his practical life. He is like all bishops here,” he said, restricted to staying inside.

“I know that Pope Francis is very anxious to exercise his mission and to announce the Good News and to evangelize to reach out to people,” the nuncio said.

Even if speaking to an empty St. Peter’s Square, he added, the pope is “advocating for the whole world. I know his words are reaching out all over the place. I said to myself, this is the situational life of a Jesuit. He shows the way to discern and he shows the way we have to behave in this time.”

Likewise, Archbishop Pierre’s bosses at the Vatican Secretariat of State have been on restriction, although Pope Francis has assigned Cardinal Peter Turkson to figure out a reopening plan for the Vatican. “The Holy Father would like to have a kind of analysis of what is happening today. We know what is happening, but what should we be doing later. … What will be the perspective of the church for the next few months?”

The nunciature in Washington is still operating, but Archbishop Pierre’s own travels have been postponed. “We wait for the time when hopefully we will be able to do it as before, especially for me,” he said adding that a current problem is a number of new bishops who have “not yet been ordained or installed. So we wait and see for the moment. We will have to take decisions. Many things have been postponed.”

One event Archbishop Pierre had to miss was the May 6 installation of new Atlanta Archbishop Gregory J. Hartmayer. He did see, though, the new archbishop’s homily from a vespers service the night before the ordination in which Archbishop Hartmayer asked his listeners what lessons they will take from “these weeks of physical separation. We do not know how much we have until we lose it.”

“What if, thanks be to God, we are only separated the Eucharist and one other to be jarred into a different situation, a manifestation of the great and fragile gift to what we have been entrusted?” Archbishop Pierre asked aloud in a lament of continued U.S. church infighting, saying, “A house divided against itself will crumble.”