Crowd encouraged to be courageous men of action 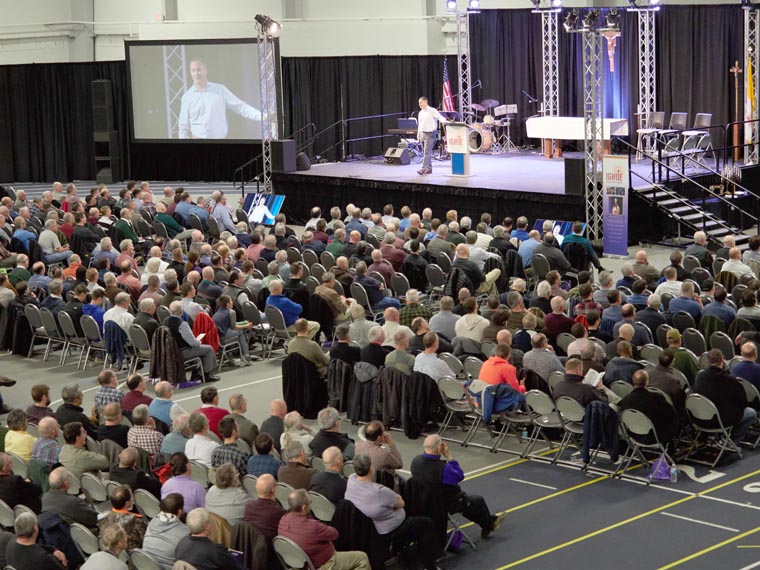 Chris Horn, who played for three NFL teams, held to the day’s theme of “It’s all possible with God” March 25 at the IGNITE 2017 Catholic Men’s Conference.

“Athletics teach you to act in the face of fear,” Horn told the crowd at Onondaga Community College’s SRC Arena. If anyone in the audience was asking what, precisely, is possible with God, Horn and several other speakers answered: courage, obedience, and action.

Horn needed all of those qualities growing up.

A cradle Catholic, he came from a small farming town in Idaho. His high school class was so small, it fielded an eight-man football team. He then went to a tiny college in Montana and became a four-time National Association of Intercollegiate Athletics All-American football player.

Then one day he went to Arizona to attend his future wife’s graduation. Horn had a tape of his football highlights, and his father wanted him to present it to the Arizona Rattlers of the Arena Football League. That’s where obedience came in.

“‘Out of obedience, you will take that to their office,’” Horn said his father told him. It so happened that that day, the Rattlers’ head coach was there: Danny White, the former quarterback of the NFL’s Dallas Cowboys. Horn got the job as a wide receiver.

Horn, who now lives in Phoenix, Ariz., led the Arena League in many categories and moved up to the NFL’s Kansas City Chiefs. The team gave him a thick book and told him to memorize Player X’s plays. A fanatic about lifting weights and studying, Horn memorized much more. In training camp, when another player was injured, Horn said, “‘Coach, I know Z.’” And when Player F was hurt, the coach said, “‘Put him in there, he knows what he’s doing.’”

If he lined up against an opponent who was not only mad at him but also mad at his mother, just for an extra edge, Horn kept to his hard-core Catholic beliefs. Those who use anger for motivation, he said, ultimately just quit.

One day when he was still in the NFL, a teammate told him guys were going to a strip club. He said he looked at them and emphatically said no   because he had made public vows to his wife and to God. A handful of the players, he said, were married, and that day at least, the married men did not go to the strip club.

“Take courage,” he told the IGNITE crowd. “You can do it.”

Another time, Horn had 20 teammates over at his apartment watching TV. On a commercial, a man admitted that he had killed his own brother in a DWI accident.

Horn said his teammates starting ripping the man. It was what Horn called a pivotal moment, like being suddenly called into the huddle, with the QB babbling about the play. Horn was sweating, nervous. He thought he might get thrown out of his own apartment. But “I could feel like this call was in me,” he said.

“Guys, that’s not right,” he said to the assemblage mocking the man on TV.

To his delight, many responded:   “Horn’s right.”

“Other people want people to lead in the right direction,” Horn explained.

On another occasion, the topic of abortion came up with teammates.    Horn asked them if they all had an immortal soul. They answered affirmatively. He then asked them if it makes sense that a baby coming out of the birth canal only suddenly acquires a soul at that moment.

He cited this response: “Dang, Horn, like, that’s a good point.”

“Be courageous, march forward,” he told the IGNITE crowd.

Like the day’s other speakers, Horn told the men to embrace the sacraments of penance and the Eucharist.

“The sacraments are the key,” he said.

The day coincided with the Feast of the Annunciation, and Bishop Robert J. Cunningham presided at a Mass to start the conference. The Mass was in memory of Bishop James M. Moynihan, who died March 6.    “Holy Mary, Mother of God,” Bishop Cunningham said, “pray for us that we may follow your example. Saint Joseph, Spouse of Mary and Foster Father of Jesus, pray for us that we may listen and act upon God’s word, just as you did.”

It was just what Jason Lindsay, 33, of Binghamton, and his father, Harry Lindsay, 59, of Harpursville, a Binghamton suburb, wanted to hear.

“I thought it was amazing,” Jason said of Bishop Cunningham’s homily.   “That’s why we wanted to come up.    When I was confirmed, he did Mass. I think he’s brilliant, just how he speaks. He talks to you. He does.”

“I thought it was wonderful … soft-spoken,” Harry said of the bishop’s sermon. “He’s very direct when he speaks. Not hard to understand at all; gets his point across … puts you at ease.”

Speaking very directly about his life was IGNITE speaker Mark Houck, from Pennsylvania, co-founder of a laymen’s apostolate called The King’s Men. Like Horn, he played football, and he said he was even scouted by the New England Patriots.

But about a dozen years ago, Houck said, he was addicted to pornography. “I was in bondage,” he said, “but I was set free.”

Houck, who will be 43 this year, said that in 2006, pornography was a $100 billion business. “We have a monster,” he said, “and it’s gonna take men willing to say no. … This thing, I believe, is the primary weapon of the devil today.”

He started fighting pornography in 2004, he said, by praying in front of sexually oriented businesses (SOBs, he called them). He recommended that men today do the same, and pray in front of abortion mills too. “Be radical and reckless for the Lord,” he said.

Houck said that in the old days he was bored and lonely, but he did not bring pornography into his marriage. “You know what a good answer for boredom is?” he said. “Get married.”

Because Houck does not want to be among the “walking dead men” who ignore their family, Houck urged the audience to get out of the house with the family members — to take walks and to play sports together. He told them not to get caught saying “Don’t bother me, I’m watching the game.” He figures it’s ludicrous spending four hours watching TV.

“Anything after 10 p.m. on TV — not good for your virtue,” he said. And if men are doing alcohol and drugs, he said, they are not going to do well with their chastity.

Houck is a big proponent of prayer and penance. “When I’m praying with my kids, that’s my best prayer time,” he said.

He added: “You gotta take your son with you to confession. … God already knows what you did.”

After Houck spoke, IGNITE’S master of ceremonies, Father Joseph M. O’Connor, invited the audience to sit and think about a “solid takeaway.”

The next speaker, hailing from “beautiful Long Island,” was Msgr. Jim Lisante, the pastor at Our Lady of Lourdes Church in Massapequa Park.

A perpetually beaming man, Msgr. Lisante has been a contributor for 15 years to Fox News Channel, where Bill O’Reilly, a “sweet man of faith,” is a colleague. He also hosts the national television program “Personally Speaking.”

Doing nothing to suppress his natural Long Island accent, the monsignor added touches of Rodney Dangerfield and Don Rickles as he told stories gleaned from his 36 years of priestly observations: stories of  obedience, authenticity, stupidity, pride, and love.

The monsignor still helps his 96-year-old mom, who lives with one of his sisters. When his father suffered an attack, he applied CPR, but his father died in his arms. “I loved my dad and my dad loved me,” Msgr. Lisante said. “Isn’t that a wonderful way to go.”

Way back before his priesthood, a woman was in love with him, he said. Years later, he ran into her. His summary of the encounter: “It was nevuh gonna work out.”

He advised the audience not to be late with love, using an example of an exchange he does not want to be involved in at a funeral:

“‘You know, I really loved that woman.’

Msgr. Lisante told the IGNITE audience: “Don’t presume anything — say the words that matter.” He challenged the crowd to “look in the eyes of the people you love and tell them.” He also urged the men not to let Easter come without attempting to reach out to an estranged loved one, whether or not that person responds in kind.

Being, as he said, a “nice guy,” the monsignor is sought out to preside at many weddings. Early in his priesthood, he advised an engaged couple to express their love in ways other than sex before their marriage.

The future groom, Ray, sounding like Sylvester Stallone with a headache, said, “‘Father Jim, I think it’s a very, very stupid idea.” The future bride snapped: “‘What is this, something new from the Church?’” Msgr. Lisante informed them the idea has been around for 2,000 years.

One man told the monsignor that walking home from work, he often fell into the weakness of a massage parlor on a certain street. The monsignor had the answer: “‘Hey, stupid, don’t go down that block.’”

Despite people’s struggles, the monsignor said, “I think we have so much more faith than we know.”

Years ago, he ran a Family Life office for his diocese. “Often enough,” he said, “a woman would say to me, ‘Talk me out of this abortion.’”

The monsignor recalled speaking at a church in Hicksville, Long Island. A man named Stephen came up to him and said: “‘Twenty-four years ago my mom came to you … and was scheduled to have me terminated. And you apparently sat down with her for a while … and she decided to have me. … So she placed me for adoption. … I wanted to come and see you, just to say thank you.’”

The monsignor continued: “I said to him, ‘You know, Stephen, 99 percent of the time, whatever good we do, nobody comes back to say thank you.’

“And that’s our sin of omission. … Stephen wanted not to commit the sin of omission, but to find me, and to tell me something that has so enriched my priesthood. In bringing him into the world, it was … a blessing. … It gave me at least another 10 years of being happy about my priesthood. And I’m grateful to Stephen.”

His priesthood has been wonderful, Msgr. Lisante said, despite times of difficulty, pain, and loneliness. “How do you have a pain-free Jesus?” he asked. “I don’t know how you could ever do that.”

Ultimately, he said, he is looking forward to hearing this: “Jim, well done, good and faithful servant.”