Father Gerry: man of the ocean in sea of Orange 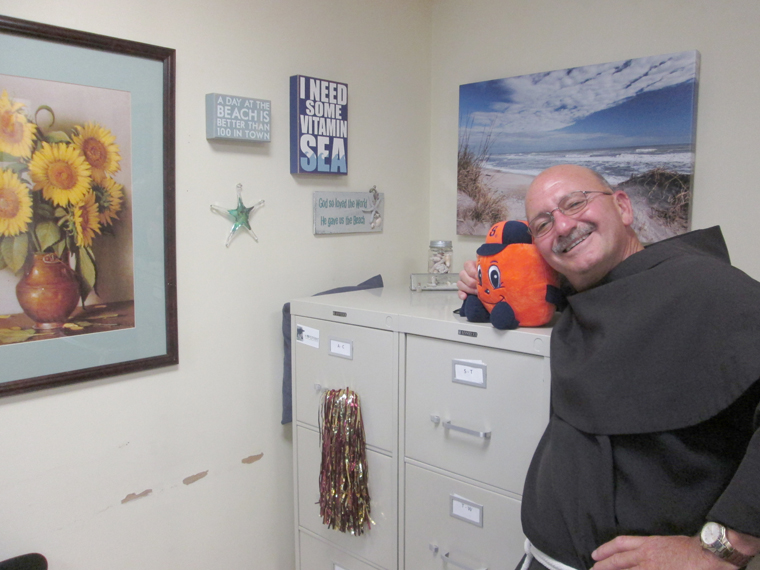 Friar takes over as new Catholic Chaplain at Syracuse University

A friar’s rope can pull both ways.

Father Gerry Waterman, OFM Conv., is busily settling in as the new Catholic chaplain at Syracuse University. He greets people with a big smile and laughs easily.

But he just as easily could have played the padre’s demurral, staying on as Associate Chaplain for Catholic Life at Elon University in North Carolina.

Yes, it was knotty for the man who sees himself as “representing and being the person of Jesus Christ for people”: deeply attached to Elon, but warming to the Orange.

When he was asked to visit SU, “I actually said no in my head,” Father Gerry explained. “But every time I went to bed, somehow God was interacting and I got very little sleep, and I knew I had to do something about it.”

Proving that he is amenable to advice himself, he talked with one of his confreres back home. “He said, ‘You can’t say no unless you do your due diligence and go up and look.”

And then there were signs.

The first: “Two of the students who gave me my tour were former altar servers for me when I was a pastor in Connecticut.”

Still there was doubt. He thought: “Unless the Holy Spirit hits me on the head with a two-by-four, I’m not going to say yes.”

The final sign was a great meeting he had with SU Chancellor and President Kent Syverud.

“And so meeting with the chancellor, there was definitely a movement,” Father Gerry said, “and the two-by-four hit my head, and I said, ‘Well, I have no choice, I have to accept this; this is what God wants,’ and it was; I’m sure of it; I’m positive of it.”

Asked about the farewell celebrations at Elon, he said: “Endless, endless.”

He loves that kind of emphasis; to him, a sublime belief is worth repeating. It’s as if all that time spent around highly expressive students has made him quite intense. And that’s OK; it helps him, as he says, engage.

“My father fished every day of his life, as far as I know,” he said, “and I fished with him often enough. So being on the water, in the water, at the water rejuvenates my soul.”

His maternal grandmother always thought he was going to be a priest, but the Franciscan priesthood was a bit of a surprise.

Many of his friends from elementary school went off to Notre Dame High School in Bridgeport, but his mother “forced me to go to the Franciscan school,” St. Maximilian Kolbe High School.

There, he made friends, “but the friars really impressed me.”

Father Gerry was educated in Franciscan seminaries in Granby, Mass., and Rensselaer, N.Y. He has served in many states on the Eastern seaboard and abroad.

When he fished with his father, they caught huge bluefish but threw them back. His job at Elon University, though, was a keeper for 11 years.

Father Gerry is a Conventual Franciscan, but nobody says he has to be conventional. He already is making changes at the Catholic Center at SU. He is rearranging the main worship room at the center, and he has added a 12:10 p.m. Mass at SU’s Hendricks Chapel on Wednesdays “to try and elicit participation by faculty and staff, not just students.” Other Masses are scheduled as well.

Asked for her quick impression of Father Gerry, she said it was an easy call: two thumbs up.

“The right man for the job,” she said. “He’s got a lot of energy. He knows how to work with young adults. He’s got a very successful track record. And he’s got a good vision; he’s getting stuff done already.”

Father Linus was a beloved charismatic figure known for his fondness for “one-dollar words.”

“It’s going to be different,” Byrne said. “There’s no comparing. But, yeah, Father Linus laid down a lot of important foundations.”

Father Gerry knew Father Linus very well and got along great with him: They worked together and lived in the same Franciscan community for a time. After work, they would have ice cream, chat, relax, and watch TV.

Asked if his vocabulary is a bit simpler, Father Gerry laughed: “Maybe, maybe, maybe. Maybe, yeah, I don’t need to use hundred-dollar words.”

Msgr. Jim Lang, the Vicar for Parishes in the Syracuse Diocese, said in an email:

“I think that Father Gerry is the right man at the right time to step up to this important role. His experiences as a priest and as a chaplain provide him with the right mix of balance, charism, creativity, dedication to the Kingdom of God, humor, sense of order and priority, priestly professionalism, to embrace his new ministry with joy and hope.

“Father Gerry brings 11 years of experience as a college chaplain. He is accustomed to working in an ecumenical and interfaith environment. For his ministry at the SU Catholic Center, this is an important skill set.”

That includes running, painting watercolors, and tennis. For a time, he also made wine commercially for the St. Anthony of Padua Province of the Franciscans on the East Coast.

Father Gerry has time for five or six hours of sleep per night.

There are no more fitful nights of Orange-vs.-Elon, though.

“You dream of the ocean, don’t you?” he was asked.