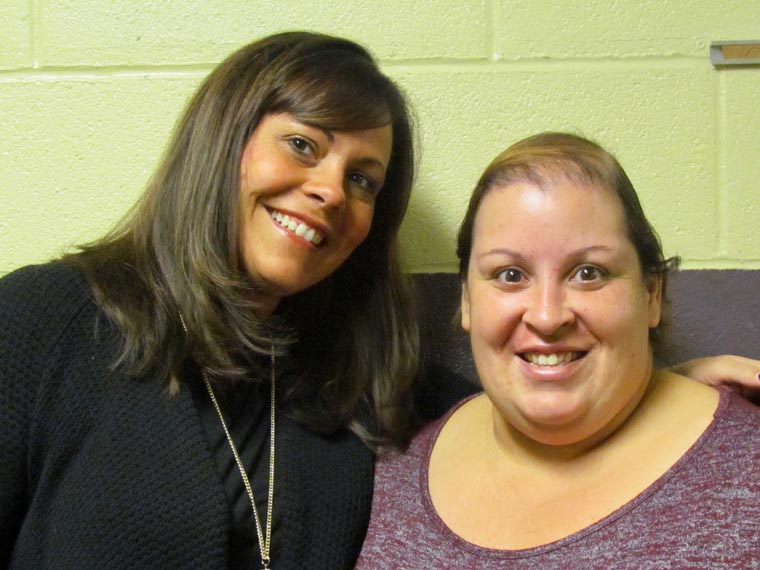 Holy Family School teacher’s aide Madalyn Figueroa Thomas has quite a few relatives in Puerto Rico. Instead of celebrating her birthday Sept. 20, she worried about them as they got pummeled. Amid the chaos, she waited about two weeks before finding out that all her relatives were uninjured and thankful to be alive. With power still out, they wash their clothes in a little creek, but they do not complain.

“Hurricane Maria has been a terrible disaster for my family, a true hardship for them,” Figueroa Thomas said. “They lost their homes and are struggling to get back on their feet. They have been without power and water since the hurricane and they may not get services back until sometime next year.”

To assist their beloved staffer’s relatives, Holy Family School’s Helping Hands group raised $1,600 with a “Popcorn for Puerto Rico” campaign. That total includes donations beyond the popcorn sale, and one parent donated shoes too.

“I would like to thank Holy Family School, the families, and the staff who have come together with prayers and the financial assistance that helped me to purchase emergency basic needs and food items that are so desperately needed now,” Figueroa Thomas said. A great deal of help came from art teacher Mary Babbles and second-grade teacher Liz Infanti.

About 75 of Holy Family School’s 132 students belong to Helping Hands; they do a service project every month. “So to be able to help someone right at our own school was awesome,” said Infanti, founder of Helping Hands.

The $1,600 check has allowed Figueroa Thomas to buy items like flashlights, “a whole bunch of batteries,” canned food, beef jerky, Pop-Tarts, and apple sauce. The items are urgently needed because costs have zoomed in Puerto Rico. In the early days of the hurricane, she said, people had to wait six or seven hours just to get $10 worth of gas. It didn’t go very far because her relatives have to drive the hills of the east coast, in the municipality of Yabucoa where the hurricane made landfall. A case of water bottles, she said, was going for $15.

It took two and a half weeks for her relatives to receive the first boxes that Figueroa Thomas sent; their post office closed for a while for lack of a functioning generator. She sent out four more boxes Nov. 20, and her relatives have received them. “They were so grateful for what we sent that they wanted me to tell everyone how thankful they are,” she said. She has also sent two money orders so that her relatives can buy what they need.

Her relatives are able to communicate with Figueroa Thomas sporadically. Her Aunt Lizzie Morales sent her photos showing a downed tree, a toppled water tank, rubble inside one home, and a demolished bedroom. In an Oct. 23 story, Catholic News Service said official reliable statistics about hurricane damage, including an accurate death toll, had been scarce and widely debated by experts. CNS reported Nov. 16 that there was still no clear path to recovery in Puerto Rico. The news service quoted Archbishop Roberto Gonzalez Nieves of San Juan: “You go day by day, but it’s overwhelming and traumatic.”

“Yabucoa is a beautiful small town; they have beautiful beaches. They have good weather all the time unless it’s raining. It’s a nice place to live. One of my memories is sitting on my grandparents’ porch and you can see the ocean and the ships going by. They live on the mountain. Yabucoa is on the Caribbean Sea.”

She and her husband, Terell Thomas, took their honeymoon in July in Puerto Rico. She said, “He got to meet a lot of my family. … He fell in love with it. First time, he’s like: ‘I want to go back.’”

Her mother, Teresa Figueroa, has an aunt in her 80s who lives in Yabucoa. Teresa hasn’t been able to talk to her yet because of the lack of phone service. Also, her mom’s brother lost almost everything in his house, Madalyn said.

Madalyn’s father, Luis Figueroa, has two brothers and a sister who live in Puerto Rico. Their loss included water damage and a broken door. “I tried to talk to my cousin a couple of weeks ago,” Madalyn said, “and she kept FaceTiming me, trying to communicate.”

The ability to help people such as the Figueroa family is itself a cause for gratitude, said Sister Christina Marie Luczynski, CSSF, principal of Holy Family School. The Helping Hands sold cups filled with popcorn for $1 apiece during lunch for three consecutive Fridays.

The “Popcorn for Puerto Rico” sale, Sister Christina Marie said, taught the children “how grateful they are for what THEY have, and for where they live. … They said, ‘We don’t have those kinds of storms or something we have to worry about’; we get high winds but nothing that devastating.”

The school had a chess club that disbanded, she said, so that the members could join Helping Hands. “They can learn chess at another time,” she said.

Infanti’s son Luke, a sixth-grader at Holy Family, said Figueroa Thomas, whom the students call “Miss Maddy,” “does everything for the school that she can, so that’s the least we can do.”

“It was actually really easy selling the popcorn,” he said. “All you gotta do is buy popcorn and just sell it.”

Fifth-grade Helping Hands member Joe Florada said the popcorn sale taught the students that not everybody in the world has food.

Figueroa Thomas has worked at Holy Family since 1999, first for the Early Childhood Education program and currently in teacher Mary Goldsmith’s pre-kindergarten classroom, where she does activities including reading with the children.

“I have always wanted to work with kids,” she said. “They like to hear me speak to them in Spanish, so I try to teach them a little bit of Spanish, like their numbers. I hear the kids saying, ‘Oh, I know Spanish.’ I said, ‘Oh, I do too,’ so we count in Spanish. … They’re always like, ‘Can you talk to me in Spanish?’”

She hopes things improve in Puerto Rico as Christmas and Three Kings Day (Jan. 6) approach. Right after Thanksgiving, she said, people in Puerto Rico “start going to people’s houses and playing music, … all the way to Jan. 6.”

“I’m just grateful for everybody that helped,” “Miss Maddy” said.