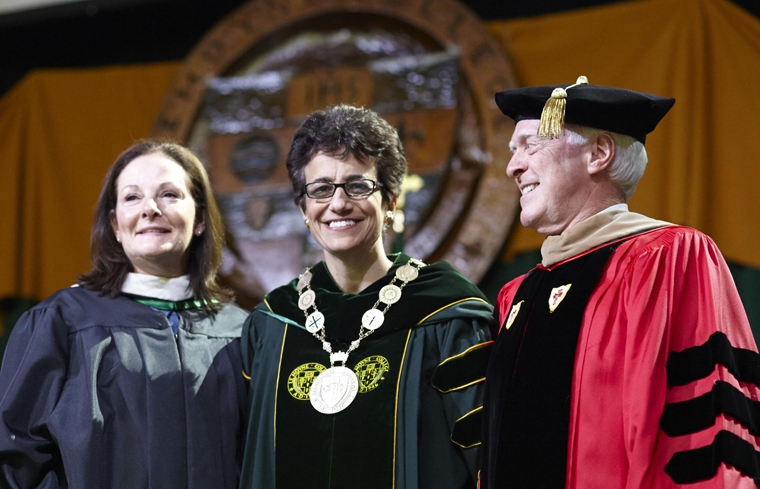 Province of the Society of Jesus, asked her if she would foster the Catholic and Jesuit mission as president of Le Moyne College.

“I shall,” she said during the March 20 inauguration, cementing in two words the commitment inherent in her appointment nearly a year ago. Father Cecero and Father John Bucki, SJ, rector of the Le Moyne College Jesuit Community, raised their hands over LeMura’s bowed head. Their blessing made official the Syracuse native’s historic place as the world’s first lay female president of a Jesuit college or university.

The missioning from the Society of Jesus was one highlight of two days of speeches, congratulations, prayers, music, laughter and tears as the Syracuse college inaugurated its 14th president. Speaker after speaker praised LeMura’s work ethic, humility, collaborative style and humor. Events paralleled the values of Jesuit education, touching the mind, heart and soul of participants: historic and literary references; a fun run; and music and prayer. The celebrations were sacred, but not solemn.

During a Mass of Celebration in the college’s Panasci Family Chapel, Father Charles L. Currie, a Le Moyne trustee and longtime Jesuit educator and administrator, noted that he had spotted LeMura’s qualities when he first met her. He praised her leadership and compared her to the recently deceased Father Theodore Hesburgh, Syracuse native and legendary Notre Dame leader.

A few minutes later, LeMura described her own memory of meeting Father Currie at a conference in Chicago. She had sneaked out to catch a few minutes of an NBA game. She was, she said, gesticulating wildly and “using some colorful language” when she heard a voice. “Kid, you got spunk,” she recalled him saying.

She showed her spunk — and stamina — during two jam-packed days of inauguration events, starting March 19 with a 1.4-mile fun run that raised money for her alma mater, Cathedral Academy at Pompei. She was feted that evening with a concert highlighting some of her favorite compositions, including Aaron Copeland’s “Appalachian Spring.” Travis Newton, director of the college’s new graduate program in arts administration, credited LeMura with helping to create a music program at Le Moyne.

Hundreds of people attended the Mass, and more than 1,000 filled the Anthony A. Henninger Athletic Center for the inauguration. After both events, long lines waited to greet her. The processional that opened the inauguration included representatives from more than 50 colleges and universities; college administration, faculty and staff; the board of trustees; and local dignitaries. Several groups of students, many wearing green (the school colors are green and gold), stood at the back.

When LeMura entered the room, the crowd exploded in applause and cheers.

During a two-hour ceremony, speakers praised LeMura and the place Le Moyne holds in the community and in their lives. Katko said his father graduated in one of Le Moyne’s first classes and his parents met at the college. Mahoney said her son, Max, will attend Le Moyne in the fall.

In her address, LeMura paid homage to her immigrant roots and her family’s commitment to education. Her parents emigrated from Italy, and LeMura grow up on Syracuse’s North side and graduated from diocesan schools. Her mother Mary, who is 87, was at her side most of the day. She acknowledged her mother; five siblings; her husband, Larry Tanner, who teaches at Le Moyne; and their daughter, Emily, a junior at Fordham College. “Grazie e vi amo tutti,” she said, which means, “Thanks and I love you all.”

She praised her parents’ faith as described in the New Testament Letter to the Hebrews, which includes the line, “Faith is being sure of what we hope for and certain of what we do not see.” For LeMura’s parents, that meant “faith in their family, in their children, in this country, faith in the future and faith in the spiritual truths made manifest by this institution.”

Her family and members of the board of trustees have pledged $100,000 to start a scholarship in honor of LeMura’s parents.

Le Moyne, the second youngest of 28 Jesuit colleges in the United States, was founded in 1946. But plans for the college date to the late 1930s, the vision of the late Bishop Walter Foery. The idea was put on hold during World War II.

“The need for a Jesuit, liberal arts college was conceived during dark times and despite serious doubts,” LeMura said. “In other words, Le Moyne College itself is a creative, faith-filled response to crisis and uncertainty. At a moment in history when war loomed and the world seemed to be spiraling toward a bleak future, the Jesuits affirmed the primacy of faith and the power of the intellect.”

A Le Moyne education is “the armor that will allow students — of all backgrounds — to thrive in a sometimes dangerous, always challenging world,” she said. The college’s mission has not changed, she added. “While moving boldly forward — in the sciences, the social sciences, in the arts, in business and the humanities — we honor our heritage.”

She promised further collaborations between the college and the Central New York community and the world’s 189 Jesuit institutions of higher education. She quoted Pope Francis, the first Jesuit to lead the world’s 1.2 billion Roman Catholics. “The world is criss-crossed by roads that come closer together and move apart, but the important thing is that they lead towards the Good,” the pope said in 2013.

“I am proud to shepherd Le Moyne College down these roads, always toward the good,” LeMura said.

“May she treasure and promote
Le Moyne’s rich heritage, building on the wisdom of the past and open to the options of the future. Inform her with reflection and discernment so that her decisions support an active service of our brothers and sisters, rooted in justice and love.”
— Syracuse Diocese
Bishop Robert J. Cunningham

“We have a president who (dreams) big dreams and makes great music.… Don’t forget to take care of her. There are few, if any, like her.”
— Father Charles L. Currie, SJ,
Le Moyne College trustee and executive director of Jesuit Commons

“We loved her first. She’s one of us. She’s an example of what can happen when you believe in children.”
— Syracuse Mayor Stephanie Miner

“I know you feel the responsibility of being the first woman. I know that leading a college can be lonely sometimes and I have only known you for one year. But based on that one year, and based on the people in this assembly hall who have known you all your life, I know that we all agree that you have the mind and the heart and the soul and also the grace and humor to do a great job here. But b
eyond the mind and heart and soul, you have friends, and we will be there for you.”
— Syracuse University Chancellor Kent Syverud

View letters of congratulations and proclamations at www.lemoyne.edu.