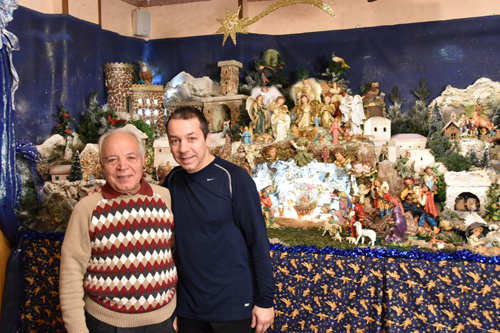 More than traditional Italian food is served up at Angotti’s Family Restaurant in Syracuse – Christmas tradition is on the menu as well.

A sprawling Nativity scene graces a corner of the restaurant’s dining room, a display lovingly created each Christmas season by Anthony Angotti and his family.

“In Italian, you call it presepio, the manger,” he explained.

But Angotti’s presepio is more than a manger; this is no table-top crèche.

Measuring some 14 feet long by 7 feet high, the Nativity includes buildings, mountains, trees, a running waterfall and mill stones, and dozens of human and animal figurines, all topped by a sparkling gold shooting star.

Angotti said he’s been creating these scenes since he was a youngster. The first presepio in the restaurant appeared in 1986, when he took over the business from his father, Carmen. “The first one [in the restaurant] was a small one in the corner,” he said. When an addition was built in 1997, the display grew.

It took about 45 hours of work between Angotti and his daughter to put the scene together this year, Angotti said. It went up just after Thanksgiving and will remain until after the Epiphany.

The display looks a little different every year, but Angotti’s method is the same: “You have to make the floor first. Put the canvas next. And then start from one side, moving from the left to the right,” he explained.

The scene centers around the manger, which will hold the baby Jesus come Christmas Eve night. The figure, made in Spain, is a favorite of Angotti and his son, Bobby. Bobby’s young daughter, Lola, will do the honors.

Just outside the manger are camels and wise men, made by Angotti himself in a ceramics class in 1972.

And especially treasured are the figures of men and shepherds passed down to Angotti from his father. They are nearly 90 years old, Angotti said.

Customers of the restaurant look forward to the presepio each year; by the time the State Fair closes in early September, people are starting to ask about it, Angotti said.

That’s why Angotti thinks nothing of sacrificing some tables to make room for the scene: “Because it’s tradition,” he said.

“Tables [are] not important,” Angotti laughed. “Space is nothing compared to this.”

See photos and video (in the December 23 edition of “Around the Diocese”) of the Nativity scene below.

The baby Jesus figurine is the center of the Nativity scene at Angotti’s Family Restaurant. (Sun photo | Katherine Long)