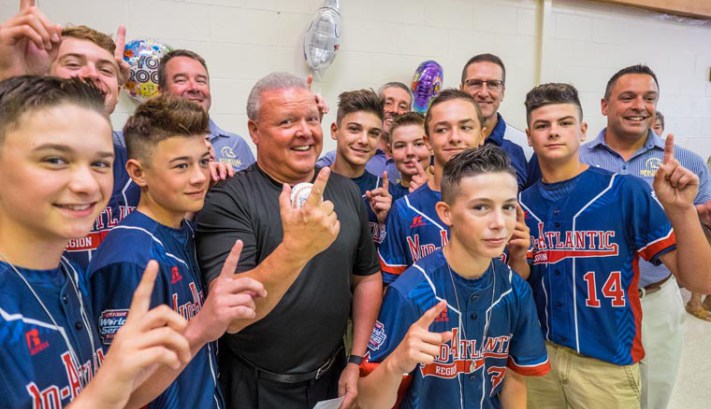 Maine-Endwell Little League world-championship team members and coaches gather with Father Clarence F. Rumble during a reception in their honor after Mass in 2016 at the Church of the Holy Family in Endwell. (Sun photo | Chuck Haupt)

The champs are still together — as pals and multisport athletes.

And more honors have gone to the famous Maine-Endwell team that won the 2016 Little League World Series. Six of the players and all of the coaches  attend Church of the Holy Family in Endwell.

On Sept. 1, the team was inducted into the Binghamton Baseball Shrine along with former General Manager Jim Weed and Marion O’Connor, who donated $200,000 for renovations to NYSEG Stadium. The shrine is an entity of the Double-A Rumble Ponies of the Eastern League.

Eddie Saunders, director of marketing and promotions for the Rumble Ponies, said in an email that the induction took place on the field before the game.

Broadcaster Roger Neel served as emcee and recapped the LLWS title run  by the Mid-Atlantic team from M-E. Nine of the players attended along with their coaches. “It was touching,” said Matt Raleigh, who wasn’t in the dugout for the LLWS games but who trained the team before and after every game.

Saunders said the team was awarded a plaque, and a plaque will be hung up in the stadium as well. The shrine, Saunders said, is a “Hall of Fame” that was created in 1993. Enshrined are players such as Thurman Munson, Bert Campaneris, Vernon “Lefty” Gomez, Joe Pepitone, and Whitey Ford.

“Personally, I know that the M-E team victory brought a new and unique spotlight to not only Maine-Endwell but the entire Southern Tier region,” Saunders said. “The Binghamton Mets at the time were fortunate enough to host two watch parties in which the stadium was open and the game was shown on the Jumbotron in right field. It was a great feeling to have members of the community come together and cheer on this young group of men as they put the area on the map for Little League Baseball.”

“I think it’s amazing that they have been inducted,” said Father Clarence F. Rumble, pastor of Church of the Holy Family. “The boys are excited and very humbled, and we’re proud that they’re part of our parish community.”

The Raleighs attend Father Rumble’s church. Matt’s full-time job is running the Raleigh Baseball Institute (RBI) in Endicott, where aspiring baseball players can learn the art of the compact swing. Matt used that technique to lead the nation in home runs in his senior year at Western Carolina University. And he still holds the season home run record, 37, for the Double-A Binghamton Mets, predecessor of today’s Rumble Ponies. As a manager in the Florida Marlins’ farm system, he won a World Series ring for staffers. Now he coaches the Maine-Endwell High School baseball team.

Matt said the LLWS champs were busy being honored, including at the State Fair, for a good six to eight weeks after their triumph. Squad members have been honored on the fields of the Yankees, the Mets, and the Pittsburgh Steelers, and they were even invited back to attend the LLWS. They were also invited to the Ellen DeGeneres Show, Matt said, but the kids would have missed school and enough was enough.

He said the players’ heads never got too big, they work extremely hard, they have continued their success in the classroom, they are role models for the community, they also play football and basketball, and four or five guys or more have a chance to play college baseball. Seven or eight of the champions gather for Saturday night basketball or other games. The best thing of all, Matt said, is that they are still best friends or even better friends than they were in that magical year of 2016. “It’s something as a dad you love to see your kid do,” Matt said.

His son, Brody, was a starter on the championship team. Brody practices hitting almost every night, and he’s “on page to do very well if he continues his program,” his dad said.

What’s another good baseball tip from the home run king?

Staying inside the ball, Matt said: “Can’t have a long swing, it’s got to be short.”