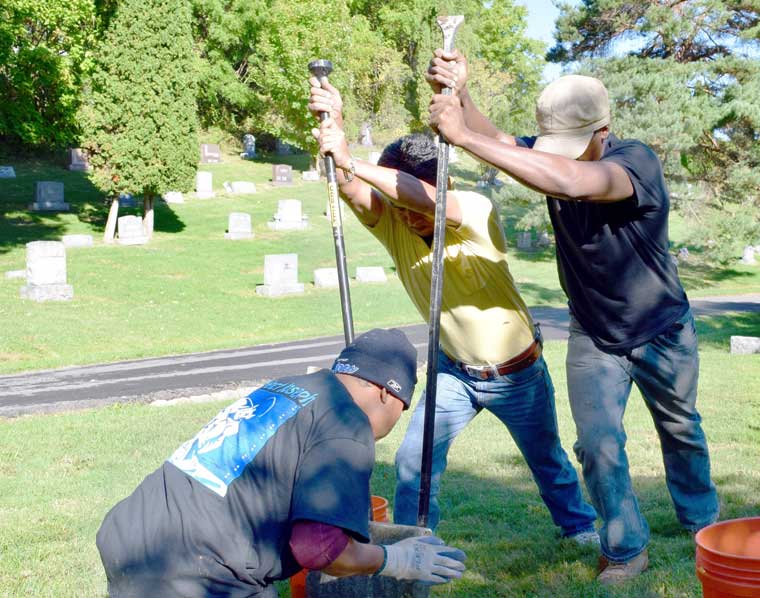 Spindly vine-like branches encroach on a toppled gray cemetery monument, crawling where they were never meant to go.

Time, weather, the hilly terrain, and vandalism have tipped over memorials here and there at the 50-plus-acre St. Agnes Cemetery in Syracuse, but a crew of rugged workers has launched a rescue.

Project Joseph, a property-maintenance arm of Catholic Charities of Onondaga County (CCOC), aims to right hundreds of gravestones in an effort that will take about six weeks.

The work follows the directive to bury the dead as part of the Corporal Works of Mercy, said CCOC Executive Director Michael F. Melara.

“We are excited and proud of the fact that we can do this kind of work in our Catholic cemeteries,” Melara said.

He added: “I’m pretty sure we’re repairing our own souls as we do this work. It’s really hard manual labor. There’s nothing fancy about it, just backbreaking hard labor to replace and repair these stones. We believe there is dignity in hard work, so this is a really good place for us to be.”

At any given time there are about 15 Project Joseph workers — people who lived at the Catholic Charities men’s shelter and refugees who had a really hard time finding a job.

Project Joseph workers received high praise from Randy Ramey, superintendent of  St. Patrick’s Cemetery and Calvary Cemetery in Johnson City. He said a crew of four very polite workers straightened out just shy of 300 monuments and got them back into shape in a matter of five or six working days four months ago at St. Patrick’s. The cemetery covers 18-20 acres.

“They were constantly working very hard, conscientious,” Ramey said. “They did a very nice job without having the experience; with me just explaining what had to be done.”

He added: “We’re hoping to bring these guys back. … I’m pleased.”

“This is truly something that the guys value,” said Christopher Patch, Social Venture Program manager for CCOC. “They value what they are doing over there. They want to give back the dignity to the people that are buried there.”

Because it’s hard labor, the Project Joseph crew can’t work in the cemetery every single day, he said.

“I think the average stone is probably at least 200 pounds,” Patch said. It usually takes two or three men to push the stone forward, he said, and then they have to fill in behind it with gravel and dirt. The average job takes 15 minutes, he said, and the more difficult ones take a half hour.

Syracuse Catholic Cemeteries Director Mark Barlow, who is responsible for 16 cemeteries, said he is thrilled by the work of Project Joseph. His office has its own workforce, Barlow said, but those workers are often busy with interments, entombments, mowing, and trimming. Project Joseph takes some of the work off their plate so that they can beautify the cemeteries in other ways.

There are thousands of graves at St. Agnes Cemetery, including many that date to the 1800s. The “winter slide,” as Barlow called it, has hit some of them very hard.

So far, Project Joseph has repaired close to 400 gravesites, even though it is not necessarily the cemetery’s responsibility to fix damaged monuments, he said. When the monuments are extremely large, the cemetery calls the family and a monument dealer comes in with lifting devices. “If they are a size we can handle,” Barlow said, “we’re more than happy to put them in good repair.”

The cemeteries provide Project Joseph with bars and blocks so that the monuments can be righted, he said, “but they … put in the elbow grease and the sweat.”

Barlow also praised the leaders of the crew. Patch, he said, is “a stand-up person.” Mike Caruso, Project Joseph crew chief for CCOC, is “very engaged and cares about the work he and his crew are doing,” Barlow added.

“We would very much like to continue this work at the other Catholic … cemeteries throughout the diocese,” Melara said.

The Project Joseph workers will not be idle after the St. Agnes Cemetery effort ends in November.

Melara said his office has secured a contract to do sidewalk snow removal in designated areas of Syracuse.

“Once we bring them on,” he said of Project Joseph workers, “we want them showing up every day.”